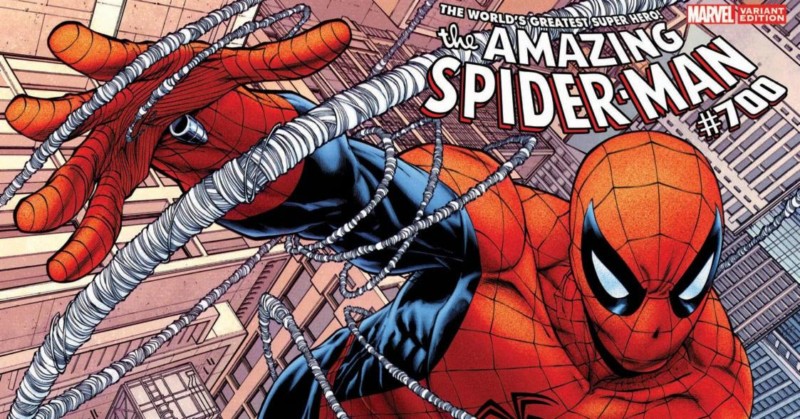 What do we (‘we’ meaning everyone), love about Spider-Man? Maybe it’s his resilience to bounce back after tragedies? Or the over-the-top supervillains he attracts? It could be his team-ups with just about every other character in Marvel Comics, right? How about his sense of humor? It’s almost definitely his powers. Or maybe we love Spider-Man for all those things and his ability to still be relatable to us despite what makes him super. No matter how we slice it, we love Spider-Man because he’s a person who could be our best friend, if our best friend were the greatest superhero of all time.

We Love Spider-Man Because He’s Relatable

Peter Parker could walk past us on the street or sit next to us on the subway, or on a bus, or in class, and we wouldn’t notice. Peter is a regular, kind of nerdy guy standing at 5’ 10” with a slinky build. He doesn’t look absurdly ripped or abnormal in any fashion. Peter is no different from any of us going through life, with trouble balancing relationships, work, and our own goals.

Starting out as a pizza delivery boy, Peter Parker is relatable to working class people everywhere, especially when you juxtapose him with his powerful, billionaire, superhero peers like Iron Man and Black Panther. There is an element of realism in Spider-Man because he needs to work while being a superhero. Also, when you compare him to godlike characters such as Thor or Superman, Spider-Man’s powers are more realistic and logical. While he does have the proportionate super strength of a spider, it’s proportionate to the size of an average human. Spider-Man retains his humanity because he has limitations on his superpowers, making him relatable to real-life humans with limitations. This realism and humanity in Spider-Man’s character are why he’s so relatable and why we love the web-slinger so much.

Who Doesn’t Love a Sense of Humor?

One thing everyone can adore is a sense of humor. Spider-Man may not have a dark sense of humor like Deadpool, but he’s great for comic relief. When the moment calls for it and we’re in need of a serious lift-me-up, Spider-Man’s there. It goes back to how relatable he is; can we seriously be friends with a Batman who’s serious 24/7? That’s where Spider-Man comes in. He cracks jokes while busting bad guys and uses his quick wit effortlessly. Not to mention, whenever there’s a mash-up with another superhero, the jokes are endless.

READ: SPIDER-MAN: HOMECOMING might be a Miles Morales story!

All jokes aside, literally and figuratively. Spider-Man’s comic relief is more telling than we might have assumed. Sure, he cracks jokes, but did you ever notice it’s almost always when he’s in a bad or awkward situation? His humor is a ‘tell,’ in a sense. If Spider-Man is able to make a joke out of a bad situation, then it’s something he can handle. Also, think about when he doesn’t take the opportunity to crack a joke — the situation is usually more serious. Plus, he usually lets us know when he’s out of trouble when he slides in a timely zinger. We love Spider-Man and his use of comic relief because with great humor comes great responsibility. Okay, that pun was awful, but don’t lie — we all know Spider-Man would have done it, and he probably would have done it better.

His Powers Are Pretty Cool

Spider-Man has the coolest powers ever created for a superhero. With all of the powers of a spider, he can cling to walls and acrobatically leap from place to place. He’s equipped with super strength, healing, and agility. Plus, we can’t forget to mention his spidey-senses, which enhance his human senses. Also, with a genius-level intellect, Spider-Man created one of the best tools used by a superhero, the web-shooter. If there’s one thing we love about Spider-Man’s abilities, it’s his use of the iconic web-shooter and his webbing itself.

While Spider-Man’s powers are cool and effective, as a superhero, he uses them creatively. Since he isn’t overpowered like some of his peers, Spider-Man has to be creative. Although he has a healing factor, bullets can’t bounce off of him like Luke Cage. He has to use a combination of his agility, aerobatics, and spidey-senses to dodge them. Let’s not forget he can’t fly; instead, Spider-Man uses New York City’s landscape to swing from place to place.

READ: How much is too much? SPIDER-MAN: HOMECOMING trailers show a bit too much!

This all goes back to his relatability. Even as a superhero with powers, Spider-Man has limitations. Because of his lifelong mantra, “with great power comes great responsibility,” Spider-Man doesn’t act with reckless abandon. He takes the responsibilities of his powers seriously, and they sometimes carry guilt, too. Even though he can use his powers to save people, he knows he may not always succeed. For example, when Spider-Man uses his powers to try to save Gwen Stacy, he ends up snapping her neck, killing her. While he has superpowers, he knows what can happen if he uses them irresponsibly. Thus, he puts limitations on them.

We love Spider-Man as a solo act, but he’s also great as a partner and a teammate. Since his creation, Spider-Man has teamed up with just about every relevant superhero ever, including all of the Avengers, The Human Torch, Deadpool, most of the X-Men. He has even been able to team up with other heroes outside of Marvel, like Superman in the 1976 issue SUPERMAN VS. THE AMAZING SPIDER-MAN. Spider-Man’s team-ups may seem like pointless, mind-boggling fun, because they are. Even as a part of the Avengers, he’s a fun guy who provides comic relief in bad situations.

Part of being a mentor is taking the lead, working together, and accepting your partner. Peter Parker does these things well, especially with other Spider-Men like Miles Morales. Peter mentors Miles because he is a younger and inexperienced version of himself. Furthermore, Peter drops in to help Miles balance his own identity as a Spider-Man. This also speaks volumes because Peter and Miles’s relationship serves as an acceptance of Miles as an Afro-Latino. Peter doesn’t reject Miles as a Spider-Man; he embraces him and forms a bond with him. Thus, their relationship as Spider-Men teaches us a lesson about race relations: even though we may look different, we can still accept each other.

Unlike the other characters in the Marvel Universe who have a villain problem, Spider-Man does not. In the Marvel Universe, there are too many heroes who don’t villainous counterparts the way Spider-Man has the Green Goblin. This is problematic because superheroes need archenemies to balance them out. Ask yourselves, do you know who Iron Man’s number one enemy is? Or the Hulk’s? Or Black Panther’s? Without a quick Google search, it’s hard to figure out. In fact, the Green Goblin is almost as popular as Spider-Man is because he matters as Spider-Man’s figurative counterpart. He is rich, irresponsible, and chaotic, while Spider-Man isn’t. They even know each other’s true identities, weaknesses, and backstories. Their relationship is a story of good and evil, not good versus evil.

READ: Get ready for SPIDER-MAN: HOMECOMING with its Top 5 exciting things!

It is also important to note that Spider-Man’s villains aren’t interchangeable with generic, traditional ones. They are unique with their own complex, morally ambiguous backstories. Whenever Spider-Man is tested by the resolve of a villain, he isn’t bogged down by simplistic binaries. This benefits Spider-Man by making him even more of a compelling and complex hero.

His Resiliency is Admirable

Peter Parker has experienced a lot of tragedies, but they have never stopped him as Spider-Man or dramatically changed him. We all know the Uncle Ben story, but we’re also aware that Peter Parker loses his parents twice. In AMAZING SPIDER-MAN ANNUAL VOL. 1 #5, he discovers they were CIA agents who saved the country by being proclaimed traitors. Peter goes to Algeria, thinking they are alive, only to find that they have been killed by the Red Skull. Knowing they died for their country, Peter clears their name, but the hope that he would be reunited with his parents has vanished. While this isn’t the worst tragedy he’s been through, it could certainly make anyone lose hope and become pessimistic. However, Peter Parker stays hopeful and honors his parents’ memory instead. That kind of resilience is admirable.

A darker tragedy that really proves Spider-Man’s resilience is the way he responds to the death of the love of his life. Gwen Stacy’s death is Spider-Man’s toughest tragedy to overcome. As previously mentioned, her death was partially caused by Spider-Man, who tried to save her but accidentally killed her by snapping her neck. However, he responds resiliently to his involvement in her death. Spider-Man doesn’t become a recluse or stop trying to save people. Instead, he acknowledges his limitations and never stops being a hero. He even finds love again by opening up and having an expanded relationship with Mary Jane. For that reason, we too will love Spider-Man.

We Won’t Stop Loving Spider-Man, Ever!

We love Spider-Man and everything about him. From his mentorship with Miles Morales to his resilience after the death of Gwen Stacey, he’s a stand-up guy. There are 3 film franchises, countless comics, and a Broadway play about our favorite web-slinger’s adventures. Let’s not forget his lasting battles with the Green Goblin and the time he met Superman. What’s most important about Spider-Man is that he’s relatable, like our best friend. He’s a superhero, but he’s also working man who’s hilarious, smart, and brave. For that reason, we’ll never stop loving Spider-Man.