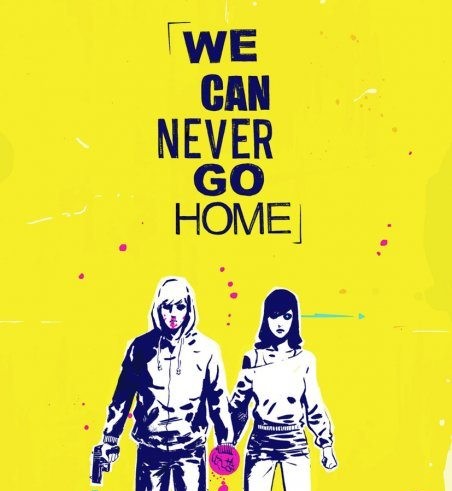 This past Wednesday, along with my regular pulls, I picked up the first volume of WE CAN NEVER GO HOME on the recommendation of one of the people at my local comic shop. WE CAN NEVER GO HOME is one of the eleven current books being put out by Black Mask Studios, a fairly new publisher dedicated to bringing a punk rock ethos into the world of comics. As soon as I read the first page, I couldn’t put it down.

Holy hell: This is one of the greatest books I’ve read in the past couple of years.

WE CAN NEVER GO HOME is a story of unbridled teen angst, complete with sex, superpowers, and a loaded handgun. It is through these three components that we discover exactly how to navigate adolescence with the addition of being wanted fugitives. 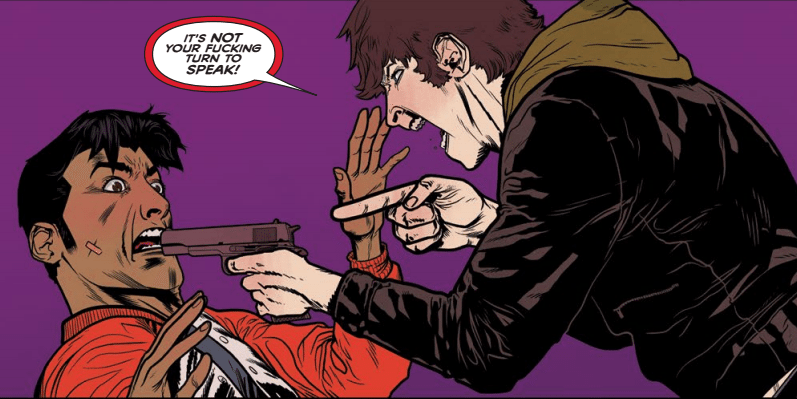 The year is 1989. We are in a small suburban town in Ohio. Our “heroes” are eighteen-year-old Madison and seventeen-year-old Duncan, and the contrast between them is stark. On the surface, she has everything that he does not; loving parents, a partner, money, good grades, and superpowers. We are given a very limited window into Duncan’s life, but the view we get is a depressing one. After the death of Duncan’s father, the two set out on the open road, and we learn that they are really not as different as they seem.

READ: Like indie comics? Check out our review of BOB: NON-UNION PSYCHIC!

The comic’s predominantly male set of creators does a fantastic job of crafting Madison as a strong and independent woman of color from the very first page. As an Asian woman living in a predominantly white suburban environment, Madison is forced to endure a great deal of objectification at the hands of her jock ex-boyfriend and a handful of guys who he’d probably get along with handsomely. Her ex’s douchebaggery sets the stage for five whole issues of Madison’s ass-kicking, take-no-shit attitude. 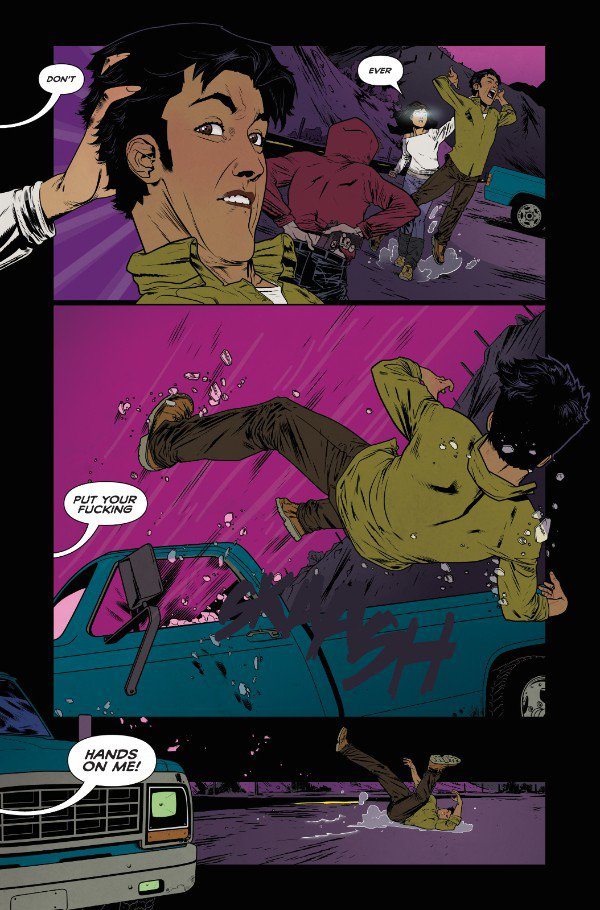 When Madison picks out her super-hero costume—in a scene that pays homage to Carol Danvers’ Ms. Marvel, as well as Wonder Woman and Tank Girl, among others—she follows a much-appreciated recent trend superhero comics, dropping the standard mask-and-tights combo in favor of a functional hoodie and jeans. WE CAN NEVER GO HOME can be read through a feminist lens because the actions of each of the book’s strong female characters, regardless of their implications, are backed with a great deal of agency. Though there are romantic undertones, Madison doesn’t need a love interest to remain a strong character. It’s clear that Madison’s adoptive mother rubbed off on her, but in the interest of avoiding spoilers, I’ll just leave it at that.

WE CAN NEVER GO HOME is also distinct in spanning multiple forms of media. The comic itself is wonderfully executed. Artist Josh Hood’s style fits this story perfectly, with expressive linework that gives a certain sense of depth and personality to the characters. Colorist Amanda Scurti employs a focused and dynamic range of colors in order to make the characters emotive and the backgrounds pop. In tandem, the two work together to craft panels fitting of the narrative provided by writers Matthew Rosenberg and Patrick Kindlon. 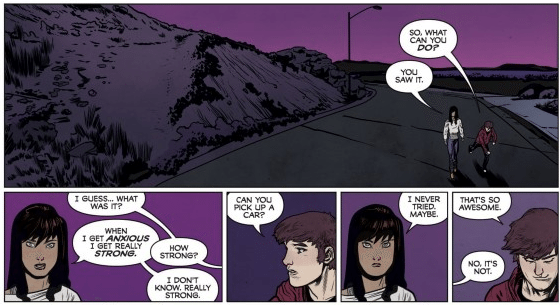 In order to immerse the reader in their narrative, the creative team has also put together a set of companion playlists. The track list can be found close to the back of the trade paperback, but it’s also available on Spotify. Each of the five playlists (one per issue) is chock-full of angsty, mad-at-the-world punk anthems by bands like The Descendents, The Clash, Killing Joke, and Fugazi.

WE CAN NEVER GO HOME is the perfect escape for the reluctant realist. Rosenberg and Kindlon make it very clear that superpowers are just as exciting in a real-ish world as they are in the middle of enormous cross-dimensional space epics. The two also set up multiple cliff-hangers that just beg to be answered. And don’t worry: Even though it isn’t printing right now, WE CAN NEVER GO HOME busts back into your local comic shop later this year.