With the release of the newest Disney film MOANA, tidal waves of change have struck the animation industry. By focusing on the South Pacific culture within the movie, being culturally aware, and diversifying not only what is being done on screen but behind the scenes as well, MOANA is shaping up to change the world of Disney animation, and by extension the animation and entertainment industry as a whole. 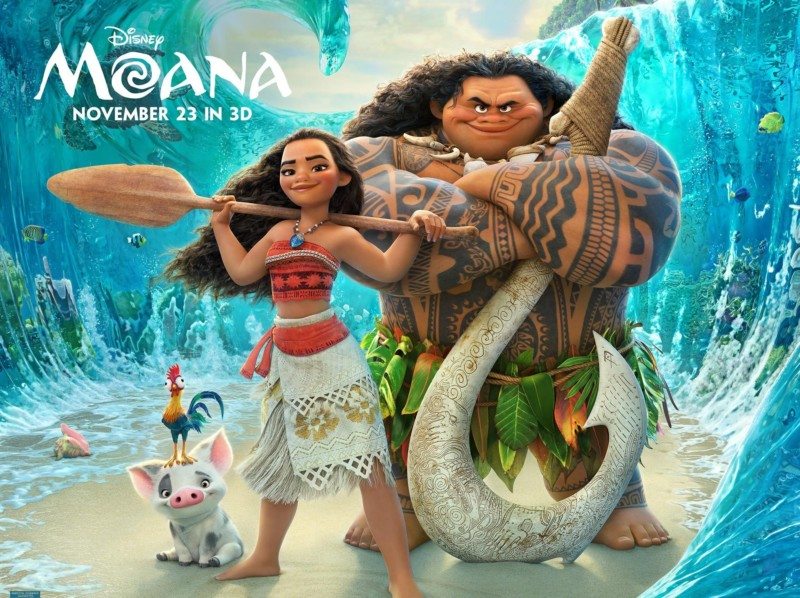 The idea that would become MOANA was pitched in 2011 by Ron Clements and John Musker, the geniuses behind beloved Disney classics such as ALADDIN and THE LITTLE MERMAID. Clements, Musker, and a team of other animators traveled to various locations in the South Pacific to bring to life the visuals, music, and culture of MOANA. The movie’s research motto, “In order to know where you are going, you need to know where you come from,” inspired the team to search for the authenticity that would not only pay homage to Southern Pacific culture. They achieved this accuracy by working with the Oceanic Story Trust, a team of local experts, to assure the history and culture in MOANA was spot on. The animators were advised on everything from character names to dialogue to customs of the South Pacific.

READ: Looking for another great movie to see this November? Check out FANTASTIC BEASTS AND WHERE TO FIND THEM and read just how fantastic it is right here!

The movie’s plot is based on an old Southern Pacific legend: Two thousand years ago, the Southern Pacific was home to the greatest explorers on Earth, people who only had the use of the stars and currents to explore the Earth. Then, one day, it just stopped. No exploration, no migration, nothing for a thousand years. Through MOANA, Clements and Musker tell the story of why this came to be.

With this idea, the two were able to move forward with the finer details of the movie, such as characters. Maui, the movie’s second leading character, is actually based on a prominent figure in Polynesian mythology. Originally, Maui was a powerful god armed with a fish hook who was said to have helped bring the South Pacific islands from the depths of the ocean. Upon learning of the hero, Clements and Musker sought to bring the larger-than-life character to the big screen. However, as images of Maui were revealed to the public, the character came under some scrutiny for his physical size. Many men took offense to the character’s bulk, claiming the character represents men from the South Pacific as obese. Disney responded to these claims by saying Maui was designed to represent the strength and physical range the character possesses, not to antagonize any previous stereotypes.

Another issue surrounding the character of Maui was the Halloween costume Disney designed for the character. Cultural appropriation (the use of elements of one culture by those outside the culture) was the main concern surrounding the costume. The practice of cultural appropriation is wrong because the manner in which the elements of the borrowed culture are used fail to convey their original significance. Thus, when other cultures utilize these elements by manipulating them for a specific purpose, it is seen as disrespectful to the culture attempting to be imitated.

While there are other instances of cultural appropriation throughout the year, it is especially prevalent during the Halloween season. There is a fine line between dressing as a character to pay tribute to them and disrespecting the culture that is being represented through them. Certain costumes can portray the message that by recreating this character through dress only leaves that culture with cartoons and caricatures to act as their legacy. The Maui costume was one of these instances. The costume caught attention on Twitter, where many protesters proclaimed, “Culture is not a costume.” Featuring a brown shirt and pants decorated with Maui’s tattoos, Disney acknowledged the offense that had been taken by issuing a statement: “The team behind ‘Moana’ has taken great care to respect the cultures of the Pacific Islands that inspired the film, and we regret that the Maui costume has offended some. We sincerely apologize and are pulling the costume from our stores and web.”

READ: Should animation be turned into live action? Find out one perspective here!

In contrast to his physical size and costume, other aspects of Maui’s animation have been applauded for their adherence to South Pacific culture. The tattoos decorating Maui’s body are a visual backstory depicting the mythology and origin of the character, telling the tale of the mighty Maui and his many adventures and accomplishments as a demigod. While there is one nondescript tattoo among the others—a Mini Maui who acts as Maui’s conscience can be seen running across the character’s skin—the animators were thoughtful in their approach to bringing the myth to animated life.

Along with being detailed-oriented in the development of the story and characters, the animators also sought to ingrain the movie with people who would add another layer of depth to its production. In choosing the actors and actresses who would voice their characters, the casting department wanted to evoke a sense of cultural authenticity that would extend just as much off-screen as it would on screen. Thus, the entire voice cast of MOANA features people of color who are descendants of the South Pacific. Breakout star Auli’i Cravalho, the voice of Moana, is a fourteen-year-old Hawaiian native, and Dwayne “the Rock” Johnson, of Samoan descent, voices Maui. Other voice actors and actresses of the movie include Jemaine Clement, Temeura Morrison, and Rachel House who all hail from New Zealand and are part Maori.

A recently released animated film by Laika/Focus Features, KUBO AND THE TWO STRINGS came under great scrutiny regarding the casting decisions made. The movie is based in ancient Japan but was voiced by a cast of primarily white actors and actresses. The argument has been made there are more than enough Asian American actors in Hollywood nowadays to have been cast in a movie whose setting was in Asia. While there are Asian American voice actors in the movie—George Takei, Cary-Hiroyuki Tagawa, Minae Noji, among others—they are secondary characters. The Media Action Network for Asian Americans (MANAA) has criticized Laika for the lack of screen time the Asian American voice actors received compared to the white actors of the movie. KUBO director, Travis Knight, has spoken on behalf of Laika and said, “The critical conversation around diversity is one Laika cares very deeply about.”

Conscious of the strides they and their competitors were taking regarding voice casting, Disney has also sought to make the music in MOANA as authentic as possible. One of the three trips the animators took to the South Pacific was specifically geared towards music, wherein they learned the traditional elements of Southern Pacific music. With a better understanding of the music, the animators came back and assembled a team they believed could do justice to the movie’s music. The three principal members of the music squad are Opetaia Foa’I, the founder and lead singer of popular Pacific band Te Vaka; Mark Mancina, Grammy-winning composer who wrote for the LION KING; and Lin-Manuel Miranda, the star and author of the musical HAMILTON. Together, the three have come together to create a musical that is both new and traditional, rooted in an antiquity of a culture and honoring a tradition of visual storytelling. Maui will even be given the honor of being the first character to rap in a Disney movie!

Disney is forging a path that will define the next generation of animated movies with its release of MOANA. Even now as MOANA is being released into theaters, Disney is working on another film called COCO that is inspired by the Hispanic holiday of Day of the Dead. Like with MOANA, producers and animators on the team have done extensive research on the customs and culture surrounding the holiday in order to pay the proper respects to its roots, marking the start of a welcome trend.

By educating themselves and their audiences on the culture surrounding these movies, Disney is issuing a challenge to other animation companies, and really Hollywood at large, to step up their game by being aware of what they are producing, who’s producing it, and who they are producing it for. Audiences aren’t one ethnicity so the movies being produced for them should not just be made for and by one ethnicity. The problem of whitewashing—the casting of white actors in non-white character roles—is a problem Hollywood has failed to expunge with the evolution of time and film. It is well past due for the entertainment industry to extend opportunities for visual representation and give the proper respect to those representations. Simply because the movie’s setting is a bit more exotic than audiences are typically used to and characters are created that fit the environment does not mean the culture has been paid its proper dues. It is about acknowledging the roots within the culture of that area, becoming intimate through overcoming ignorance. Ignorance plagues the film industry at large because homage is paid to the beautiful geographic locales of these cultures, but not to the cultures themselves.

READ: Interested in finding a new show to watch? Check out CHANNEL ZERO!

There is no excuse for whitewashing in entertainment, whether it’s casting or production. We live in a time where diversity is beautiful, all-encompassing, and a wonder to behold. As a viewing audience, it is our duty to uphold a standard of not only cinematic excellence but one of respectful production as well. When pondering over whether or not to see a movie, it should be our obligation as an audience to do our homework on what the story is about in order to pay our own respects to the culture being brought to life. By doing their part and continuing to evolve their production practices, Disney is becoming a more thoughtful company with each film it creates. So as a Disney fangirl, I can proudly say that when I buy my ticket to go see MOANA, I am not only paying to see a movie, but paying to see authenticity.