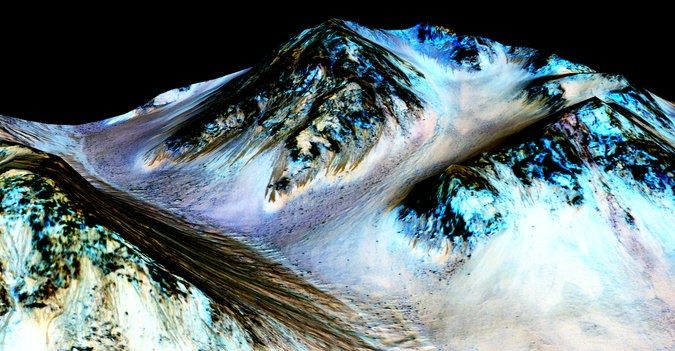 H2O! Woop there it is!  Mars, apparently, has water and with that, possibly life; most likely, of the “unseeable” microorganism kind.  Alas, this is a huge development.  NASA has been divulging incredible information this year, even with their well documented funding cuts.  First in March, with one of Saturn’s moon, Enceladus, which harbors an ocean underneath  its thick icy crust and may have hydrothermal activity.  Then in July, with images of Pluto.  Its heart shape on its surface took the internet by storm.

All these discoveries are truly amazing.  In fact, amazing is an understatement, but I can’t help but have an Earth-first mindset. They say curiosity killed the cat, well I think that saying applies to humanity more.  Cats shouldn’t be the patsy for that phrase.  It’s demeaning to them.  For as long as we existed, humanoids have invented tools, learned survival techniques, and continue to explore beyond what was originally our limits.  We continue to push the boundaries, which is cool, but also terrifying.

Let’s say we find life on Mars, or even Enceladus.  Then what?  Do we bring it back?  How can we be sure that life-form won’t completely destroy us.  We have no idea how that organism would react to our already fragile environment.  What if it’s a deadly unstoppable parasite or an indestructible strain of bacteria?  These are worse case scenarios of course, but even the smartest minds would agree that a devastating outcome is possible.

Humanity doesn’t even know enough about our own environments, organisms, or atmosphere to even conceive the impact of researching and importing extraterrestrial life.  We’ve displaced animals and plants into foreign landscapes and have witnessed collateral damage to the natural species.  A high percentage of scientists say we are responsible for at least inducing the 6th mass extinction from overpopulation, over hunting, deforestation, pollution, etc.

National Geographic just released their own discovery: BIOFLUORESCENCENT HAWKSBILL SEA TURTLE.  And yes, I like turtles, much more than outer space, but that’s not the point.  This turtle, whose species is critically endangered, was the first reptile ever recorded that is bioflourescencent, an aspect that only recently has been researched.  What this tells me, is that humanity still has so much  to learn about our nature and our living organisms.  Bringing any possible found alien organism here could be catastrophic.  There are just to many unanswered questions to take that risk.

As you know, the world of comics has dealt with an infinite amount alien life.  DC comics has heroes like Superman, the Green Lantern Corps, and Martian Manhunter.  J’onn J’onzz is the lone Martian hero in the DC universe.  However, Mars plays a vital role in Watchmen, as Dr. Manhattan goes to there to contemplate his life and knowledge of the universe.  The backdrop of Mars is arid and lifeless, but for Dr. Manhattan it’s the perfect retreat.  As he looks back on the past and his existence, he constructs this giant clock structure with twirling parts and turning gears.  He eventually brings Silk Spectre up there with him and they argue about the future of civilization and its inevitable collapse.  He tries to show her the meaningless in it, but in doing so he himself has a revelation and returns to help. 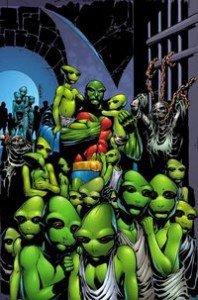 J’onn J’onzz, the Martian Manhunter, has gone through existentialist thought himself.  Unlike Dr. Manhattan’s version of Mars, it’s not a place of peace.  It’s a place of disaster.  In his original 1956 run, J’onn gets sucked to Earth from Mars, by an experimental teleportation device.  In this conception, Mars was not a dead planet, so J’onn fought crime, as he waited for Martian technology to get him back home.  Recently and more famously, J’onn Jonzz has come to Earth because he believed to be the last Green Martian alive.  On Mars, there are two species of Martians:  Green and White.  They both come from a race called The Burning, who the Guardians of the Universe (heads of the Green Lantern Corps) monitored and decided to genetically alter them to qualm their immense belligerence and asexuality.  The genetic intervention caused them to split and evolve differently. Both essentially have the same abilities and vulnerabilities,  yet they differ in temperament.  The White Martians are ruthless war mongrels bent on destruction and violence.  The Green Martians are family and community orientated, and they were in constant battle for survival.  J’onn, amidst the chaos, believed he was the only survivor and fled.

There’s also third species of Martian who are more humanoid called the Yellow Martians.  They are also more of a belligerent race and tried to take over Earth before Wonder Woman’s intervention.  They currently don’t have a connection or continuity to the DC universe.

Currently in a long past due revived Martian Manhunter series, with #5 coming out 10/17/2015, (which I’ll be reviewing for ComicsVerse) J’onn seems to be manipulated and controlled by the White Martians, as they slowly turn him into an indestructible weapon.  Mars doesn’t seem to be dead all at and Earth is in its tracks.

DC comics have treated Aliens with caution, even Superman.  One of the most powerful evil deities, Darkseid, is an alien.  Water on Mars is extraordinary news, but nature doesn’t have rules.  The alien we may eventually find doesn’t have to be a 10 feet conqueror to end our curious human civilization, it can be a microscopic spec that could sweep us all away.  After all, we barely know our own home!

Stay on the look out for a “Marvel Comics with Mars” edition!