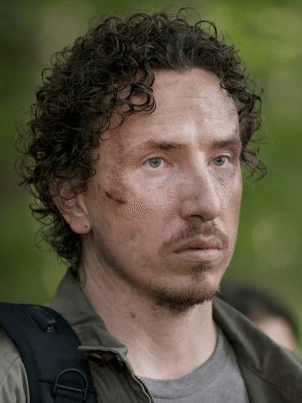 During World War One, three hundred and six British and Commonwealth solider were executed for committing crimes of desertion and cowardice. Civil War deserters and cowards were punished with brandings and death sentences. General George Patton once slapped two soldiers during World War Two for believing they were cowards after they said they were fatigued. The theme here is that cowardice in our world is considered to be a common and profound human failure. This is no different in the world of THE WALKING DEAD. To survive in the zombie apocalypse, bravery is a necessity. Survivors in THE WALKING DEAD are indeed at war. At all times they are fighting against the walkers and, worst of all, other people. Cowardice is unacceptable in THE WALKING DEAD, so it is essentially a villainous crime when we see it from Nicholas. To understand Nicholas’ cowardly attributes, it would be beneficial to look at the attributes that make someone courageous and see where Nicholas went wrong.

Nicholas, played by Michael Trayner, is a much more relevant character in THE WALKING DEAD TV series than in the comic book series. In the comics, he is a resident of Alexandria when Rick and his group arrive. He still is a villain, but his only real moment of significance is when Carl and Mikey (Nicholas’ son) get into a fight and Nicholas confronts Rick about it.  Beyond that short moment, Nicholas just blends into the crowd and fights on behalf of Alexandria. However, in the TV series, Nicholas plays a bigger part in the second half of season five and the first half of season six. He is one of the Alexandrians who goes out on runs to look for supplies. When Rick’s group arrives to the town, he grows resentful of them after realizing that he is inadequate in comparison, especially to Glenn. His resentment goes so far as to argue for the group’s exile from Alexandria. Also, Rick’s growing power and intervention in the town becomes problematic for Nick. This new way of life in Alexandria reveals how much of a coward Nicholas truly is… 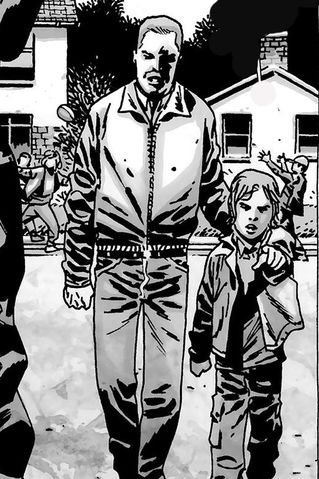 Feeling Fear Yet Choosing To Act: The first time we get to see Nicholas in real danger, he is assigned to go on a run with a team that includes Aiden, Eugene, Glenn, Tara, and Noah. They get to a warehouse and an explosion accidentally occurs. Chaos is everywhere with Aiden impaled, Tara unconscious, and walkers on the attack. The group decides to try to save Aiden, and this is where we first see Nicholas’ cowardice. The walkers are drawn to Aiden’s screams as he is being saved. Nicholas becomes too afraid and instead of continuing to help Aiden, he runs away. If he had chosen to stay, he would’ve been courageous like Glenn.

READ: Caught up with THE WALKING DEAD TV show? Read our review on the season six finale!

Persevering In The Face Of Adversity: When Nick retreats from Aiden, helping Aiden has become hopeless, so Noah and Glenn follow suit. The three of them get trapped in a revolving door, which is an incredible scene. The escape turns dire when the walkers are advance and push against the door. If the door gets pushed one direction, Nicholas would die. In the other direction, Glen and Noah would die. Glenn devises a plan for all of them to live. Nicholas has other plans. Instead of persevering in this trial, he busts through on his side. This pushes Noah to his death by the zombies. The coward makes sure he survived, when they all could have. 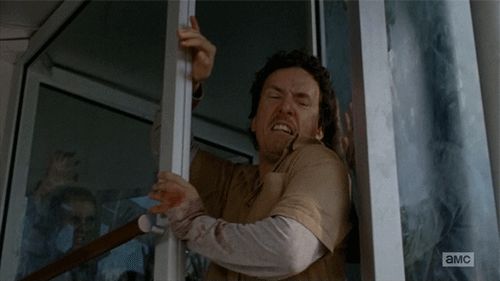 Standing Up For What’s Right: After the deaths of Aiden and Noah, Deanna interviews everyone involved in the supply run. During the interview, Nicholas does not stand up for what’s right and blatantly lies about the events. He puts no blame on himself whatsoever. The story he recounts to Deanna puts Glenn at fault. Why does he lie? He’s possibly too afraid to tell the truth and face the repercussions that would result from his cowardice.

Following Your Heart: Nicholas is too much of a coward to do the things he wants. This is evidenced when Rick is pummeling Pete on the streets of Alexandria. Nick looks as though he wants to save his friend Pete from the enraged Rick. However, Nicholas backs off and just stands outside the fight. If he had an ounce of bravery, he would have tried to stop Rick like Carl, Jessie, and Michonne had tried.

READ: In THE WALKING DEAD Pete Anderson is a villain! Find out why!

Expanding Your Horizons, Letting Go Of The Familiar: Nicholas cannot handle this new way of life that comes with Rick’s group. Rick’s group brings courage and strength to the town. These are things Nicholas has no inkling of. He could have taken a backseat or tried to conform to this new life, but instead he takes the coward’s way and takes out his frustrations on Glenn. He sees Glenn as everything he is not, so he attempts to catch Glenn off guard and kill him. Even refusing to confront Glenn face to face is cowardly. 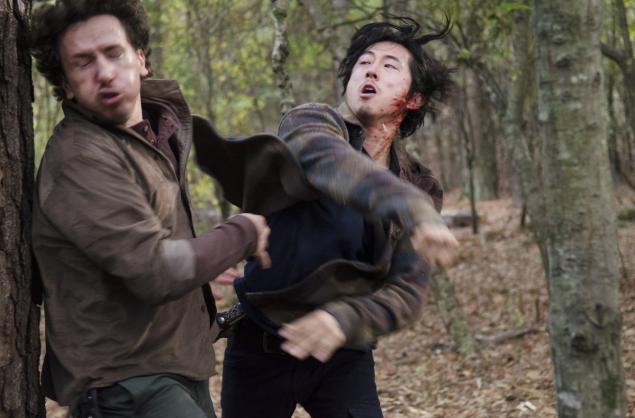 Facing Suffering With Dignity Or Faith: Nicholas’ death is very telling on how cowardly he actually is. While standing on top of a dumpster with Glenn and surrounded by walkers, Nick takes his own life. He commits suicide because it seemed as though there was no way out of certain death. He wanted to prevent the suffering that comes from being eaten by zombies and ultimately turning into one. He goes out the way he lived, a coward. He does’t even try to figure out how to survive with Glenn or, if he was determined to shoot himself, try to just help Glenn out of the situation. 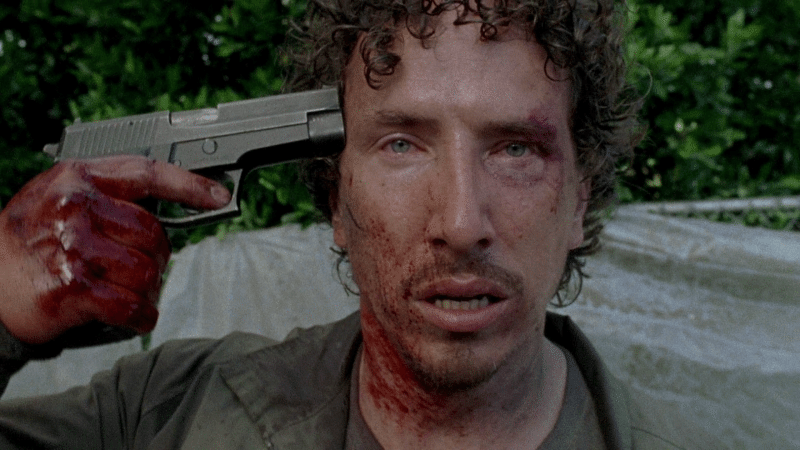 Nicholas completely fails when we look at the six attributes of courage. His role in THE WALKING DEAD is that of a coward. His cowardice is a dangerous problem for the Alexandrians and is unacceptable to keep their safety. Cowardice is looked down upon in our society and no different in the zombie apocalypse. Nothing good comes from his cowardice, which results in the deaths of Aiden and Noah. It almost brings Glenn to his death on two occasions. It just gets people killed. Courage is what people need in this world, not cowardice.