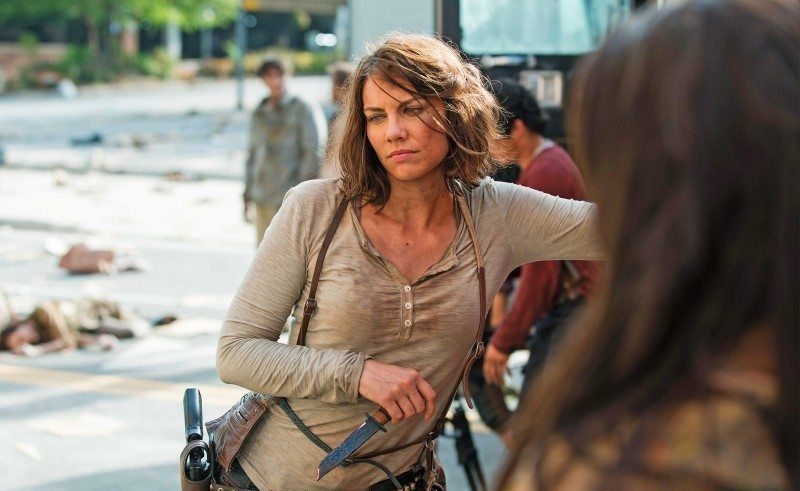 Coming off of Morgan’s story last week, I think we all expected the following episode –  titled “Now,” to flip the switch to rock and roll and crank the crazy! After all,  the show’s opening revealed Rick running frantically from a veritable wall of Walkers lurching towards Alexandria. After a severe series of setbacks – we were finally about to witness the tragic consequences of Rick’s somewhat botched plan to deter the army of the undead from Alexandria. It was an interesting turn however, when we were given what appears to be a LOT more runway within that story-line. Sadly, I’m unsure of as to whether or not this is a good thing…

I must admit, I found “Now” to be a somewhat frustrating episode… It almost felt like a small step up from last week’s “Morigin Story” (Get it!? Like… like Morgen’s origin story? You get it.) which, too, brandished a similarly slow pace. However, that step back was a truly captivating episode. It provided a ton of backlogged information on a beloved character of the show. Morgan’s awesome!

However – we found ourselves smack-dab in character developmentsville this week, which was … surprising. I mean, the dang thing starts off with Rick sailing down the street, thousands of the undead in tow! I was THRILLED when our band of Quarry walkers finally ambled up to the gates of Alexandria, thinking we were about to see a major, major battle. Five episodes in and we’re ready to wrap up this situation – and move on the next. Yeehaw! Maybe I’m just fidgety, but what can I say? I love a change of scenery…

But instead of seeing this gigantic zombie problem bloom – we spent some time hopping around Alexandria, learning a bit more about, well… the Alexandrians! Denise and Tara shared a very touching moment, with Tara inspiring Denise to continue to save lives. Carl and Ron got into it, though Ron is ironically the more level headed one between the two – as Carl is making moves on a plan to locate Enid outside the walls. We spent some time with Rick and Jessie, who finally fucking kissed. It was a hot and heavy episode, to be sure! Jeepers, by the end of the whole affair I needed an exaggeratedly large ostrich feather to quell my vapors!

Deanna has also snapped. No, seriously – like a freaking Slim Jim – she has SNAPPED. I thought this was interesting angle for her character – who for the longest time seemed to be a very strong leader despite Alexandria’s short comings… she’s been dealt too much too fast, however. It’s just too much for her character – and now we’re treated to this genuine uneasiness whenever she appears on screen. She spends most of the episode just, kinda, creepin’ around… and she really creeps. You can smell the drastic decision she’s probably going to make coming… and it’s so unnerving.

Overall, though this was definitely an oddly slow episode – moving through the many character pieces “Now” consisted of can also be viewed as a good thing. I get the feeling that this episode was so loaded in emotional reveals, because it’s becoming apparent that some MAJOR carnage is coming this way… Death is literally beating at the door of Alexandria. No better time than “Now” (hey there!) to provide an even clearer perspective of where our characters are at in the rising tide of what’s to come…

And the biggest and most important reveal of the episode was well handled, in my opinion, which was clearly the confirmation that Maggie, who is struggling with the belief of whether or not Glenn is still alive, is pregnant. This was something hinted at rather vaguely in an earlier episode, and after a long and tense search for a back exit out of Alexandria through the sewers…  Aaron brings it home with an incredibly sweet comment. Baby’s out of the bag!  Maggie is indeed pregnant. I felt this news came at such a strategic time, because much like Maggie – the audience needs more to hold on to within the “Where is Glenn” storyline… this raised the stakes so much more, and now we REALLY need Glenn to be alive. I only wish the Maggie and Aaron subplot provided some solid closure to whether or not he is…

In the end – this episode was emotionally charged, which may or may not be what the viewers were primed for this last week. However,  some major reveals kept this bad boy afloat. Let’s just keep our fingers crossed for some more electricity next week. We’ve been spoiled! You can’t go from “Quarry Walkers” to “Feelings Town” without it being at least a slightly bumpy ride.