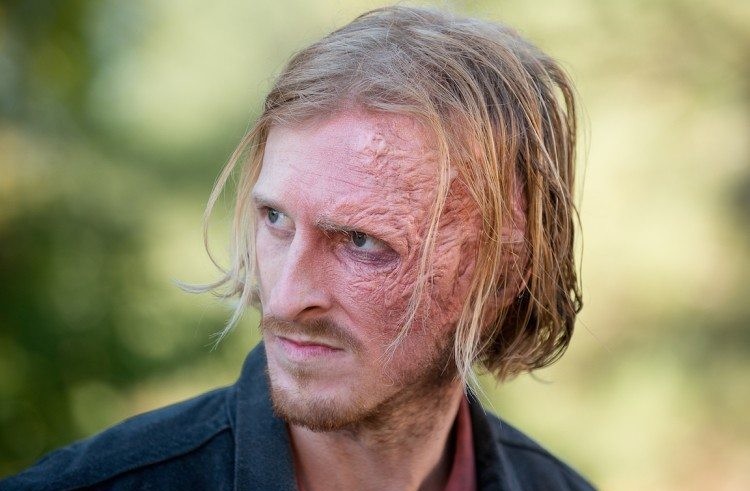 CLICK: Our review of last week’s THE WALKING DEAD!

For those following our weekly coverage of THE WALKING DEAD, last week we watched as Carol, once again, absconded into the night, leaving Team Grimes behind. This time, she’s  dealing with the moral dilemma of necessary killing in the zombie apocalypse.

This week we begin on a cold open leading an installment that is shrouded in more mystery than revealing plot details. The cold open in question? A cloaked confrontation between Carol and a few of The Saviors, which we later see fully play out. Despite this, we frustratingly continue through “East” with no further information on Carol’s whereabouts. Though this is the penultimate episode of Season Six, we still have yet to see Negan. Not that the cliffhanger in “East” wasn’t enough, which left the audience to wonder if Daryl has been killed.

The majority of “East” revolves around a  few hastily thrown together search parties on a mission to find Carol. I diagnose Team Grimes’ search plans as ‘hasty’ as the top of the episode literally has a scene in which Rick himself exclaims that should any threat fall upon Alexandria, the Alexandrians can handle it. He believes them to be ready to take on anything; “The world is ours. We know how to take it.” are his exact words.

Oh, how wrong he is.

A glaring example of this? Most of Alexandria’s greatest warriors immediately race out to find Carol, leaving few behind to defend the walls. As well, The Saviors continue to get the drop on some of the show’s top-billing badasses again and again. Lately, it seems that every time our heroes stand still in an exposed area outside of Alexandria, The Saviors are magically hiding behind nearby trees, only to seconds later hogtie them. It’s just frustrating, in my opinion, to see this scenario happening so… cyclically. I feel as though our heroes are better than this, right?

Perhaps the exercise in hubris is warranted. Rick at the start of the episode is being, well, a little cocky after all, but we have to remember that he still doesn’t maintain a true grasp on the threat that Negan and The Saviors will soon brandish. Strategically speaking, this is definitely servicing the build-up to Negan’s arrival in a big way. I think my biggest concern is, once Negan arrives and undoubtedly makes his grisly first impression, what then? Are we going to just go through the motions as we have before a’la The Governor? Or are our new “super villains” going to gain a little more depth? Time will only tell as to whether or not there’s any real narrative potential to be had here.

Once again I must tip my hat to Melissa McBride, who had the best sequence tonight hands down. Though Carol’s moral struggle with killing people seems to have come from nowhere, her nervous breakdown moments before taking out a group of Saviors by herself was absolutely convincing. This is a woman who knows she can do terrible things to survive. Even worse, she’s aware that she can do those terrible things really well. She legitimately seems to want to avoid killing any more than she needs to, and yet the world of THE WALKING DEAD keeps tossing baddies in her path whom she then expertly destroys. Again, kudos to McBride.

Random note, but props to the production design team behind “East” as well! Carol had spikes sticking off her car, a sort of Mad Max-ian twist on a VW Golf. Sincerely, it was the most badass hatchback I’ve ever seen.

Overall, we have plenty of questions going into the final episode of Season Six. We’re all hoping to get an answer on Carol, and we better find out how Daryl is holding up (I believe we were thrown a bone on this, with Dwight uttering “Eh, you’ll be fine” after pulling the trigger on him). Furthermore, we witnessed Maggie crumpling over in pain near the conclusion of the episode. Is the baby okay? Is she okay? And oh yeah! What of Morgan? He and Rick split off, with Morgan heading out to continue the search. After some deep moments between the two in “East,” Rick more or less ended up requesting that Morgan promise his return to Alexandria. They go back a while, within this whole apocalypse thing… Personally, I feel it would be nice to see Morgan come back.

Sadly enough, another question remains, of which I’m a little afraid to know the answer. We’ve seen our heroes make some grim decisions over the course of this season, more particularly over the last few episodes, and now there will be consequences.  So, when Negan arrives – who will be the first to meet Lucille?

Buckle your seatbelts, fans. Next week, it’s going to get ugly.