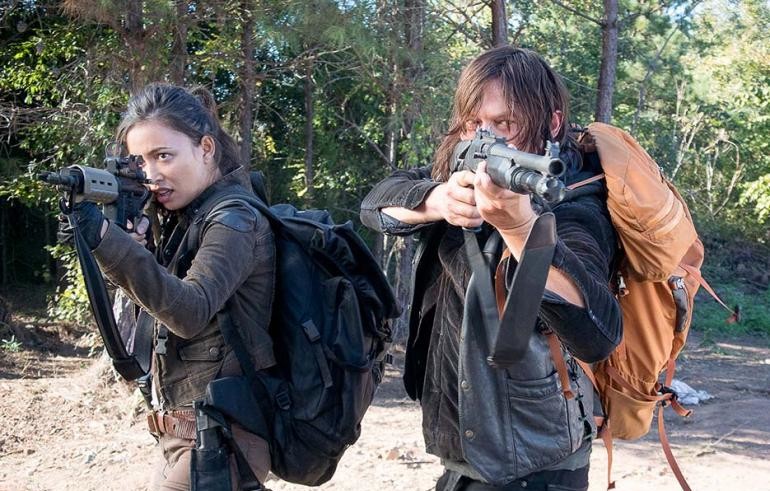 "You wanna live, you take chances. That's how it works."

Last week we followed Carol and Maggie on an adventure in kidnapping and watched as they took out their captors in rather grisly ways, including incineration. It was good fun.

This week we were dealt a slower installment, until the bitter end when Denise, Alexandria’s resident medic, met her demise at the hand of Dwight (Negan’s second in command). With just two episodes left in the season, it seems we’re much closer to Negan than we’ve ever been before, as fans of the comic will recognize Dwight sporting his signature ‘melted face’ look.

Also… Eugene totally bit Dwight’s penis. Granted, it was to create a distraction so that Rosita, Daryl, Abraham, and he could escape The Saviors’ clumsy clutches once again, but yeah, that definitely happened. A penis was chomped.

Leading up to Denise’s death, however, we spent the hour traversing through one of those classic ‘road’ episodes THE WALKING DEAD has become nefarious for employing. Need to kill some time? No problem! We’re sending some of your favorite characters on a scavenging mission. This time it was Daryl, Rosita and Denise heading off to find medicine at a nearby drug store while Abraham and Eugene visited a machine shop. 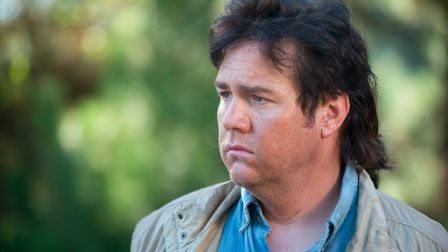 Fortunately, this often-utilized mechanic more than certainly paid off this time around. Eugene finally aims to prove his worth in a big way by revealing that, via the newly discovered machine shop, he intends to manufacture ammunition from scratch for both Alexandria and The Hilltop. This is not only a major development for the two communities and their chances of survival, but a massive win for Eugene’s character as well. Don’t get me wrong, I’m a Eugene fan through and through, but, I’m sure I’m not alone in the sentiment that his character has been in a sort of listless limbo for quite some time now. He’s finally using his intellect to take the community to the next level and is attempting to take on walkers, rather than cowering in a corner wearing a ‘Virginia Is For Lovers’ t-shirt.

I’d be remiss if I didn’t point out that there was a rather prominent ‘revenge of the nerds’ theming to “Twice As Far.” Eugene literally gets into an argument with Abraham over a missed opportunity to kill a walker, and Denise nearly gets bit doing the exact same thing. Both of these usually muted characters really set out to prove their worth in the installment, and while there is an instance of this being handled poorly (Eugene telling Abraham he doesn’t ‘need his services anymore,’ for example, came out of nowhere in my opinion) the other instance in which Denise proves her point and has her monologue moment really pays off.

Denise makes a rather poignant statement before her death: that living life means taking risks, whether you’re enduring a world where the living dead are the top of the food chain or not. She equates herself not telling Tara she loves her to not taking a risk to justify your worth or gain much needed supplies. When you really think about it, she’s sort of summarizing this season as a whole, as much of this season has revolved around taking these massive swings in order to enjoy the sanctity of the return. Merritt Wever, the actress behind Denise, portrays this moment so earnestly and with such conviction that she brings a very human performance to a show that, at times, can lack in this department. Not that the other actors aren’t turning in great performances, it’s just that even our major characters fall victim to being nuanced rather than developed. Truthfully, it’s a shame in my mind that Denise has met her end, especially when you factor in that, over the course of the hour, we were finally given a glimpse into Denise’s background. Turns out she’s an even better character than we thought, but oh well, pop goes the eyeball. Thanks Saviors!

Okay, so I need to come out with it already. Something really bothered me with this particular episode. Oddly enough, it’s not the fact that we continue to watch The Saviors fumble their attempts to take on Team Grimes. Nope, it’s Carol. Or rather, to clarify, it’s the retreading of previously slogged-through plot advancements.

The conclusion of “Twice As Far” is baffling. Carol once again decides to leave the group. Fans will recall that this exact scenario has already happened a season or two back. We’ve already seen Carol exiled from the group, only to return later and continue being a badass major character. This time Carol randomly decides she ‘can’t stand killing anymore,’ trashes her incredibly brief relationship with Tobin, and leaves. What’s next? Don’t tell me- is Glenn going to almost die again?

Look, I love this show, I love the comic, I love the universe in which both take place. I’m a fan. With that said, this is really dumb. Is this not completely contradictory to all of the eleventh-hour tough decision-making we’ve seen Carol capable of handling over the course of several seasons? Her sudden reservations against virtually everything that she’s been doing for a while now were so clearly shoved into last weeks installment that I can’t help but call bullshit on this. I understand a character breaking and needing to step aside to regroup, but that type of movement needs very strong legs to have an impact. There just simply isn’t any solid foundation for this sort of transition for Carol’s character.

Perhaps this development will have a greater impact down the line, but for now it’s flat-out frustrating. So, to end my review on a more positive note, I’ll end on my favorite quote of the episode. This one comes from Abraham, who literally has some of the best lines in this show.

“I apologize for questioning your skills. You didn’t have to bite a dick, Eugene. I sincerely mean that.”