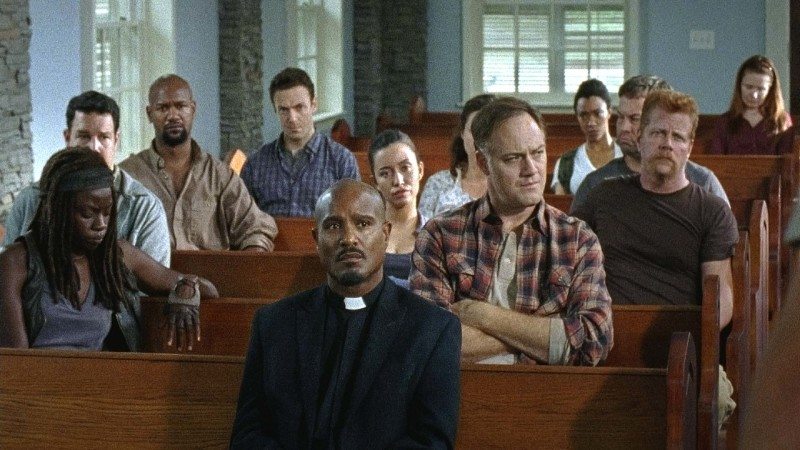 WARNING: SPOILERS ALL OVER THE PLACE!

“I’m just wondering which one of those guys was Negan…”

CLICK: Our review of last week’s episode of THE WALKING DEAD!

This week, THE WALKING DEAD puts on its ‘big boy pants’ in a particularly brutal installment, one in which Team Grimes makes the decision  to ruthlessly kill a hive of Negan’s Saviors in order to take back a hostage for The Hilltop. It’s a dog-eat-dog world in the land of THE WALKING DEAD, and opportunistic times call for opportunistic measures. 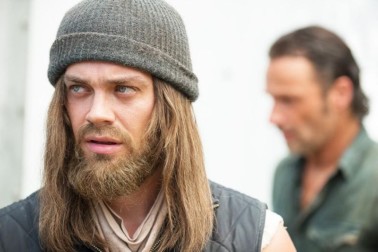 Before I get into the mercenary level of action that served as the masthead narrative for “Not Tomorrow Yet,” I’d be remiss if I didn’t touch on one of the stars of this week’s episode, and one of my favorite characters in the show, Carol.

The episode opened with a plucky rock song as Carol bakes cookies for the community of Alexandria and hand delivers their reward for enduring the savagery of week’s past. WALKING DEAD has been nailing this sort of odd, sardonic humor lately, and it’s a new element to the show I’ve personally really enjoyed. Another example of this new-found sense of humor came when this very episode saw a slow pan over to Eugene standing awkwardly in the hallway sporting a ‘Virginia is for Lovers’ t-shirt directly following Abraham’s break up with Rosita.

The show’s open this week is a perfect summation of Carol’s character as a whole. She has easily had one of the best trajectories out of any of the characters in the show to date and really is, more or less, the Walter White of THE WALKING DEAD.

She’s a formerly abused housewife who now uses that identity as her super power of blending in. She’s transformed from a meek side character into, several seasons later, being one of the show’s dependable, but caring, badasses. She’s so caring, in fact, that’s she’s baking freaking cookies for everyone!

However, what’s even better is that Carol’s bad-assery has always been delivered with legitimate purpose. Her impulses make plausible sense, even when we’ve seen her acting as a veritable stab-factory over the course of the last few seasons.

As the writers continue to stack more context and meaning around her character, such as in her moral arguments with Morgan or her new romantic interest in Tobin, her character becomes even more interesting and real. Needless to say, Melissa McBride continues to kill the role, and I’m interested in seeing how Carol handles her and Maggie being kidnapped at the climax of this week’s action-packed installment. 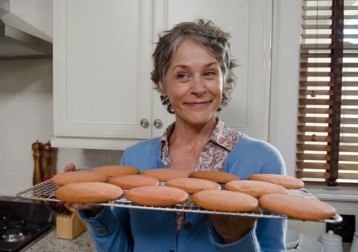 Of course. the main attraction for “Not Tomorrow Yet” was Seal Team Grimes suiting up and taking on a legion of Negan’s baddies at an armory outpost in order to get back a hostage taken from The Hilltop.
By this point in the history of the show, we as an audience know that we’re not going to be disappointed when THE WALKING DEAD aims for a high-octane action sequence like the compound shootout we witnessed in this episode. Rick & Co. moved with deadly familiarity through Negan’s cronies. However, what I really enjoyed about the bulk of the episode was that, despite the fact that watching our heroes take out waves of nameless bad guys is not uncharted territory, the act of doing so here somehow felt… dirty. Here we are, watching our protagonists brandish a level of ruthlessness we don’t usually want to associate with them, even though we’ve seen, time and time again, that the darkest avenue is often the best one to travel in THE WALKING DEAD.

READ: Want more on the villains of THE WALKING DEAD? Read our analysis on Caesar Martinez!

But in one vindicating shot Glenn looks up at a wall of Polaroids hanging in the compound, and the photos depict the bodies of victims who have clearly been beaten to death by Lucille, Negan’s signature barbed-wire-baseball-bat. The photos are absolutely mortifying, and in that one moment, we realize how magnificently evil our new villain is going to be.  Also, the fact that it was Glenn who discovered these Polaroids gives me a sneaking suspicion that Glenn will live only to fulfill his legacy from the comics by meeting Lucille face to face.

Quite frankly, those images are so bad, and Negan is so evil, that breaking into a compound and murdering men while they sleep is a totally justified course of action compared to what they’ll be dealing with once they finally meet him. The fact that our cast of survivors doesn’t quite fully grasp that yet makes for truly compelling television.

READ: For more about Negan, read our spotlight on the character!