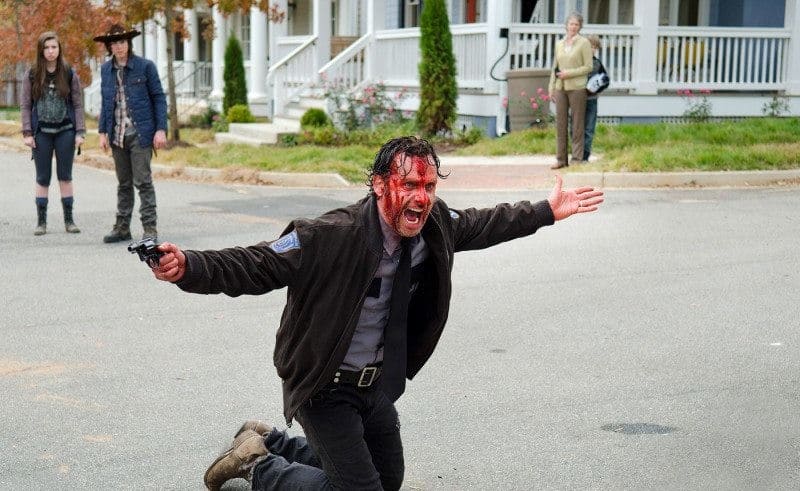 As Team Grimes continues to grapple societal strictures within the cozy walls of Alexandria, it’s obvious where this season is going. The fate of the town is going to be decided in a battle between Grimes and the Alexandrians. A substantial body count is more than likely in store for us… so, as for me? I’m predicting tears. Ample, ample tears.

With that said – one of the main caveats when dealing with a serialized show such as this is having to cross the gaps between bombs dropping. What can I say ladies and germs? This was a slower episode! Watch – I’ll sum up the show in one swift run-on sentence : Deanna is skeptical, Rick is thinking with his Richard, Sasha’s an American Sniper, the Wolves are super spooky, puberty, and Michonne has one HELL of a right hook. There! See? Quick and painless.

Try served up conflicts we’ve been touching on again and again since we arrived in Alexandria – essentially – the battle between Rick’s way of getting down, and Deanna’s. Which, understandably, might seem like a bad thing. But, honestly, for my money – considering what we’re about to take in with the season finale – riding this wave of rising action is quite fitting.

I’ve made well-clear my concerns regarding this show consuming its source material at a rate that could jeopardizes how some upcoming critical moments from the comic translate to the screen. It seems, however, at least at this point – the overall “powder keg” this season will land on revolves almost entirely around the fate of Team Grimes within the walls of the Alexandrians (or possibly, the fate of the Alexandrians within the walls of Team Grimes – BOOM – mic drop….). And I’m totally okay with that! If we don’t see Negan, his saviors, or even our next great villain with next week’s 90 minute season finale – I’m completely on board for that. Let’s iron out this huge kink in Alexandria’s ecosystem before moving on to the next massive dilemma. 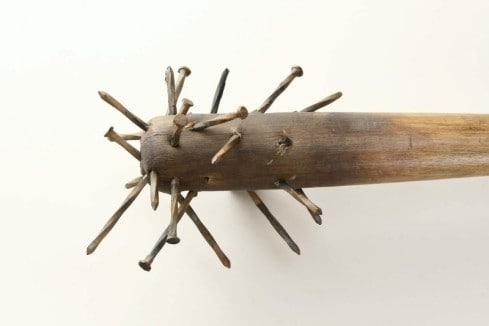 We’ve got plenty of issues to work out here, after all – first and foremost – Rick and Jessie. THAT old chestnut.

If you missed it – Rick openly threatened Pete after speaking with Carol about Sam Jessie and Pete’s son, asking for a gun to help protect Jessie. Later, Rick proposes that he deal with Pete to Jessie – and Jessie responds with what pretty much all of us are thinking – “we have to look out for ourselves”. Finally, Rick forces himself back into Jessie’s home – is discovered by Pete – and a BRUTAL fight ensues, which results in Rick having a FULL meltdown on Deanna and the Alexandrians, telling them they are simply not paying attention to the reality of their situation – and the horrifying world that awaits them just outside their wall. Ironically, in this very sequence It becomes glaringly obvious that Rick is over the edge… and can’t balance the actual civility it takes to dwell in a normal society, with the savagery it takes to survive outside of it – in a world that , too, struggles to maintain that volatile balance.

Right off the bat here – kudos to the writers. One thing I did not expect is how the romantic chemistry between Rick and Jessie – which seemed predictable – has devolved into something much more unstable. You could see that Jessie was indeed disturbed by Rick’s ‘valiance’ in this episode. It’s a really smart move on the writer’s part – as this love-triangle bit was going to get stale QUICK. This was a new and unexpected direction. Yet at the end, however, it seemed like Jessie sort of switched gears once Rick revealed that he does, in fact, have feelings for her… Needless to say, Jessie’s character is all over the place. Classic Walking Dead move with its female characters, unfortunately.

And to be frank – I’m still having quite a hard time digesting the fact that Rick has rolled into town – the first semblance of civilized life since the dead began to stink up the joint – and GUNNED for basically the first married woman that fits into his age range. It’s all just…. SO…NOT….GRIMES. He’s usually WAY more measured about how he goes into sticky situations – be they revolving around fighting the dead or fighting the heart.

The only way I can make sense of Rick’s mental state at this point – is that Rick is bored. For the first time in years, he can casually place his hand on a steel wall – a walker mere feet away – and think “I don’t need to do a goddamn thing right now”. No biting people’s Necks, bloodying his fists on an eye patch or yelling “CORAL” with the ferocity of 1,000 dragons. I honestly think he’s just looking to fill a void. The void for normalcy, the void for being a leader and protecting people, …the void for Laurie – and at the same time – the void that usually has a threat residing in it.

Thankfully – Michonne puts a pin in this entire situation until next week by opening up a straight up haymaker to the back of Rick’s head… putting him down for a much needed nap.

“Like I said, one HELL of a right hook…”

The rest of the episode, outside of Rick and Jessie’s love-shack, was a tad inconsequential ! Sasha has major PTSD and a killer shot. Carl and his prospective new gal play “7 Minutes in Heaven With Zombies” and discuss life’s meaning within all the mayhem. Even Glenn’s interaction with Nicholas after last week’s slaughter (that fucking coward) and the reveal that Nicholas is actually the person who purloined Rick’s blender-gun (not good… not good, indeed) was a bit lackluster.

I would say the second biggest bang of “Try” would be Daryl and Aaron’s grizzly discovery of an apparent kidnapping victim, left for walkers, donning the cryptic “W” on her forehead. What the hell does this W thing mean!? I really hope we get some closure on that next week, I’m drowning in speculation (are they the Wolves? Is this an exiled Alexandrian who went mad and is committing these atrocities? Is Morgan dyslexic and carving upside-down M’s into walkers? WHAT’S UP!?)

With the upcoming conclusion of the 5th season of The Walking Dead – the lines between who our villains and desperate good guys are seem to be blurring ad nauseam. We’re not entirely sure if Team Grimes is poised for civilized life, if they’re causing more harm than good, and if they’re galvanizing or destroying the seeming miracle that is Alexandria…

What I love about all this is that – these conflicts mean more than just the mere stakes of losing cast members, or having to force our heroes out onto the road again. They push at the boundaries of who our heroes have turned into – and how that is going to directly effect the survival of those around them.

For what it’s worth – I feel that makes for a really interesting dynamic. A dynamic, at least, that we’re not accustomed to. It’s the season finale next week… let’s get weird, Walking Dead.