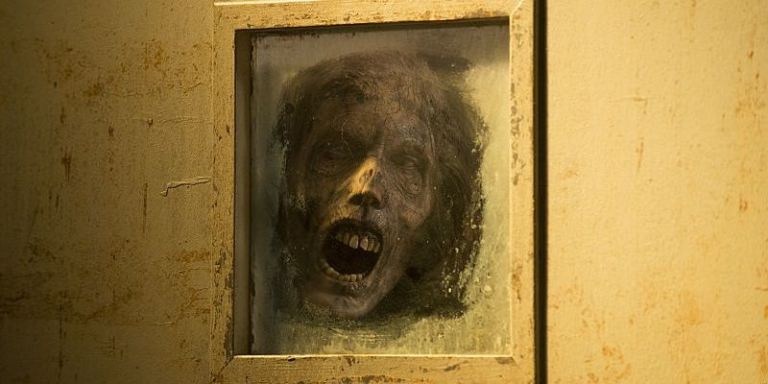 CLICK: Our review of last week’s THE WALKING DEAD!

Last week we were treated to an action-packed hour of THE WALKING DEAD in which Grimes & Company descended on Negan’s armory. The climax of which resulted in Carol and Maggie getting kidnapped by some henchmen (or should I say, Neganites?).

This week’s installment, titled “The Same Boat,” picks up right where we left off. Yet, this addition is a heavy contrast to the previous and is very much a bottle episode in my mind. It’s Carol and Maggie being held captive all while empty threats are being made by Negan’s crew.  The two play the long con until they can either escape or be rescued by Rick. They eventually get the upper hand and “cap some fools.” That’s uh… that’s it!

In all seriousness, “The Same Boat” is sincerely a much slower burn compared to the rest of the season as a whole. This isn’t necessarily a bad thing, despite the long slog of baddie origin exposition that occurs prior to the climax of the installment, when the narrative really comes to a worthy focal point. You have to hand it to the writers in the very least, as this certainly wasn’t your typical black-and-white conflict of “characters we love VS characters we hate.” There was, after all, an incredibly deep point to be made in the episode.

The point made is this: the lines of when to kill, who to kill, and why to kill are slowly getting blurred in the world of THE WALKING DEAD. As the overarching narrative evolves, we’re seeing these nuances of civility popping up where they may not have even been possible before. For example, we’ve recently seen Morgan constructing Alexandria’s first jail cell. This is a huge development, the insinuation that our survivors are going to start locking up bad guys rather than, like usual, just killing them. Simultaneously, we have our heroes wondering more than ever whether or not they’re just as bad as all the villains they keep slaying, so their moralistic arguments are blurring the lines even further. For a perfect paradigm of such a moralistic argument look no further, this week, than Carol.

Make no mistake about it: this is an episode where Carol (actress Melissa McBride) truly shines. Carol has become a fan favorite and, over the course of the past few seasons, a veritable killing machine. As the installment moves along, it seems everything is business as usual; Carol fakes a panic attack to put herself in a more strategic position to escape, Maggie finds a common ground with her captor in order to do the same. Eventually, they do just that. Carol kills a bunch of baddies in fairly grisly ways. It’s all somewhat predictable.

But what really stands out to me once Carol and Maggie take control of their unexpected hostage situation is that we learn what all this killing is really doing to Carol inside. It’s costing her a great deal morally and emotionally, and there is legitimate anguish in her eyes as she attempts to recount exactly how many living people she’s  killed, saying “I think it’s something like 18…” in this sort of glazed-over-regretful tone.

“The Same Boat” was such a brilliantly portrayed episode by Melissa McBride, I just really have to give her some props here. After all, these moral arguments are very familiar terrain. We’re not strangers to the assertions of what kind of monsters our heroes must become to battle the other, bigger monsters. But Carol’s addition to this coda and how much she struggles with it, how much depth she brings to this dilemma, makes treading these waters again very worth it.

The episode concludes with a good old fashioned “someone getting shot in the head” as Rick takes out Primo, one of Negan’s numerous faceless assistants. We need to take into account the fact that all these henchpeople (who claim “they’re all Negan”) have been blown up, shot, stabbed in their sleep and incinerated by this point. Yet, there’s seemingly no sign of the man himself, nor do there seem to be any consequences for ripping through his cohorts like a field of corn to be shucked.

That cannot be good. Once Negan finally does arrive, I have a sinking feeling he is going to have a whole lot to say and terrifyingly do about all this. With three episodes left, I must admit I’m dreading his arrival.

But for now, the man remains a mystery.

READ: For more about Negan, read our spotlight on the character!