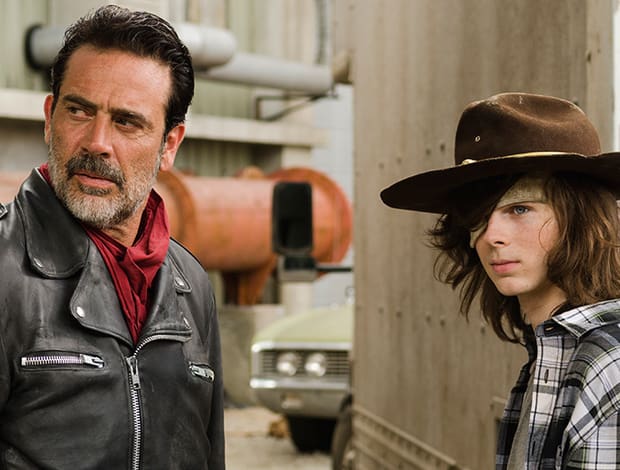 After a drop in ratings and scathing critical reviews, expectations are at an all-time low for THE WALKING DEAD. But this Sunday’s episode, titled “Sing Me a Song”, was a breath of fresh air for this season and a sharp turn in the right direction for the show. Negan’s character was interesting for the first time since the premiere, and we finally had a chance to see what Negan is like when he’s not intimidating our favorite characters. Despite some painfully bad line delivery from Carl, this episode was filled with fan service, well paced, and hopefully the first of many improved episodes this season.

After Carl sneaks into the Saviors’ base, he sees what Negan’s life is like and the way he functions as a leader. Meanwhile, the rest of the cast are preparing for Negan’s return in their own unique ways. Rather than devoting this episode to only one storyline like previous episodes, “Sing Me a Song” followed 7 different plots, one of which focused on Carl and Negan. By bouncing around from story to story, the pacing of the episode never felt stagnant. As a result, the episode delivered only scenes that were necessary, and without useless or boring filler. This was a refreshing shift from previous episodes, which only featured one or two group of characters. 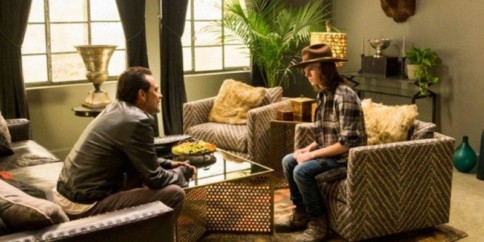 Interestingly enough, the worst and best parts of this episode were the same thing: Carl. Negan’s time with Carl in the graphic novel are a favorite among fans, whom were waiting with anticipation for this episode. The episode was able to deliver, and met expectations for the most part. Many lines of dialogue were taken from the graphic novel verbatim. Unfortunately, Chandler Riggs’ (Carl) acting ability couldn’t keep up with Jeffrey Dean Morgan (Negan), and his sub-par acting abilities were apparent. It was hard not to cringe when Carl asked to see Negan, and again when Carl asked Negan to jump out of a window. No matter how hard he tries, Chandler simply can’t pull off intimidating. After shooting just two men, Carl asked where Negan was. This was disappointing to many fans, since Carl kills a lot more Saviors in the graphic novel, and continues his rampage until he’s finally subdued. This speechless massacre spoke volumes to Carl’s personality, and was absent in this episode. Instead, we were treated to a Carl that was merely threatening the Saviors with a gun asking to see Negan, and didn’t even shoot at him. This is not the same Carl. 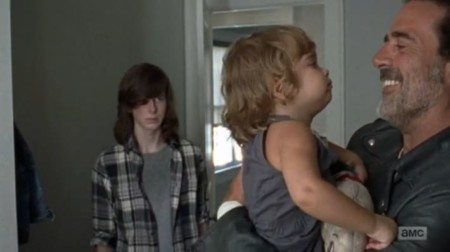 This episode successfully pulled off comedy in a way that matched the show’s dark and gritty tone. Towards the end of the episode, Negan returns to Alexandria and offers to have sex with Olivia after insulting her with a fat joke. After a swift slap in the face, Negan leaned closer to Olivia, revealing that this all but turned him off. This scene was followed by a montage of sorts, as Negan takes off his shoes and makes himself at home in Rick’s house. While this event initially seemed insignificant, this was an opportunity for us to see Negan’s goofy side, and helped us learn that Negan is more than just a bully. Seeing more than one side of a character is a treat in a show like this.

READ: How bad was the last episode of THE WALKING DEAD? Find out here!

Despite the improvements, THE WALKING DEAD will need to continue to step up its game if it wants fans to consider this season a success. “Sing Me a Song” reminded us of what we like about the show, but also reminded us of its flaws. Chandler Riggs has added himself to the list of cast members that can’t seem to carry an episode, and the fan service seems to stop short at copy pasting lines from the graphic novel. Despite this, “Sing Me a Song” is a step in the right direction for this season, and we can hope the next episode continues down this path.