After announcing Brian K. Vaughan would be the first person besides series creator Robert Kirkman to pen a comic in the universe of THE WALKING DEAD for Panel Syndicate — a platform for creators to distribute DRM-free comics digitally at a pay-what-you-want cost — we hadn’t heard a thing about the project. That is, until today, when THE WALKING DEAD: THE ALIEN released without warning.

In ALIEN, Vaughan — along with his PRIVATE EYE collaborator Marcos Martin — tells the story of Jeff, an American trapped in Spain during the onset of the outbreak. We learn Jeff is a post-college wanderer who worked odd construction jobs to save up enough to facilitate a life of wandering, and chose Spain because of his love of Orwell’s HOMAGE TO CATALINA. He had only been in Spain a few days when he got news his brother had been hospitalized, but by the time he got to the airport he was trapped in the country due to quarantines. After being saved by Claudia, a museum curator at the Museo Militar (which is taken advantage of in a few really cool ways that I won’t spoil here), Jeff is enlisted in her mission to escape the infected streets of Barcelona to the US in search of a rumored cure for the people of Spain.

LISTEN: All caught up on THE WALKING DEAD? Check out our podcast on the last 50 issue of the comic!

The story is most notable for being our first look at the world of THE WALKING DEAD outside of the United States to see how people overseas are dealing with the apocalypse. Unfortunately, due to the issue’s self-contained nature, we don’t get to meet any Spanish survivors other than Claudia, nor do we learn much about how the country or region is faring overall. Our characters feel similarly cramped in this one-shot story and some of Jeff’s dialogue in particular ventures into info dumping a bit in an attempt to flesh out his character and answer questions for the reader. Claudia is a little to “exotic, sexy stranger” for my taste and doesn’t have time to do much but help move us to the next story beat. Generally speaking though, the dialogue and the characters themselves felt authentic enough to carry us through to the story’s true purpose. Upon reading the issue a second time, ALIEN feels like it’s in a rush to get to the (admittedly shocking) reveal we never knew was coming. Thankfully, the payoff is strong enough and the base premise is so engaging that the story earns itself a place in the WALKING DEAD cannon. 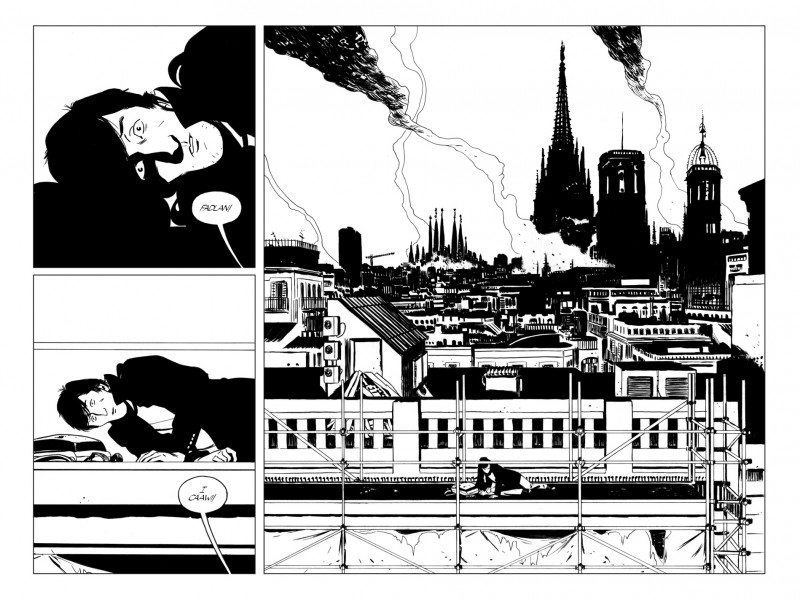 Given the fact that I’m such a big fan of Vaughan, I’m surprised to say that Martin’s art is easily the most memorable aspect of ALIEN. His work on this issue feels right at home in the universe of THE WALKING DEAD and his style makes characters feel incredibly life-like. They have unique and well-defined facial features like the bump in Jeff’s nose or the bags under Claudia’s eyes. The comic is in total B&W a la WD proper, excluding one brief use of color that I won’t spoil here.

Though the art itself is gorgeous, the unique thing about the issue was its panel layout. The comic is presented in 32 half-size pages that makes page layouts and pacing much different than your typical comic. The story covers a lot of ground and moves at such a brisk pace that the style is a natural fit. So much so that I didn’t realize the change until I was 11 pages in. I love seeing Martin take advantage of the digital medium to play with traditional layouts. It’s incredible how vast some of the scenes still feel despite being cramped on ¼ of a normal comic page. Panels are cut and chopped in unique ways, and smaller panels are used to show movement in fresh ways. Simply put, it’s astounding how much is fit comfortably on these 32 pages.

In a time where there are countless ancillary WALKING DEAD experiences of varying degrees of quality, ALIEN is welcome addition to the ever expanding universe of THE WALKING DEAD. It’s a real shame ALIEN wasn’t a bit lengthier, or even given a miniseries, because it’s an overall air of missed opportunity that keeps ALIEN from being truly great.