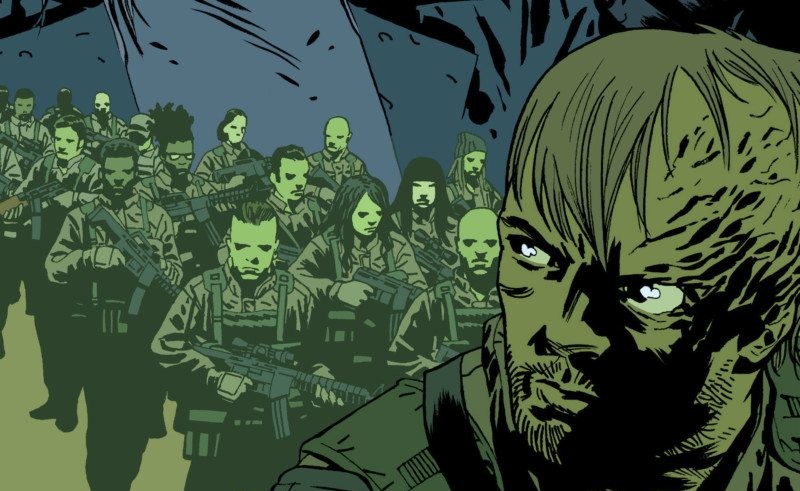 If THE WALKING DEAD has shown us anything, it’s that things often get worse before they get better. That’s not the case in this issue. Dwight and company actually do a great job keeping their heads on straight while destroying those of zombies and Whisperers alike. Things don’t go exactly as planned—many of the Whisperers retreat and regroup among the undead—but it could have gone a lot worse. The plot’s stakes feel low despite the overwhelming odds the characters face. While the plot feels a little unexciting because, admit it, we were all hoping things would go terribly wrong for our heroes, moments of characterization in this issue redeem it.

READ: Need to get caught up? Check out our review of issue #158!

The most striking moment in this issue is when Negan takes up Lucille once again to attack Beta.  This time, we’re rooting for him as he swings his mighty weapon. It’s a strange feeling—it was a rush to see such an iconic moment again, but there was also the haunting memory of what this weapon was capable of doing to Glenn. It felt weird to root for Beta to share Glenn’s fate, but I couldn’t help it.

Sadly, Lucille doesn’t survive the attack, and Beta does. Negan is heartbroken that his weapon has literally cracked under pressure and goes into a berserker rage, demanding that Beta pay for it with his life. But Beta and the Whisperers slip away into the forest to leave Negan, Dwight, Michonne, Jesus, and their troops to deal with the rest of the zombie horde. Miraculously, there are few casualties.

But in typical WALKING DEAD fashion, our heroes don’t have long to celebrate this victory before they’re confronted with an even larger horde. Thinking quickly, Dwight assigns his troops to divide and conquer this threat. I love this side of Dwight. He lived in Negan’s shadow for so long and is now holding his own as a leader. He was able to keep his fighters level-headed when facing a tremendous threat—something the Dwight we first met wouldn’t have been able to do.

READ: Want to learn more about Dwight? Check out our spotlight on him in our WALKING DEAD villains series!

There’s also a great moment on the Whisperer side. I love learning more about their culture. We get to see a lot of that in this issue. We see it from Beta firsthand. Two Whisperers are tending to Beta after he’s dazed from his fight with Negan. Turns out, no one has ever seen Beta’s face. And that won’t be changing anytime soon. 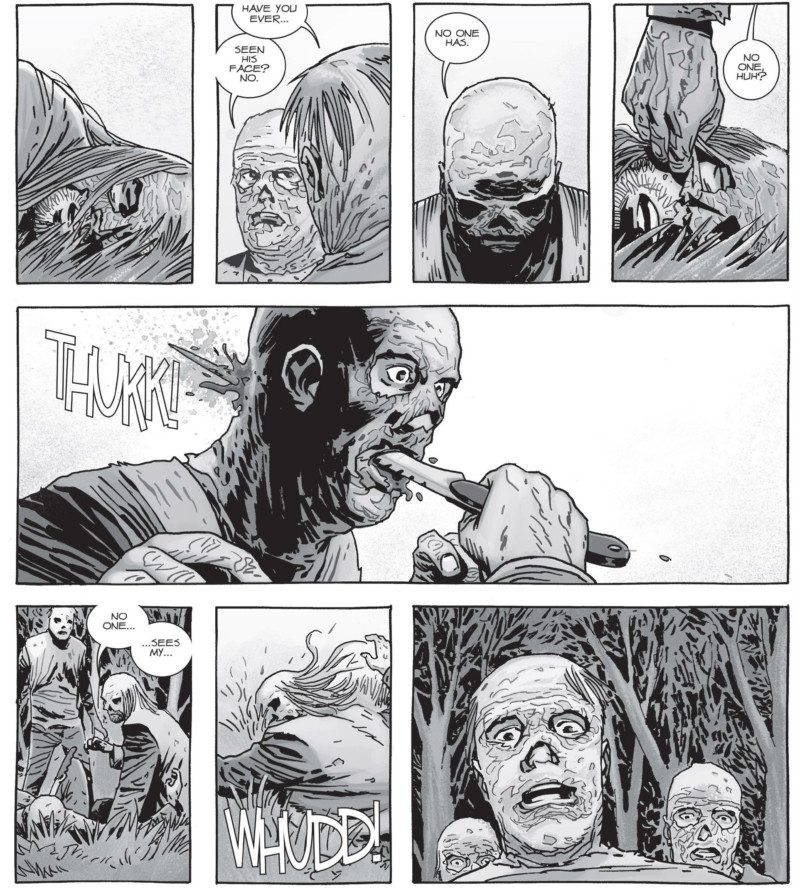 We also get a horrifying secondhand account of the Whisperers from Lily. According to her, the Whisperers are little better than the dead. “These people have no sense of self, no purpose other than to exist, no hesitation, no hesitation to kill or die for my mother. They’re not living. So they have nothing to lose.”

Right there. That’s why the Whisperers are so terrifying. It’s not just that they can hide in plain sight of the post-zombie apocalypse, but it also verges on the uncanny valley side of things. They’re human and yet not.

READ: Want to know where this all started? Check out our review of part one of the Whisperer War!

Artistically this issue excelled because of its memory of Glenn’s murder. Many of these panels felt so familiar—because we have seen them before. Only this time, Negan isn’t smiling as he takes swings with Lucille. Well, not exactly. There is the slightest hint of a smile as he begins his strikes. 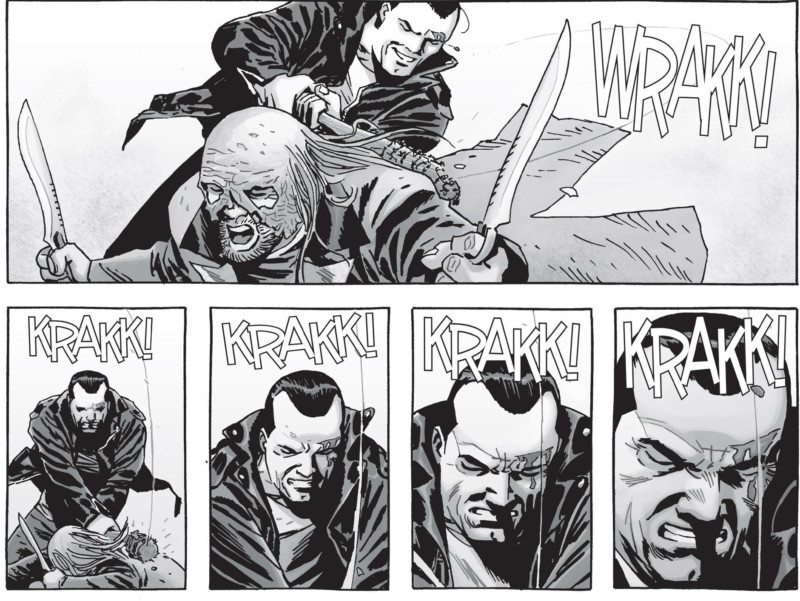 Probably one of the most intense panel sequences I’ve seen in a while. This, along with the characterization in this issue, was able to redeem a somewhat unsatisfying plot. I’m really excited to see where it goes next. Dwight and his soldiers all don zombie skins, and are taking the fight to the Whisperers. It’s going to be a bloodbath; I can’t wait.