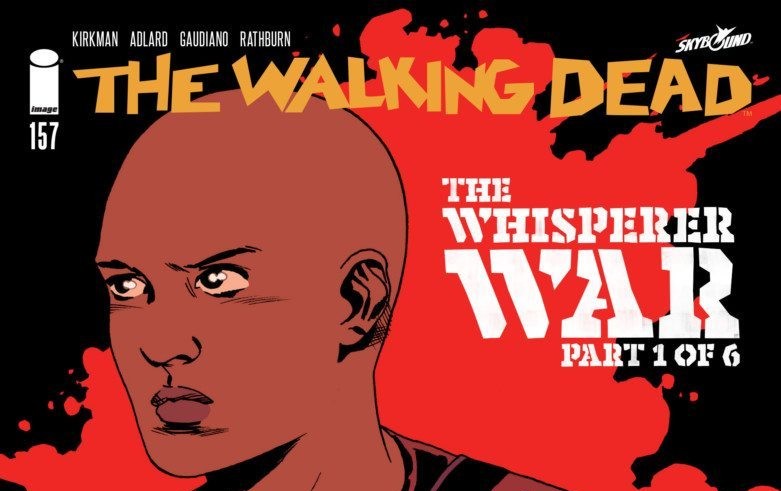 With the explosive events of last month’s issue, it was only a matter of time before both sides started gearing up for war with each other. I’ve been reading THE WALKING DEAD since the beginning and I’ve seen calm before the storm plenty of times. This issue reminded me why I love it so much.

Starting right from the cover readers are introduced to one of THE WALKING DEAD’s strongest storytelling assets–pacing. It’s billed as “The Whisperer War, Part One of Six.” This major conflict has been brewing since the Whisperers first reared their undead skin-covered heads way back in issue 130. Knowing that this was part one of six really helped me, as a reader, in terms of creating expectations. I knew that they wouldn’t just jump right into war after the events of last issue, and that’s what makes this comic so great.

READ: Need to get caught up? Check out our review of THE WALKING DEAD issue 156!

This issue is no exception. We see all of the characters planning for the incoming Whisperer attack. Rick relays his battle plan to Dwight and sends word to other communities for help, where we catch glimpses of their situations. Back at the Hilltop, Carl and Lydia beg to join up with Michonne, who tells them that they are needed most at the Hilltop. Ezekiel’s kingdom is left barely functioning with William and Zachary, taking over following Ezekiel’s demise. The two debate whether or not to send their best men and horses in while in such dire straights. Meanwhile, Eugene continues his radio conversation with the mysterious survivor. This scene provides some much-needed humor. 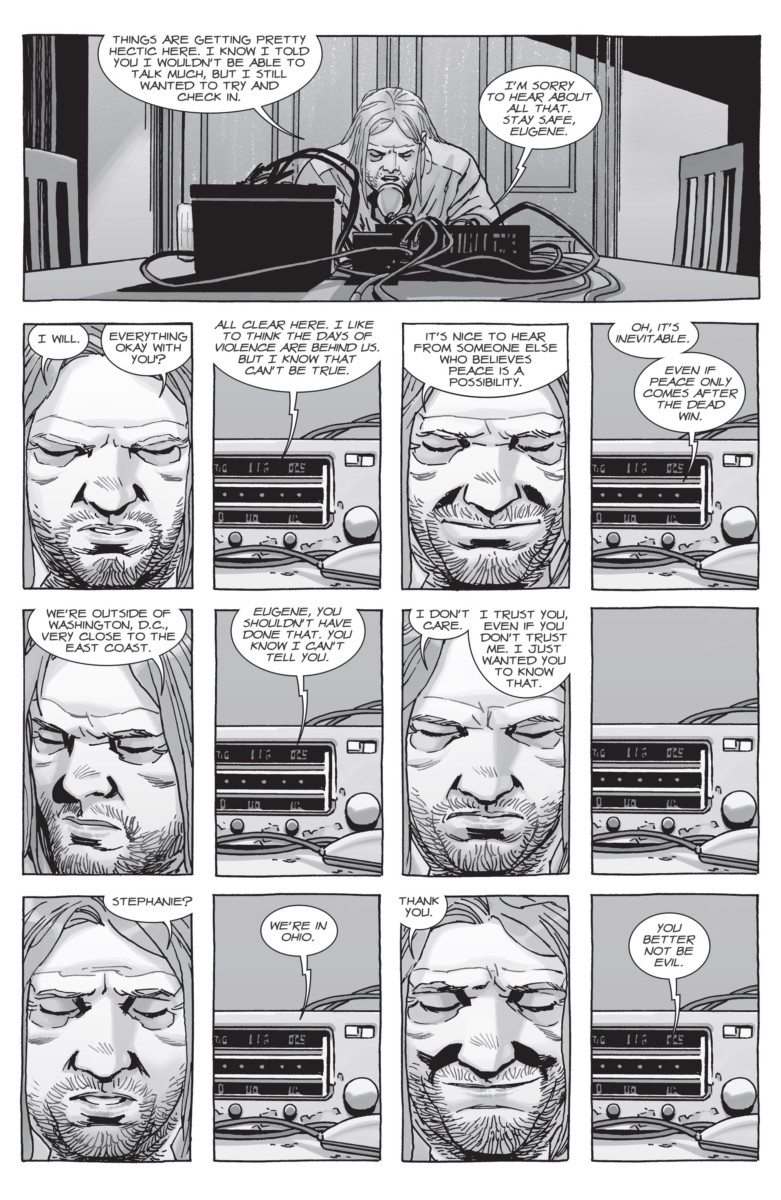 I love the pre-conflict issues. They create tension as we wait for a fresh new horror to arrive. Emotionally, this is great for the reader because it appeals to our darker nature. We all secretly want to see what happens when the dead or worse come after our favorite characters. It connects to the running theme in the book of inner monstrosity.

Even though we’ve seen this type of tension-building storytelling before, the characters take on different roles. Rick has become too important, and as Andrea bluntly points out, too old to be on the front lines any longer. His new duty, as he sees it, is to direct his major plans for the battle but ultimately leave all decisions in the field to his most trusted lieutenants, like Dwight and Magna. We’ve seen the years catch up with Rick as Alexandria became more stable, but this is the first time he’s taken on such a radically different role in a conflict. This Rick is unrecognizable compared to the one Negan attacked earlier in the series.

READ: Love the villains of THE WALKING DEAD? Check out our analysis of Ron from the TV show!

Speaking of Negan, he’s gone through some major character development as well. He has truly proven himself to be an asset in Rick’s community given his knowledge of all things Whisperer. That said, Rick still does not trust him. They come up with a deal that shows Rick still harbors a lot of distrust for Negan, despite his useful knowledge. 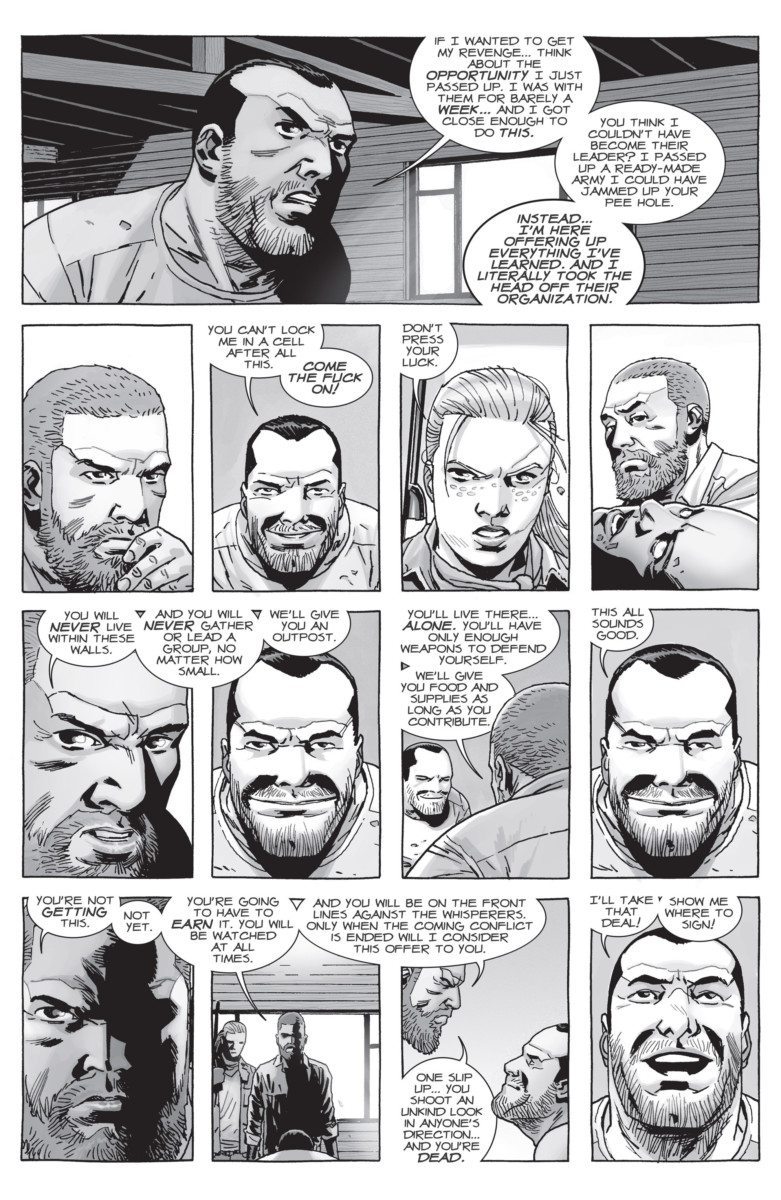 This issue also went to new places artistically through the use of twelve- and sixteen-panel grids. When I first saw this I was worried that they were trying cram in as much art as they could. However, this ended up being a major strength of the issue and never seen before. Charlie Adlard outdid himself on this one. Each panel has so much detail to offer without overwhelming the reader. It helps convey how many communities are affected by the impending Whisperers attack, which raises the stakes and increases the tension. 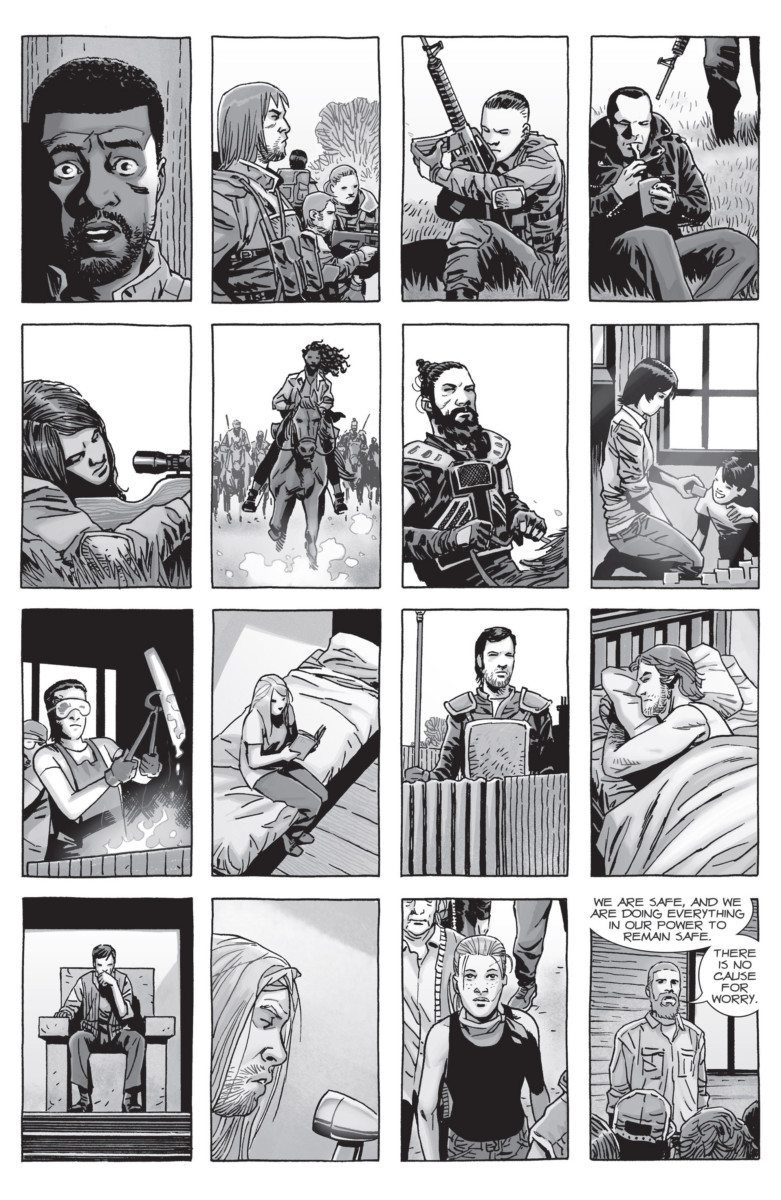 This was a great start to this new six-part arc and I can’t wait to see where it goes. Knowing THE WALKING DEAD, all these plans in place will unravel rapidly and descend into chaos. Does it scare me that I’m rooting for this? A little. But that’s what makes it so much fun to read.