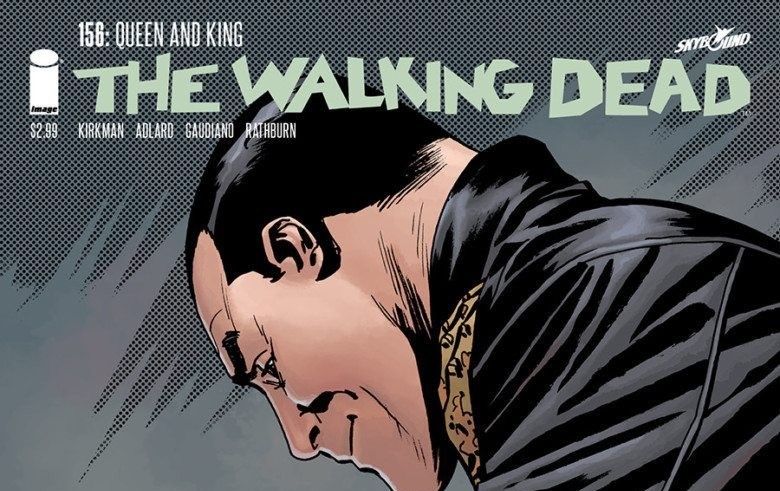 Negan has been one of the most notorious characters in THE WALKING DEAD’s history. He instantly made his mark in readers’ minds with his brutal execution of Glen by a barbed wire covered baseball bat in issue #100. This issue of THE WALKING DEAD has perhaps the biggest Negan moment so far, when he slits Alpha’s throat and reveals his plan to bring her head back to Rick. More on that later, but the last few pages of this book were heart pounding, to say the least.

Everything else, however, seemed to be a mad dash to arrive at this game-changing conclusion. One of THE WALKING DEAD’s major strengths has always been its ability to keep readers on the edge of their seats through the use of suspense and delayed gratification by switching to other plot lines. Those are classic horror tactics, and they’re classics for a reason–they work. The reward for the reader is not always seeing the horror in the comic but more often earning a satisfying conclusion to the characters’ stories. Had this issue utilized this tactic, there could have been some compelling plot elements, but instead, it came off as rushed.

READ: Need to get caught up? Read our review of last month’s issue here!

In this issue, we see Negan living life amongst the Whisperers and having to earn his keep. He is ostracized by them and struggles to prove himself, which he eventually does by killing a boar on a hunt. This earns him a knife, which he uses to kill two zombies. I loved these scenes because of the stark contrast between Negan’s brash vulgarity-imbued humor and the grim, serious attitude the Whisperers have adopted. My one problem was that I had no sense of the timeline of these events. The arc of Negan starting a life with the Whisperers and their acceptance of him happen all in this one issue. In rushing these plot points, I believe the story missed an opportunity to explore the reasons why Negan has so much admiration for the Whisperers and to learn more about this strange and deadly new faction in the world of THE WALKING DEAD. Additionally, I felt there was some romantic subtext to all of Alpha and Negan’s interactions that I would’ve liked to explore more. They’re cute in a “they’d look so good murdering people together” kind of way. Anyway, I dig it, and I wouldn’t have ended it so soon. 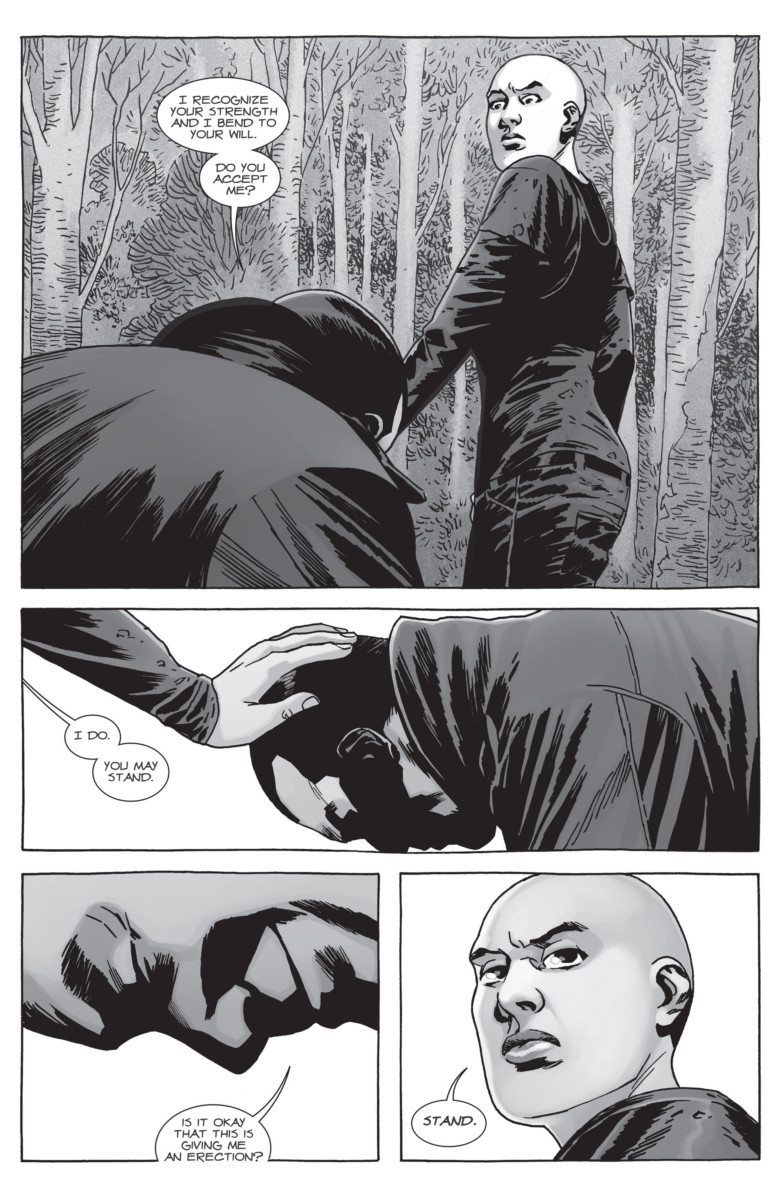 Even though it could have been done better, the character development in this issue was still pretty good. Alpha justifies the rapes that occur in the Whisperers camp by saying that only the strong survive. Negan points out that society is built to ensure the protection of the weak and justice for the wronged, but these ideas don’t exist in Whisperer culture because these people are trying to live like animals in nature. Despite her apathetic façade, Alpha does break down when she admits her regret at letting some Whisperers rape her young daughter because of this philosophy. It’s a fascinating discussion of human nature, and one of the reasons why I love THE WALKING DEAD. Here you have a horror comic about the zombie apocalypse while also getting some of the best commentaries on these philosophical topics. I invite anyone who thinks comics are “low art” to read this book. 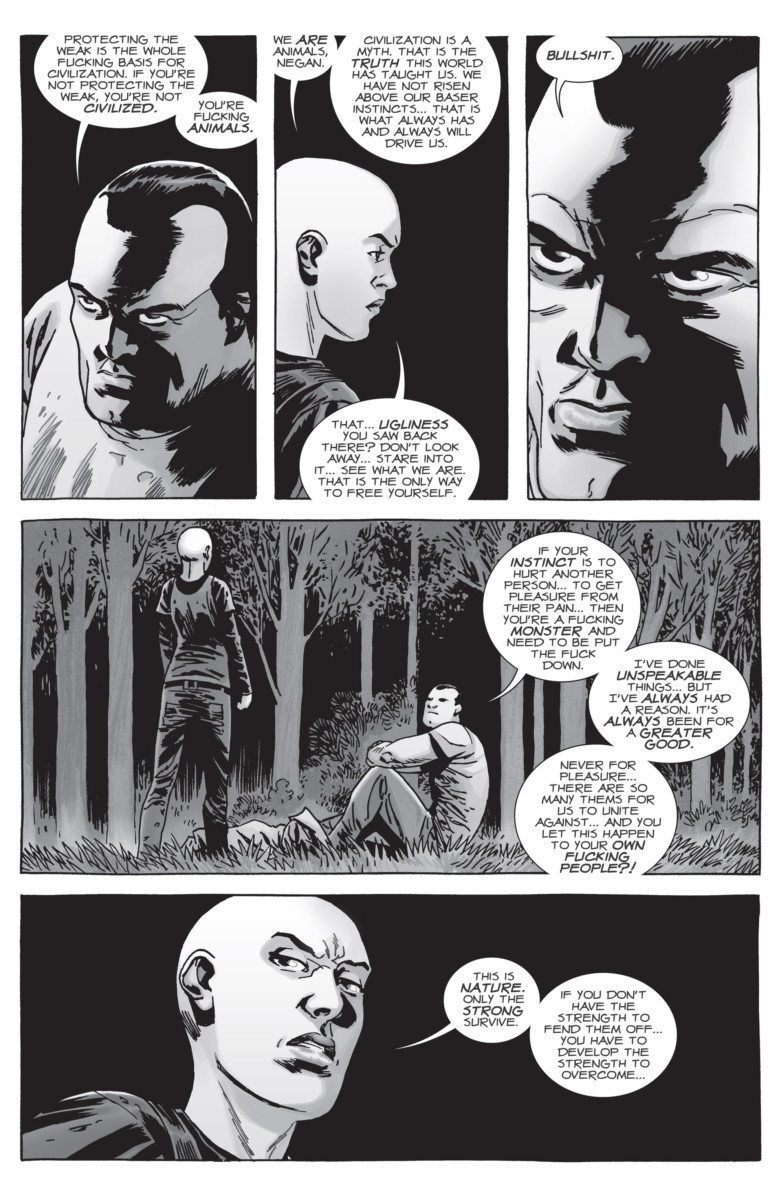 Speaking of art, this issue upholds THE WALKING DEAD’s artistic merit. It’s all well drawn, and the black and white adds a lot of character to each panel, particularly in intense scenes where the background is blacked out and in full-page spreads that give you those classic “Oh shit” moments the horror genre is known for. That said, the plot and characterization are still the main reason I pick up this book every month. Not to say that the art is weak, but it’s not the reason I keep coming back.

READ: Love Negan? Check out our character analysis of him in our WALKING DEAD villains series!

Even if this issue was rushed and missed some opportunities for further character development, I still love it because of how powerful the ending is. Negan killing Alpha for Rick is bound to shake things up, and I can’t wait to see where it goes next month.