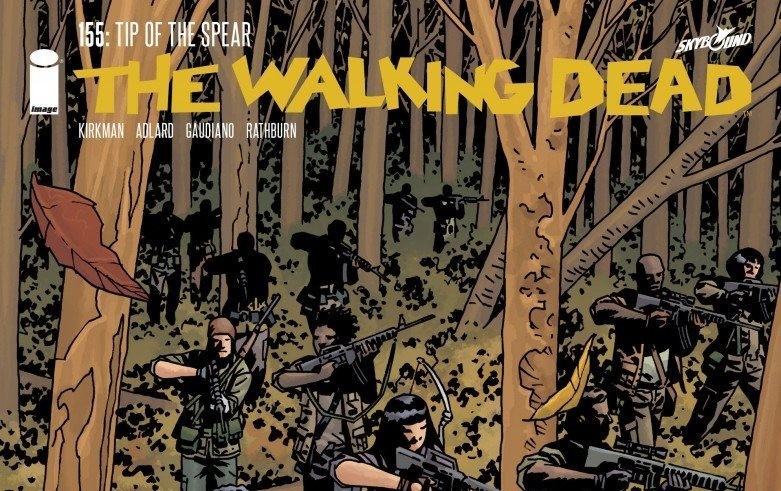 THE WALKING DEAD is one of the best examples of comic storytelling in recent memory. I can’t put it down. It handles many characters and plots all at once and does a great job of giving them all appropriate attention. This leads to a well-layered, compelling story. Issue #155 is the perfect example of how Robert Kirkman and friends can move along several plots at once while giving depth to the events and characters.

There is a lot going on in this issue, and it’s all thrilling in its own way. Michonne is defending an injured Aaron from the threat of Whisperers and zombies alike. She manages to defend him long enough for Dwight’s company of soldiers to arrive, giving her the opportunity to take Aaron back to town to treat his injuries. Dwight and his soldiers then track the rest of the Whisperers into their territory. Meanwhile, Negan, now escaped from prison, is talking with Alpha of the Whisperers to launch an assault on Rick’s people. These plot elements create a sense of urgency and danger while providing some great action and dialogue which makes the book really entertaining.

READ: Need catching up? Check out our review of THE WALKING DEAD #154!

This issue also expands on some political and moral problems facing Rick. Back at Alexandria, Rick is coming to terms with the fact that he’s been manipulating his people by redirecting their anger towards him to the Whisperers. I loved this because it shows that the problems affecting these characters aren’t always about things that are trying to kill them. I found it a refreshing source of conflict and a sign of great development in the reconstruction-of-civilization story and the series as a whole. THE WALKING DEAD has always been a series about surviving the zombie apocalypse, and we’re finally getting into how organized government and society itself are reborn in the wake of these events. Zombies are a conquerable threat at this point, and most of the drama has arisen from the threat of other people in recent issues. Now, we realize that Rick’s leadership could be a new danger to face. 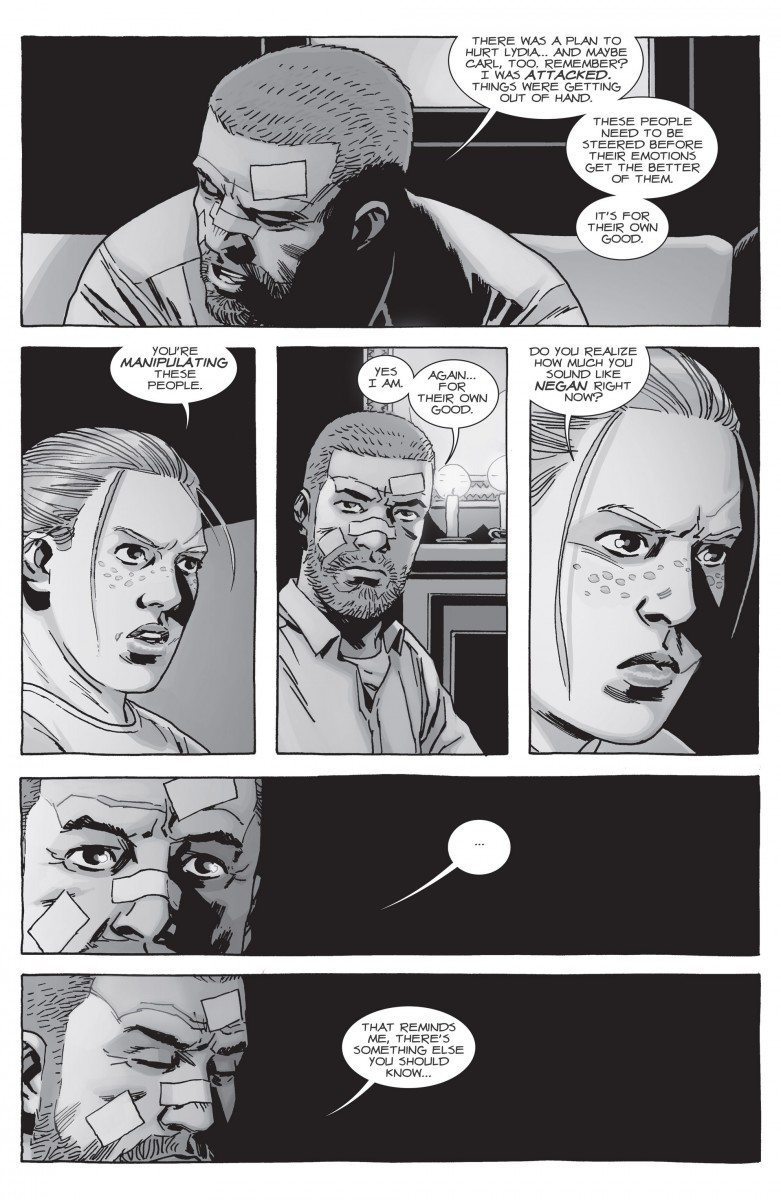 This issue also excels in terms of characterization. We see Rick accepting the burden of how he’s been leading his people, and he’s clearly not okay with how his decisions have aligned with what Negan told him to do. He’s coming to terms with the fact that Negan gave some good advice and is clearly worried he could end up being a murderous maniac like Negan. This is a big moment because Rick has always tried to do what’s best as a leader, and manipulating his people is clearly something he’s not proud of. He justifies this to himself and to Andrea by saying it’s for their own good, but we’re clearly meant to observe his uncertainty. We saw someone get shot a few issues ago because someone else mistook them for a Whisperer. Regardless of what you think, political and moral conflicts such as this one are what make THE WALKING DEAD truly unique. Beyond that, we see some great fighting action with Michonne being her usual badass single-handedly fighting off zombies and Whisperers while managing to get Aaron back to Alexandria.

READ: Love the villains of THE WALKING DEAD? Read our analysis of Ron!

We also see a rare moment of fear from Negan. This adds a level of depth to his character. We haven’t seen him admit to fearing anything, and when he does so, he says it as only Negan can. (See below.) 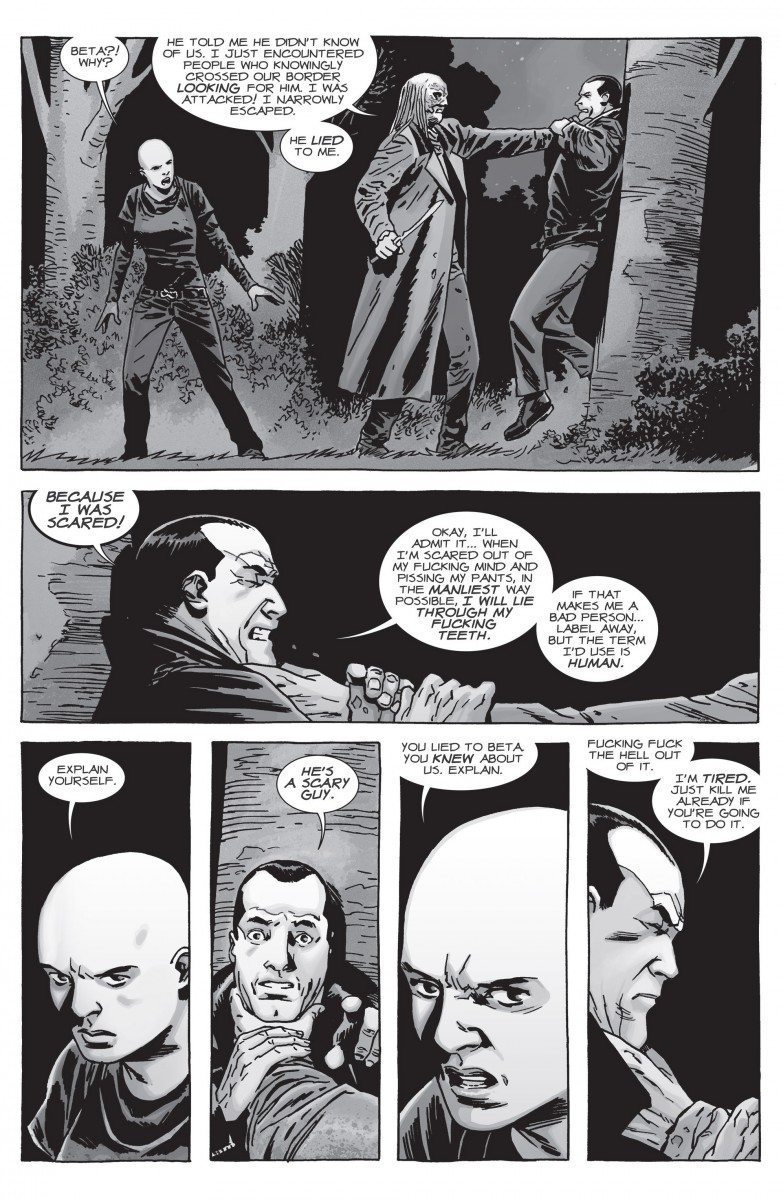 Artistically this issue continues to uphold the high standards of THE WALKING DEAD. The artistic team uses lighter shades brilliantly to illustrate less intense situations, such as Rick and Andrea discussing his manipulation in his leadership. On the other hand, intense action scenes are drawn in heavy, deep inks that reflect the gravity and desperation of the situation. 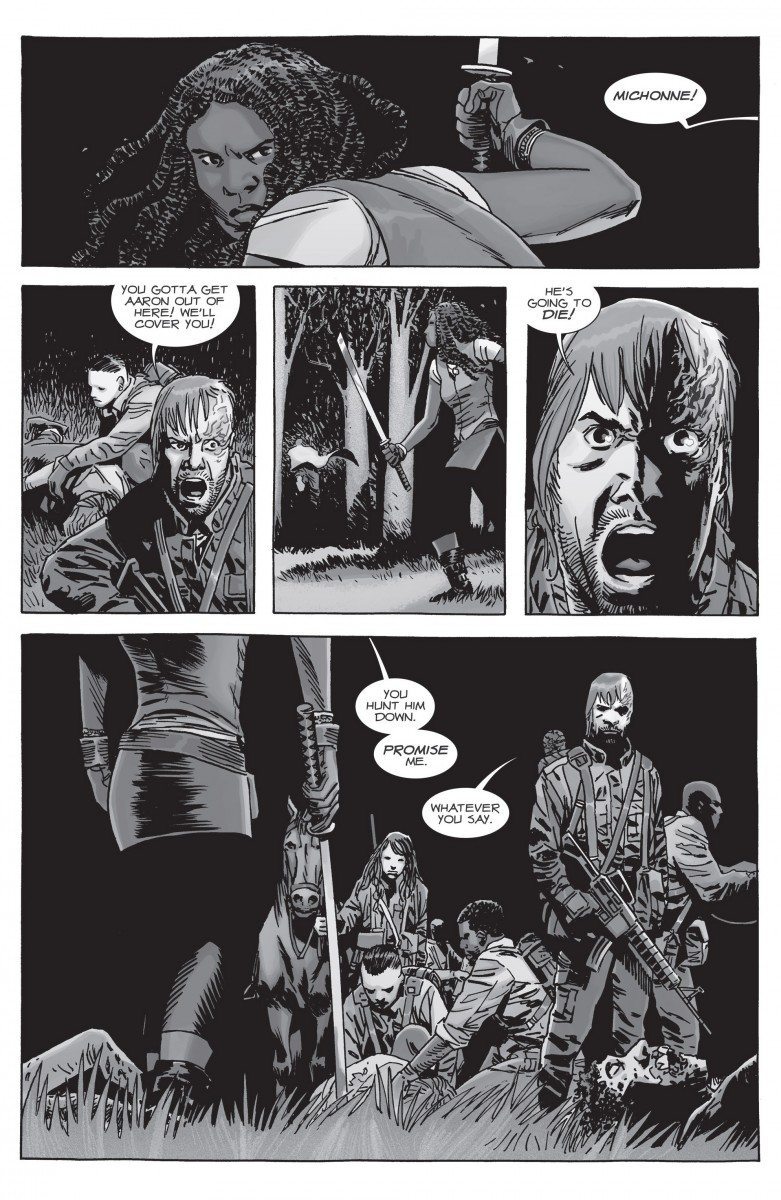 At first glance, all the plots intertwined in this issue of THE WALKING DEAD seem like Kirkman has bitten off more than he can chew. Quite the opposite. These plotlines all make the issue more exciting while setting up for the future of the series. I’m excited to see all of these plots play out in future issues.