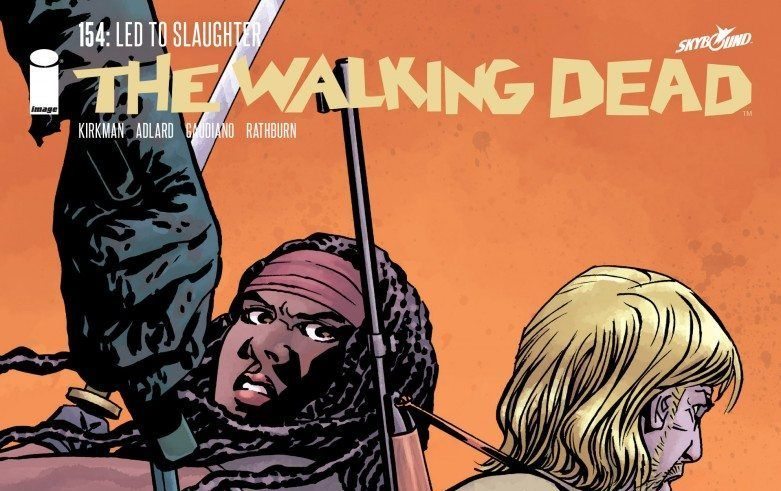 THE WALKING DEAD has always done a great job at slowly building up their storylines in their monthly issues. Issue #154, which falls in the middle of a story arc in a THE WALKING DEAD volume, is no different. With its build up, this issue raises the stakes and continues the story from THE WALKING DEAD #153.

In the last issue, Rick and the town of Alexandria are on alert after they find out Negan has been released. As a result, Michonne and Aaron go on the hunt to track down Negan and bring him back to prison. Meanwhile, Brandon leads Negan to the Whisperers’ location with the intention of defecting and seeking revenge on Rick. However, Negan has other plans and kills Brandon.

READ: What happened in THE WALKING DEAD #153? Read our review here!

In THE WALKING DEAD #154, the plot is centered mainly on Negan and his journey. After issue 153 left us with Negan walking away from Brandon and venturing towards the Whisperers’ camp, this is all we as viewers really want to see. Negan goes looking for the Whisperers and is easily successful in finding them.  Now that he’s in their camp, it’ll be interesting to see what his plans really are, especially since he has different plans than Brandon (to get the Whisperers to kill Rick). It is fantastic to get Negan back into the fold and story. It is so much better for him to be out in the world than in the prison. 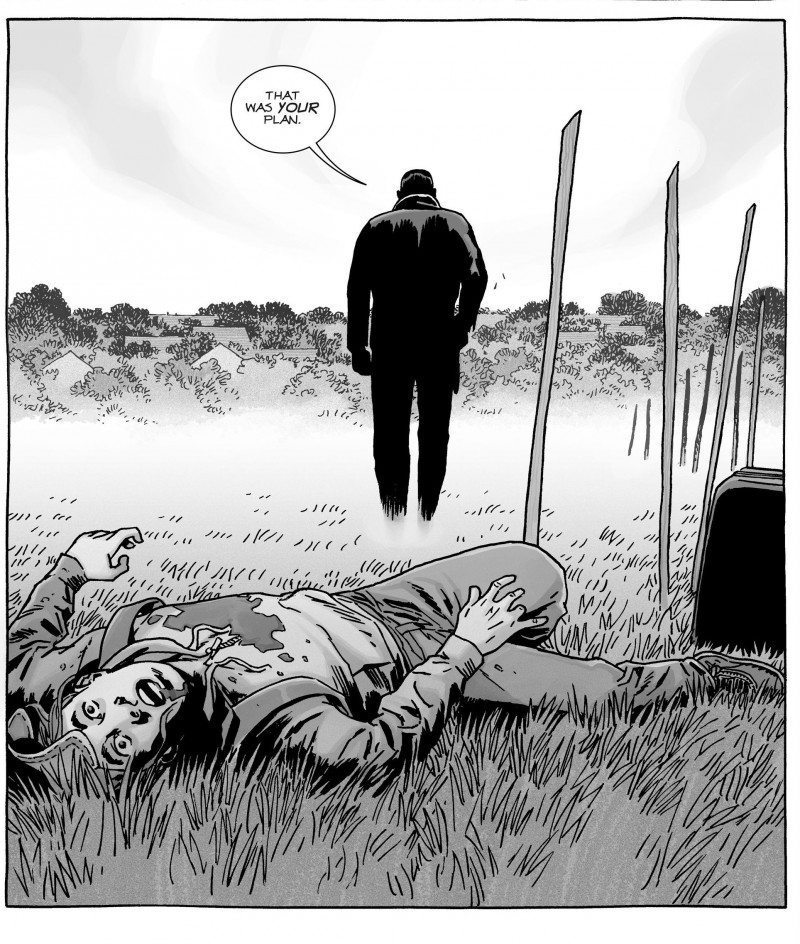 Also, we get a subplot with Eugene that I feel will build up to a great payoff. As previously seen, he has been in contact with someone over the radio. In this issue, we see that the relationship with this person has grown, and the conversations are deeper than ever before. Whoever this person and their group turns out to be will form an interesting plot later on, whether they are friend or foe. In THE WALKING DEAD, the chances are that they will be enemies to the survivors. As we know from watching FEAR THE WALKING DEAD, trusting people on the other end of a radio is a terrible decision with negative consequences.

READ: Want more on FEAR THE WALKING DEAD and the consequences of radio relationships?

With Negan out of the prison, we get more than just an intriguing storyline. We get the awesome character of Negan back. When he meets with the Whisperers, he is as terrifying and charismatic as he has ever been. Its as though being kept captive didn’t change him a little bit, if at all. While surrounded by Whisperers, he shows off how smart he still is when he analyzes his situation by figuring out how many he would be able to kill before they take him down. He also still has his wits about him, convincing the Whisperers to take him in. 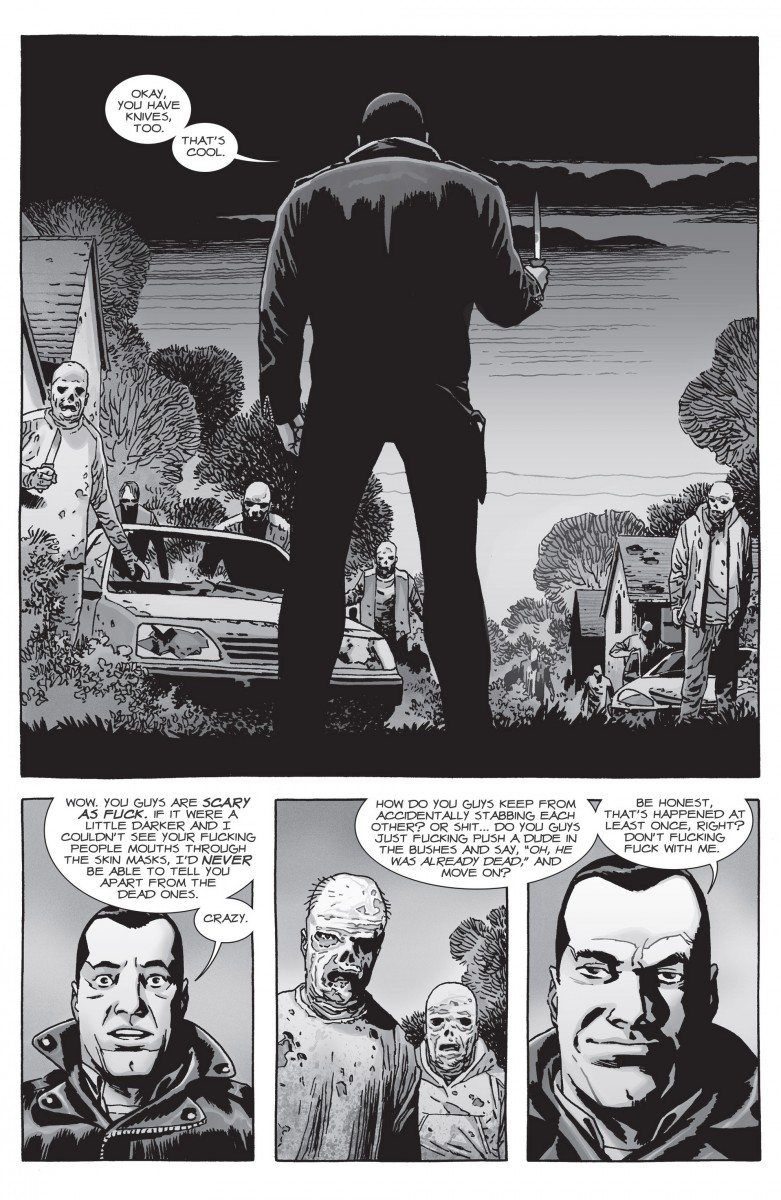 Another character that continues to develop in this issue is Carl. He is growing up and becoming an adult. With that comes independence from his dad, Rick, and doing things on his own terms. Maggie tells Carl that Rick wants him to come back to Alexandria along with a forgiven Lydia, but Carl declines. He states that he has to be his own man and that the Hilltop is now his home. It’s a bit disappointing that he wouldn’t go back to Alexandria. He wants to be on his own, but Carl seems so much more selfish in his decision. Carl is pretty much needed in Alexandria, not just because Rick wants to keep him safe around him. Rick is preparing for war against the Whisperers and Carl is probably one of the best fighters available. Also, Rick is now pretty feeble. We have seen Rick get attacked twice now after the time jump, so the town may need someone like Carl to help lead and someone trustworthy enough to protect Rick. 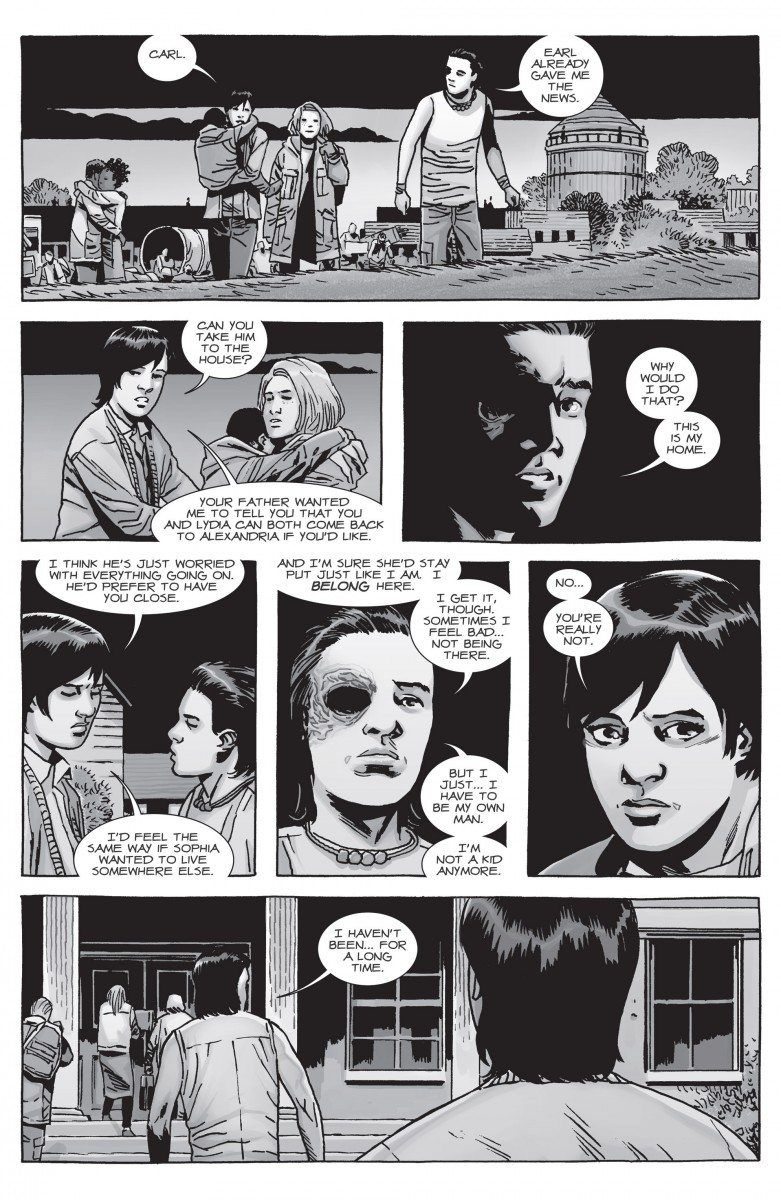 As for the art, THE WALKING DEAD continues with its fantastic black and white panels. This issue does some great things with shading to show the time of day. At the beginning of the issue, Andrea and Maggie are on a hill, talking on horses. The scene looks bright, quiet, and serene, which symbolizes the good. This is then contrasted by the following pages where we see Negan. Here, the art shifts to a darkly beautiful scene with the sun setting and a cloudy look. The dark feel makes for a fantastic evil ambiance that is given to Negan and the Whisperers. Further, the masks that the Whisperers wear continue to be drawn incredibly well. They are all different while it is clear that they are masks covering people’s faces, maintaining their creepy look. 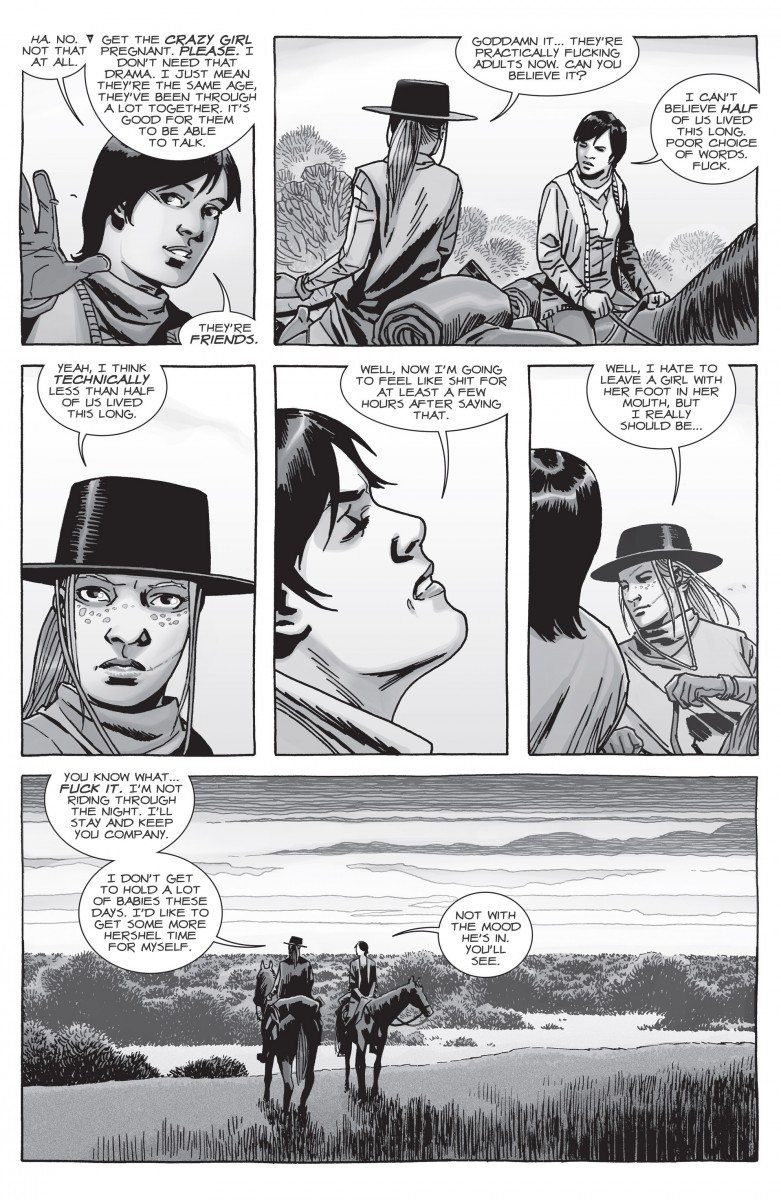 The next issue should reveal more about Negan’s plans. Will he join the Whisperers and don the walker mask? Is he planning on being a mole for Rick? Does he want to save or destroy Alexandria? Maybe Negan wants to take over Alexandria and become a leader again? The answer is up in the air at this point, but the story is set up to both entertain and shock us. We’ll just have to wait until next month.