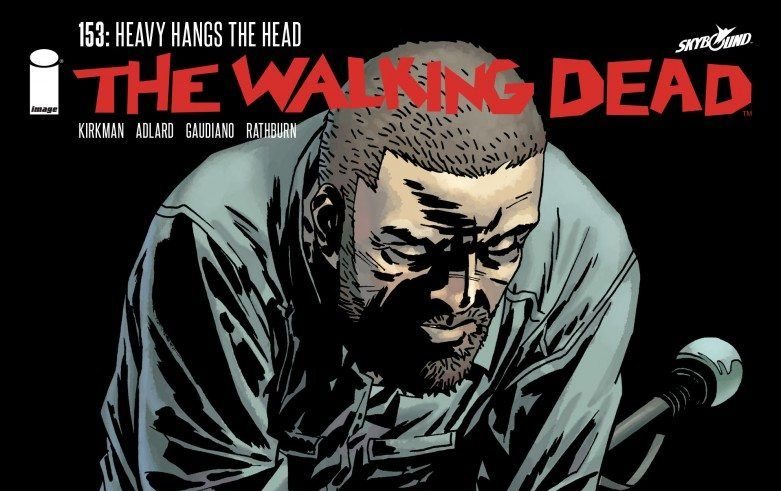 THE WALKING DEAD is known for being a brutally realistic comic full of death at the hands of the undead and fellow survivors alike. This issue shows that society is becoming more civilized by dealing with some political conflict. However, the more things change, the more they stay the same. Especially when you’re dealing with zombies. And Negan. But more on that later.

READ: Need to get caught up? Listen to our WALKING DEAD podcast!

Last issue, Brandon freed Negan from his prison because Brandon hates Rick for killing his father and wants to see him pay. What better way to do that than by bringing back the most notorious villain in the history of THE WALKING DEAD? Rick scrambles to hunt down Negan before he can get to Whisperer territory and warn them of Rick’s impending attack.

This issue is standard THE WALKING DEAD fare, which is a huge compliment.THE WALKING DEAD uses inks so well, and I will always support the choice to run this issue in black and white because it lends itself to shading, which really adds depth and menace to the facial expressions. This helps to convey the intense feelings that tend to come up when everyone you know has been devoured by zombies. (Mondays, right?) The best example of this is the panel where Negan is walking off towards the Whisperers territory.

It is an extremely well-composed panel. Negan appears to be a spot of black on the bright landscape as he walks on to spread his darkness further. This was the last panel of the issue and was really the only panel that stuck out to me artistically. The rest of the issue felt like traditional WALKING DEAD art. It’s good to know you can always count on the last panel to have some good art and a cliffhanger, and it makes sense to flex your artistic muscles for this.

Plot-wise this issue is also fantastic. It starts to tackle some of the political issues that are coming up in the newly established society. Paul shoots a member of the Hilltop, Marco, because he thought Marco was a Whisperer. This shows the grip that fear holds on the people of Alexandria while they’re facing this new threat. More importantly, it shows the negative effects of the anti-Whisperers stance. While it did unite everyone against a common threat, it also caused Paul to act without thinking and injure an ally. It poses an interesting threat. Marco is not gravely hurt, but with everyone itching to fight the Whisperers, things are bound to get out of line. I feel this is extraordinarily relevant to today’s mass shootings and the media climate of fear, which sees society turning allies into enemies. These themes have become ingrained in our culture and they may resonate with readers as they are explored in plot of this comic.

Old threats still remain. Negan is on the loose, and we get a little zombie killing action with Dwight and company. That’s not what makes this issue good though. What makes this issue good is the continual build up of tensions among all of our favorite characters. Seeing how they respond to these threats reveals their true colors. Rick is scrambling to take care of his people internally while taking measures against the external threat of Negan. Dwight has really taken charge. He leads his people against a pack of zombies and reminds them that the Whisperers could very easily overpower them if they aren’t more careful. His best moment comes when he remembers how far he’s come since the saviors.

The symbolism around Lucille is changing along with Dwight’s character. Seeing such an infamous weapon re-purposed for good is something I’ve never seen before. It’s an important decision because it shows the progression from savagery to civilization. Isn’t that what the endgame of this book is all about? For Alexandria and the Hilltop, yes. For the Whisperers and Negan, no. It’s this conflict that will have huge consequences for the rest of the series. They’re coming soon, and I can’t wait.