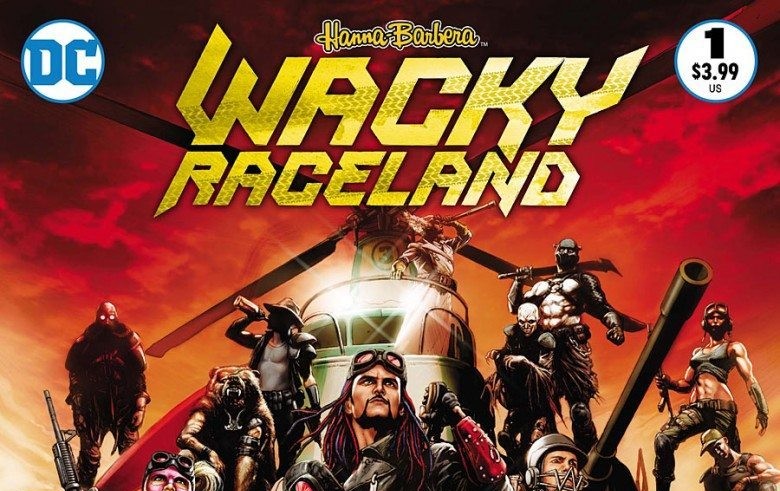 Earlier this year DC Comics announced they’d be publishing books based on the cartoons of classic animation studio Hanna Barbera. The most recent title in the line is WACKY RACELAND from the creative team of Ken Pontac and Leonardo Manco. The book takes the characters from 1960s Saturday morning comedy WACKY RACERS and changes the setting to a post-apocalyptic war zone.

The issue begins with a shot of the trademark WACKY RACERS vehicles parked outside of a bar. The cars begin speaking to each other, lamenting that they do all the work and the drivers get all the glory. Inside the bar we’re introduced to some barely recognizable versions of the cartoon’s characters including Penelope Pitstop, Dick Dastardly, and Mutley. As a bar fight breaks out between the racers and the bar’s patrons (including a three-headed mutant) the issue’s narrative time-shifts back to Penelope’s origin. Penelope is racing away from a massive flood in vain and is killed by a giant wave. She’s awoken by a mysterious voice who proclaims itself “the announcer.” It has brought Penelope’s car to life using AI, and offers her the chance to race for entry into the only city in the world not affected by the disaster, known only as Utopia. The rest of the issue time-jumps back and forth between the bar-fight and a race the group competed in earlier that day. 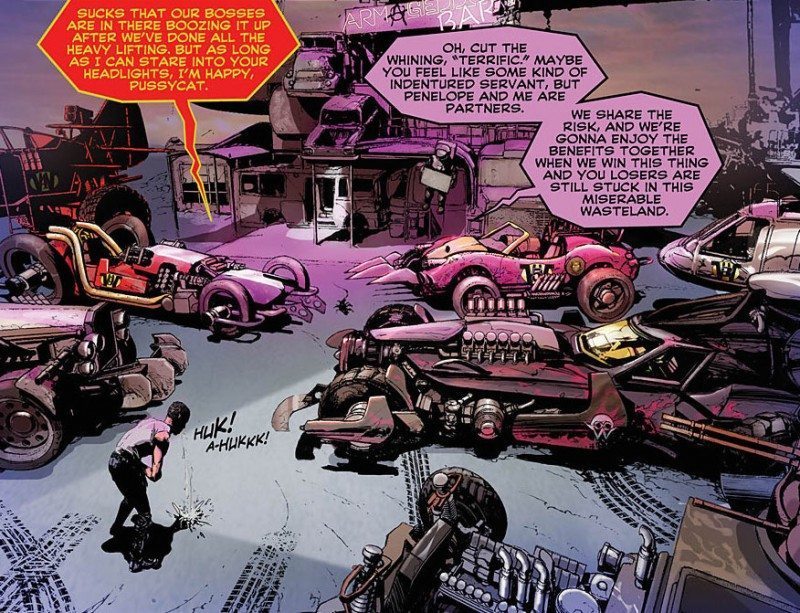 There’s also a B-Story after the main plot concludes focusing Lazy Luke and Blubber Bear. They’re two young kids who get drunk on the day of the apocalypse. As time moves on they grow into alcoholic adults. When one of them is mauled by a bear and suffers brain damage, the other skins the bear and uses parts from the skinned animal to replace his missing friend’s body parts. It’s then that “the announcer” contacts them to be part of the race. 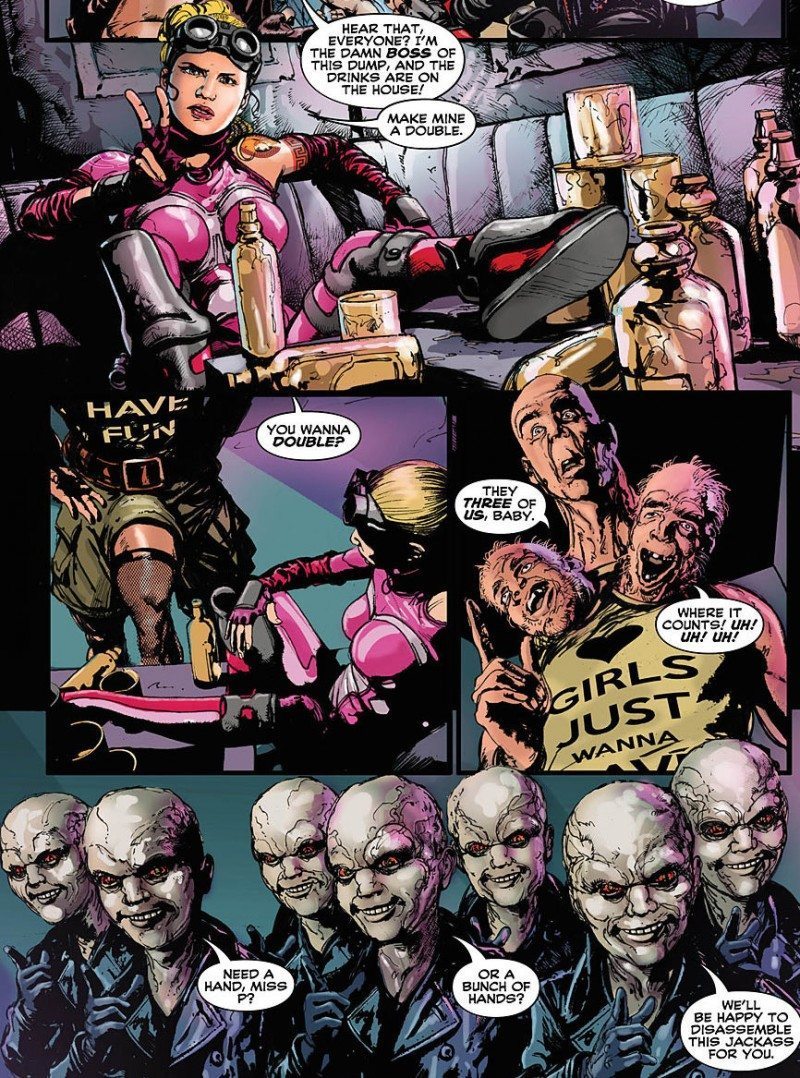 I was initially very excited at the concept of WACKY RACELAND. I remembered the cartoon from my youth, but I didn’t really have any attachment to it and looked forward to the reimagining.  I hoped it would be a Hunger Games-esque satirical look at the end of the world. Unfortunately, the book is a muddled mess. For starters, there’s nothing about this that calls for the WACKY RACERS name. It could simply be a apocalypse tale in the vein of MAD MAX and it would read no differently. The time-jumps are hard to follow, and the plot is nonsensical. The overall idea of “the announcer” could eventually develop into something interesting but right now just seems like a deus ex machina to explain the story. There’s also a major logical gap between the main story and the backup tale. In her origin flashback, Penelope is the same age during the initial apocalypse as she is during the “present day” racing sequence. Despite this, somehow Lazy Luke and Blubber Bear aged from young boys to grown men during the time between the end of the world and when they’re chosen by the announcer.

READ: Catch up on DC’s reimagining of SCOOBY DOO here!

From a character standpoint, once again there’s really no reason for this to be a WACKY RACERS story. Penelope Pitstop is a kick-ass woman in pink bondage gear, Peter Perfect is an idiot, Dick Dastardly looks exactly like a MAD MAX character, Mutley is some kind of mutant cyborg-dog hybrid, and the Ant-Hill Mob are apparently a group of zombie dwarves. Red Baron is a Nazi and Sergeant Blast is transgender, though we learn nothing about either character outside of expository dialogue that state those traits. None of the other racers are seen outside their cars, though we know Lazy Luke and Blubber Bear are an alcoholic and a brain-damaged man half made of bear parts, respectively. Again, I have no personal attachment to these characters so none of these changes offend me, but they mostly seem controversial and dark solely just for the sake of it. Honestly, I think the story would greatly benefit from having original characters. It’s obvious that Pontac has a vision for the series that perhaps could be more clearly executed if he wasn’t attempting to meld it with the cartoon series.

Manco’s art is the issue’s high point for sure. While the character designs are hit or miss, the overall look of the world looks great. The designs of the living cars are a particularly highlight. I’m hoping there will be more in-depth sequences with them in future issues, as each of them has really specific design elements that I’d love to see in action. 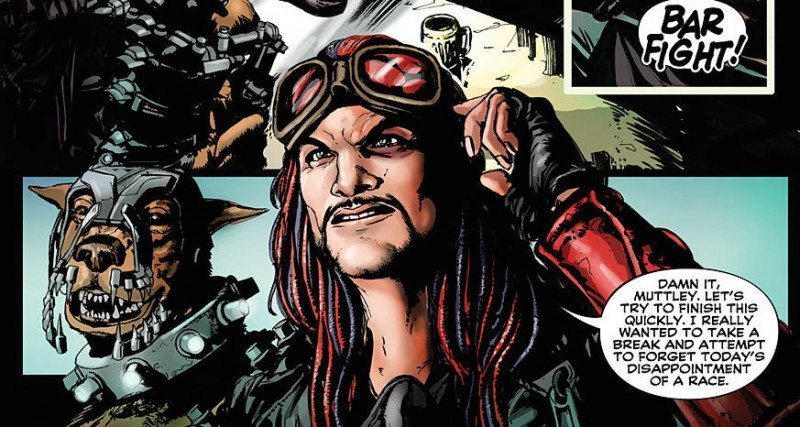 WACKY RACELAND #1 is a bit of a mess. The issue tries to meld WACKY RACERS with a post-apocalyptic war-world and both concepts suffer because of it. While the art is pretty to look at, it rings mostly hollow due to the story.