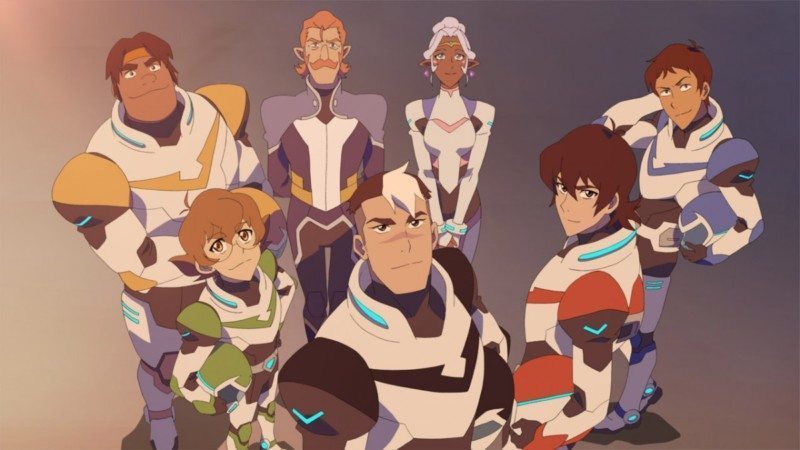 Like witty dialogue? Sassy adolescent bonding? Sci-fi fantasy space elf kingdom? Magical science mecha lions? Then the verdict is unanimous: Whether you’re a returning or new fan, you must see the new Netflix original series, VOLTRON: LEGENDARY DEFENDER (VLD). Netflix released the entire first season on June 10, 2016, just a few weeks ago, and fans are already begging for more. The original series, VOLTRON: DEFENDER OF THE UNIVERSE, was released in 1984 in three incarnations. These included the NEAR UNIVERSE, MIDDLE UNIVERSE, and FAR UNIVERSE versions, commonly called “Vehicle Force”, “Gladiator Force”, and “Lion Force,” respectively. The final incarnation, Lion Force, was the most successful version, until now.

The current version is incredibly popular for several reasons. First, if you’ve ever seen AVATAR: THE LAST AIRBENDER or THE LEGEND OF KORRA, you will immediately recognize the distinctive style in VLD. That’s because the current showrunners and head writer worked on both series earlier in their careers. They use their expertise to imbue the series with all the necessary nostalgic elements, as well as further enhance and transform the story. As a new fan watching the show for the first time, I don’t have the expertise to compare the new and the old elements. However, what stands out to me, even as a newbie, is the brilliant way VLD handles gender roles and characterization.

READ: If you enjoy other anime-inspired series, check out this article about RWBY!

For those who haven’t watched the show, here’s some background information: For thousands of years, the Galra Empire has gone through the universe, conquering and destroying planets. At the time when the series begins, the empire has already conquered a staggering majority of the galaxy. The only known threat to the empire is a 100-meter-tall robot warrior called Voltron, comprised of five color-coded lion mechas (piloted robots). Originally, King Alfor of the planet Altea possessed the legendary defender, but at the peak of the war, he hid them and his daughter, Allura, from the Galran Emperor Zarkon. At the start of the series 10,000 years later, a new group of pilots stumble upon the Blue Lion.

Lance, Hunk, and Pidge are a team of cadets at Galaxy Garrison, Earth’s primary institution for space exploration. They pick up on a crashing alien ship and find out a pilot named Shiro is aboard it. Shiro was presumed dead after he and his team disappeared on an expedition on Kerberos, one of Pluto’s moons. A Galran ship had actually kidnapped the expedition team, and somehow Shiro returned. In a series of complicated events, Keith, an ex-cadet, and the team of cadets rescue Shiro and discover the Blue Lion. The mecha takes them to a castle on the other side of the universe, where they meet Princess Allura. Suddenly, the five space pilots become the next Paladins, reunite the lions, and begin their war against the Galra Empire.

Now, onto the great intersectional feminist elements of the series! Intersectional feminism is the concept that women are oppressed in varying degrees, depending on their multitude of social identities. The first thing that stands out about this incarnation of Princess Allura is her appearance. She’s a dark-skinned princess, where the previous incarnations of Allura both had blonde hair and pale skin, resembling white women. The positive impact of cultural representation on young girls and people in general is incredibly significant. Glozell Green, an African-American comedian, burst into tears after seeing Tiana from Disney’s PRINCESS AND THE FROG, citing the lack of any Black people in previous Disney parades. The greatest thing about Allura’s change of image is that it is so effortless. She simply exists as she is, with all the regal and authoritative qualities, like any woman can be in real life.

Furthermore, Allura is not a kept and protected princess. She is not only the last representative of her race, but also commander-in-chief of the only known power heading the war against the Galra Empire. She spends most of her time with her adviser, Coran, maintaining the castle’s defenses and training the new Paladins. She also provides tactical support during Voltron’s battles, after restoring the castle to full power. Allura is also incredibly strong, as shown in episode 10, “Collection and Extraction.” She can easily toss an adult-sized drone over her shoulder, or an actual adult (Shiro) into an escape pod.

LOOK: Interested in politics? Read our article about Slacktivism

Here come the major spoilers, so watch out! Pidge Gunderson is one of the five Paladins of Voltron, piloting the Green Lion. Also, Pidge’s birth name is Katie Holt. Her father and brother, Sam and Matt Holt, were the other two members of the Kerberos mission that got kidnapped with Shiro. The question is: why did she hide her identity from everyone? Was this a MULAN situation? Well, not exactly.

Previously, the media named the Kerberos mission a failure due to pilot error, and presumed all members dead. In the episode “Tears of the Balmera,” it’s revealed that, after hearing this, Pidge broke into Galaxy Garrison and hacked into the Kerberos mission files. She immediately discovered that there was no indication of pilot error. However, Commander Iverson caught her, and then made sure that every administrator knew her face and name, emphasizing not to let the same “little girl” back in. Afterwards, Pidge entered herself as a student with a different name and ID in order to learn more about her family’s whereabouts.

This set up is great because it shows Pidge’s technological capabilities and personality. Her gender has nothing to do with her story. She doesn’t suddenly change her clothes or style after her big reveal—she is comfortable as she is. That is what makes this a feminist move. No one has any reservations about Pidge’s capabilities before or after knowing her gender. She is a technological and tactical genius who saves her team in “Tears of the Balmera.” Aside from Lance’s single outburst of disbelief, no one else is curious about her gender. Even her enemies never belittle her for being a girl, only for being small in stature and inexperienced.

READ: Interested in more space-age feminism? Check out this article about the ALIEN movies!

While the sexy alien trope is well-known and well-used, VLD valiantly avoids applying it. When Hunk and Coran visit the Balmera, a planet-sized dormant creature, for an energy crystal, they meet the natives. Hunk (above, right) and Shay (center) form a close friendship after she helps him hide from the Galra Empire. She and her brother Rax (left) are very similar in appearance, with slightly varying features. She isn’t slender, she isn’t curvaceous, and she certainly doesn’t have human breasts. The creators of the show keep her true to a realistic alien species—at least as realistic as aliens can be.

Even the attractive Nyma, in “Taking Flight,” isn’t your generic alien babe. She is taller than all the humans, has thicker arms and hands, and has an elongated, inhuman neck. While Lance is taken by her, she’s not solely eye candy. She and her partner have a momentary role to play as negative side-effects of the Galra Empire.

Basically, what makes VOLTRON a great feminist series is not what it does, but what it doesn’t do. There is no extended discourse on any of the female characters’ qualifications in spite of their gender. When the Paladins advise Allura against going to the front lines with them, it’s because she is the last of her royal family and the leader of the fight against Galra. She is clearly indispensable, not a weak little girl. There are no characters pandering to the “sexy alien babe” trope. Previous incarnations of the VOLTRON series have included shower scenes or undressing scenes of Allura, but not in this season (and hopefully not in future seasons)!

The writers create an exciting sci-fi fantasy story with strong characters all around. In the day and age that the story takes place, there is no reason for there not to be a qualified female Paladin, or a dark-skinned alien princess. It’s not a show like GAME OF THRONES that constantly shows women overcoming misogyny; instead, misogyny just doesn’t exist. The characters respect and rely on each other for who they are.