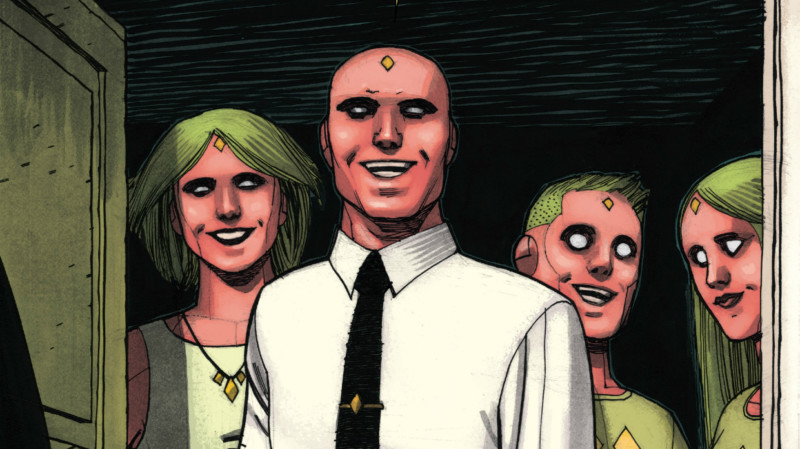 Warning: spoilers for all issues of Marvel’s 2015 comic series, VISION.

At the front of the Vision’s house, there is a door. Since he and his family can separate their molecules and phase through objects, they have no need to use the door. But it’s there. Vision creates a family. A heterosexual family with two children — the pinnacle of the supposed norm. He moves them to the suburbs. He builds a dog, sends his children to school, corrects his wife on her grammar. Why? Why go through all of this trouble when Vision has no actual need for any of it?

Through the 2015 Marvel series VISION, superheroes trying to assimilate becomes a metaphor for the American Dream.

The American Dream is not a simple concept. It has many facets – suburbia, capitalism, individualism, jingoism and more. In this article, I focus on two main aspects: the desire for normality through patriarchy and stability. The obsession with the American Dream calls back to a time when the United States was in economic boom, and there was an illusion that many people could work their way to the top. I say illusion because that dream was not available to everyone. It is truly not achievable to many members of the United States even now, after significant civil progress.

Yet, we are brainwashed, just like Vision, to lose parts of ourselves in order to blend into the greater American picture to try to reach that dream. And through VISION, we see exactly how terribly things go wrong when you try to become something you’re not. And even more so, when you try to return to a past that isn’t there anymore.

Vision is the Synthetic Great Gatsby

Here’s a phrase that makes any person more liberal than Ronald Reagan shiver: Make America Great Again. This statement, which largely calls upon a return to “American values,” propelled a president’s campaign that ran on bigotry. But if you look further, there is a simple cause for the alt-right’s intolerance: a desperate need to repeat the past.

They want to make American great again, insinuating that there was a time in America where things were good. Given the romanticization of American history and the jingoistic attitude that American schoolchildren are instilled with, it’s no wonder they believe that the right way to go forward is to go back.

READ: Want another theory on American homogeneity? Check out our analysis of HONOR GIRL!

It’s obvious this need to return to the “golden days” also comes with the dangerous logic that existed in that time. Faux logic about women and their place in society, gay people, racial and religious minorities, and so on. We’re still unlearning the bigotry from when America was dubbed great. We’re still feeling the effects, generations later.

When you view the past with rose-colored glasses, things go wrong. This is something that Vision, all-knowing synthetic creation that he is, hasn’t grasped. He is trying to make his life great again. Throughout the series, he reminisces about his time with the Scarlet Witch. He creates his family in her and their fake children’s images. While Vision often struggles with his synthetic vs. human identity, this desire for him to have a do-over is the most human trait of all. But unlike most humans, Vision can actually get further than most in this endeavor.

In order to blend in, Vision ends up assimilating into American culture too well. He, subconsciously or not, creates his family to revolve around him, the patriarch. I mean, he titles his created family VIrginia, VIv, and VIn. In this way, he calls upon a notable biblical patriarch: the first man, Adam, who receives power by naming all of God’s creations. This act of naming asserts his power and masculine dominance, as Eve does not get to partake in the same activity. So, because he needs to conform, Vision takes on some of America’s most insidious traits: sexism. And ultimately, it is this sexism that drives his wife Virginia crazy.

READ: Want more comics that comment on sexism? Check out our review of CROSSWIND #1!

Virginia experiences much of the madness that comes with the stereotypical role of the housewife. She stays at home while her husband goes to work and provides for the family. Vision corrects her many times about her role, whether it be in regards to her language, behavior, or appearance. There’s so much pressure for her to be perfect, as there is on many women, that when she commits murder, she covers it up. Virginia’s single lie leads to another and another until she is beyond repair.

It’s only until she breaks out of her role that Virginia shines. When she kills Mancha at the end, she reverses the given role of husband and wife, of man and woman. Now, it is her husband’s honor she defends, his fall from grace that she prevents. He is the emotionally unstable damsel who is going to get into trouble. She becomes the leader of the family as she makes a sacrifice for the good of them all.

America prides itself on stability. A stable marriage, family, and job is the essence of the coveted American middle-class — exactly the life that our superhero main character dreams of. However, all of these facets of life are anything but stable, both in real life and in VISION. But, variation and disruption of the traditional are what lead to new things.

Take the concept of marriage for example. In the west, it has been a patriarchal construct that took power away from women. Since then, through protest, philosophy, and politics, we have deconstructed and recreated marriage. Now, marriage can consist of more than two people, two people of the same gender, or two people of a different race. Women don’t have to change their names or have their worth tied to a man. Sure, that still happens but the point is, openness comes to a traditional concept once it’s been destroyed.

Because Vision wanted all of these ideals, because he was willing to do anything to secure them — he attracted villains to his home, drove his wife to madness, and endangered his entire family to get revenge. Yet, after all the chaos and murder, when Vision’s whole world seems to fall apart, something new falls into place. He ends up as a single father, no longer a part of the idea of a “normal” family.

In addition, Viv finally accepts her weirdness, instead of attempting to be something she’s not. For the entire series, Viv and Vin both struggled with definitions of normalcy. Viv was also traumatized by the death of her classmate, which her mother caused. “I am not normal, Father,” she says with a smile. Through this revelation, Viv can hope to move past her history and become her own person. But Vision himself cannot accept this fact. We see him tinkering with another model of Virginia with a smile on his face.

What is VISION Trying to Tell Us?

While some may see the ending of VISION as sweet, to me it seemed rather ominous, like a cycle about to start all over again. Vision, the genius superhero that he is, hasn’t learned anything at all.

And America, what have we learned? In our country (and many others), a new surge of fascist ideals has risen. Recently, many people had begun to develop hope about social, legal, and environmental progress. Just as that progress began, a large outpouring of support for fascism based on “traditional values” erupted all across the globe. The United States, the United Kingdom, France, and Japan to name a few, have all seen the rebirth of these ideas even though we have seen them fail and hurt others time and time again. I’ll speak on America’s current state in particular.

The role of “savior” has always been under America’s belt, earned title or not. From World War II to Vietnam to now, Americans pride themselves on being the world’s superhero. We remind ourselves again and again as an illusion of altruism. Similarly, Vision reminds himself constantly of how many times he has saved the world in order to remember that he is a good person. Both he and America have a past that they can’t let go.

Virginia is not the Scarlet Witch. The Roaring Twenties have passed. The variables are different now. Change occurred and can’t be undone. All in all, the only way to move forward, is to move on.