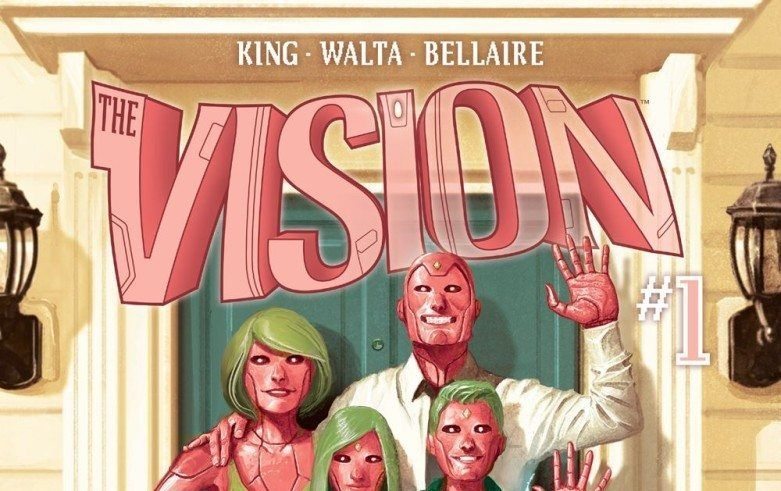 Vision #1 is the first issue of the All-New, All-Different Vision ongoing series and our first introduction to the Visions. At some point after purging emotion from his memories Avengers in issue 0, Vision created his own synthezoid family consisting of his wife, Virginia, and children, Viv and Vin. Settling in Arlington, Virginia, the Visions are seen as the world’s perfect family, well, perfect robot family that is. And yet, we come to see that they may not be so happy.

In the wake of AVENGERS: AGE OF ULTRON, it was inevitable that there would be a Vision ongoing at Marvel. My first exposure to the character was in YOUNG AVENGERS, where a teen Vision was created from the brainwaves of teen Kang the Conqueror and dated Cassie Lang. That version of the character was killed off in the Children’s Crusade event and adult Vision was brought back to life at the forefront of AVENGERS VS X-MEN and well, he hasn’t done much since. I loved Young Vision but the adult Vision was a different story. The son of Ultron, “brother” of Wonder Man, and ex-husband of the Scarlet Witch has a complicated backstory; the Vision is not a new-reader friendly character. After the character’s brilliant adaptation to screen in the aforementioned Avengers film and a fascination with the suburban robot family concept, I decided to give this series a spot on my pull list. I was not disappointed as VISION #1 is one of the darkest Marvel books I have ever read and one of the strongest debuts in a post (delayed) Secret Wars world.

READ: Find out what happened to the Vision’s emotions in Tom’s review of Avengers #0!

The issue starts out with an unknown narrator telling the reader how the Visions moved to their current home, 616 Hickory Branch Lane, Arlington, VA. (Guys, 616 lives!) Our narrator begins telling the tale of the citizens of Arlington, young dreamers who believed they’d save the world before the suburban life of love and children and compromise ran over those dreams like an out of control mini-van. The spotlight is then placed on George and Nora, the Vision’s neighbors, who bicker outside the family’s door about the appropriateness of giving cookies to a robot family. The door opens and we are introduced to The Visions: Vision, husband and loving father, Virginia, doting mother, and the twins, Vin and Viv. Showing George and Nora around the house, we get our first glimpse into possible marriage troubles between the husband and wife, as Virginia becomes silent, Vision proudly shows them the family Everbloom tree, a gift from his previous wife, the Scarlet Witch. As the neighbors depart the house and our narrator drops a major plot bomb midway through the issue; one of the Visions will light their house on fire, which kills them both. 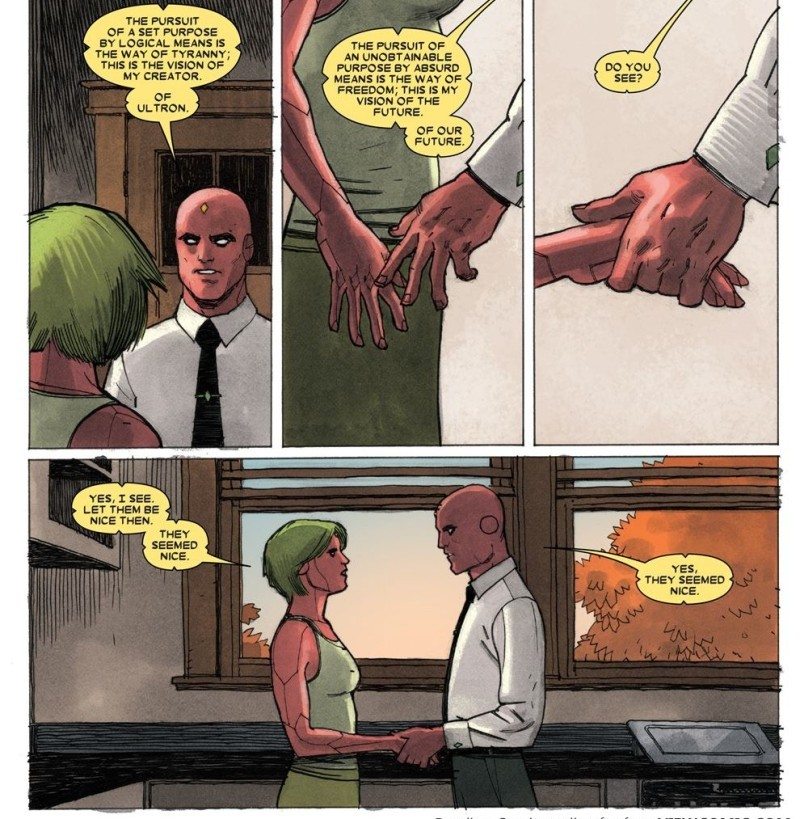 The issue then opens into a quiet moment between Virginia and Vision, where he reprimands her use of logical grammar. He asks her to do this so she may be more human, to pursue an unobtainable purpose by absurd means so that they can be free and not bound by logic as his father, Ultron, was. The issue then slips mini spotlights on the family as we see the family documented on social media by onlookers, Vision desiring a salary from the President, Virginia crying over the pre-loaded memories in her brain, and the children consuming mass information instantaneously and arguing over what they’ve learned.

READ: Check out Tyler’s review of Marvel’s Agent’s of S.H.I.E.L.D!

The issue’s narrative is built to show the reader how hard Vision is working to maintain his normal, suburban life and how the family struggles to keep up the façade in the high school sequence. Vision goes out of his way to tell his kids to act like “normal” children and not the developing synthezoids that they are. His wife struggles to understand why his children have to leave when they are different from normal children and Vision cannot even explain to Virginia why it is important because he does not understand himself. It is just the “normal” thing to do. The issue ends with Vision heading to an Avengers meeting and the rest of the family sitting down to review homework. The normalcy of their life is truly broken when Grim Reaper literally breaks through the walls and stabs Viv through the stomach. As she lies on the floor, robotically calling out “Mommy?”, Grim Reaper begins to attack the family one by one. Calling them imposters, a family made from a stolen copy of his brother that he has to everywhere, he moves in to kill Vin before Virginia beats his skull in with a metal tray. The final words she speaks are “don’t tell your father” 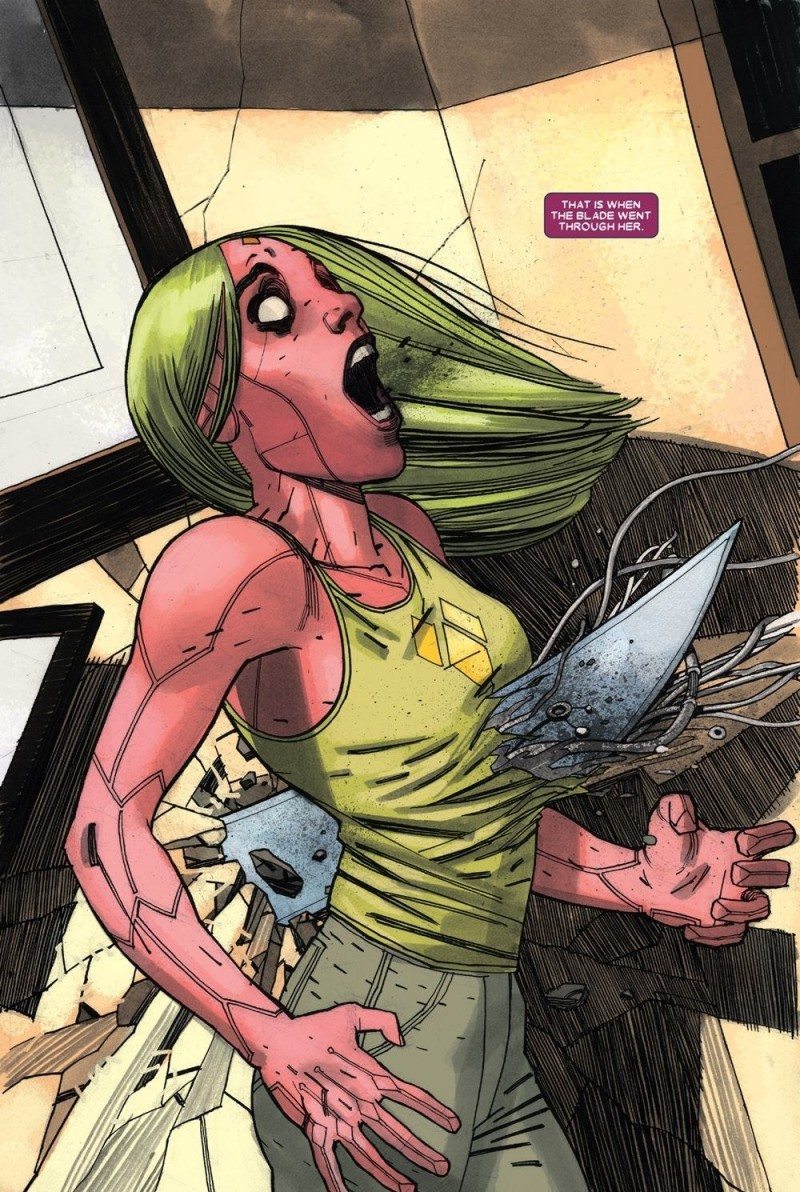 As I said earlier, this is a very dark Marvel comic and unlike anything I have read from the company prior. The comic reads like a Twilight Zone episode, a robot family tries to maintain a normal life in the suburbs and plot-twist, there is nothing normal about them and bad things are coming. Vision removing his emotions from past memories to escape his haunting nightmares seemed like a good idea to him but is reminiscent of motivated forgetting, a psychological behavior where a person may consciously forget an unwanted memory. The character creates a false sense of safety for himself in doing this and creating a family in order to live a more “normal” life is just strengthening his safety net. Tom King does a near flawless job of characterizing Vision as a person who so desperately desires a sense of normalcy that he controls every aspect of his life from the way he dresses on a daily basis, the way his wife speaks, to the way his children act in school. The opening narrative of the young dreamers who moved to Arlington and led a boring, compromised life is what Vision wants, and the way he achieves it seems almost autistic in nature. In a way, it reminded me of how Ultron so desperately wants the approval of Hank Pym and after Vision’s conversation with his wife, I get the impression King is going to show us how similar the father and son can be.

READ: Wanna catch up on All-New All-Different Marvel? Check out our guide here! 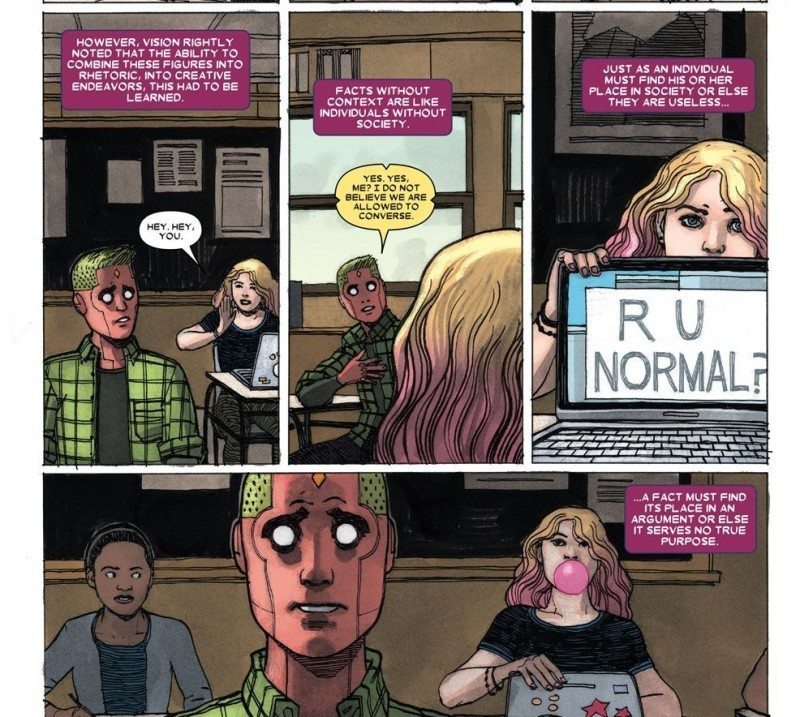 Gabriel Hernandez Walta and Jordie Bellaire sync perfectly in this issue. Walta’s pencils perfectly capture the Virginia suburb, but his ability to convey emotion in synthezoids was what blew me away. Virginia, Viv, and Vin are all emotionally active characters throughout the issue and yet, Vision is stoic and unmoved. The one moment of feeling we are exposed to from Vision is when he is awoken from his nightmare in a terror; the look of sadness and longing on his face as he looks at his wife gave away his feelings for the Scarlet Witch a few panels before the narrator told who Virginia’s brainwaves were based on. Bellaire makes every book she works on feel alive, and this one is no exception. Her coloring allows the book to give the reader a sense how a true Virginia suburb looks like during the fall, and that’s something I also never really notice in comic books.

Vision is looking to be one of the hottest books going into 2016 and I can tell you I’m sticking along for the ride. The look of fear in Virginia’s face in the final panel of this issue wasn’t out of her actions, but the thought of her husband’s reaction to the break in normalcy. This is a story about an unhealthy man starting a family, first and foremost, and I can only imagine what happens when his first family comes into the picture.

CHECK OUT More Reviews from ComicsVerse!