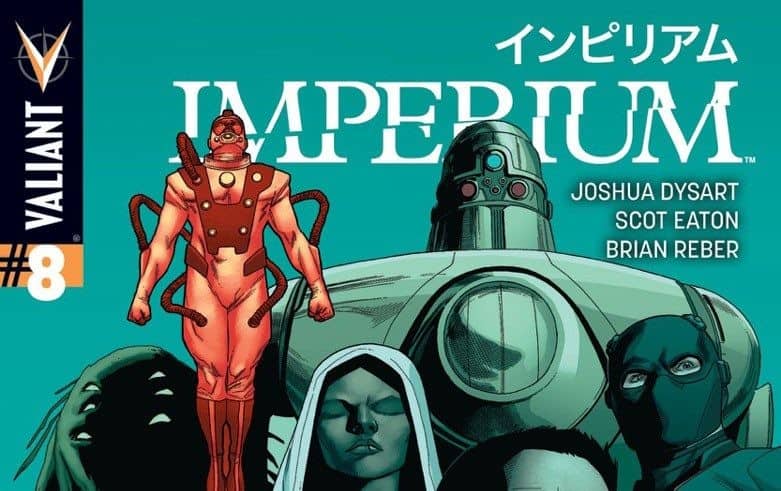 Welcome to another wonderful week of Valiant Comics! X-O MANOWAR continues its latest arc while IMPERIUM wraps up its short Divinity arc. Both comics feature some significant Vine activity. While this is to be expected in X-O, the prevalence of the Vine in IMPERIUM (along with Divinity and other elements) cements it as another title dedicated to pulling the Valiant Universe together. For anyone who doesn’t know, the Vine are a race of aliens who, until recently, enslaved humans. Aric of Dacia, the titular X-O MANOWAR, found himself enslaved by these aliens, and has since developed a very complicated relationship with them. Especially considering his armor is an ancient Vine artifact. After defeating their rulers and liberating his fellow enslaved Visigoths, Aric formed a tenuous truce with some parts of the Vine, which has led to the current situation. Meanwhile in IMPERIUM, Harada has lobotomized and forced a high ranking member of the Vine to join his ranks in his endless quest for world peace (and domination). The Vine’s ubiquity in Valiant is as important as the Skrulls in Marvel, and I’m glad to see them in these titles. Now, on to the reviews!

READ: New to Valiant? Try out these titles first! 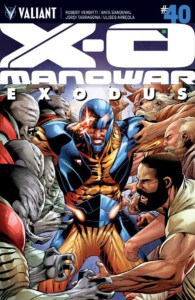 Aric finds himself in the middle of a crisis! The displaced Vine, having come to Earth seeking asylum following the destruction of their home during the Dead Hand arc, find themselves between the Earth’s peacekeeping force GATE and Aric’s Visigoths. The situation was very nearly dire in the previous issue, with a conflict imminent. Aric is forced to act as a peace keeper, diffusing the conflict through words rather than ruthless murder.

Aric’s behavior in this book really shows how much he’s changed since the beginning of this title. He was a violent Visigoth Warrior, and through his trials he has gained  significant increase in power and responsibility (like Spider-Man!). Aric has become the king of his people and an emissary to the nations of Earth, as well as (now) the Vine. His old tactics just won’t work, and he struggles with that. I appreciate that Venditti has allowed Aric to change so much, and I look forward to seeing even more as he continues to struggle with his three allegiances. 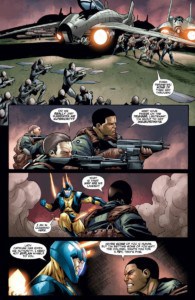 The tensions between the Vine, the Visigoths, and GATE are all well-founded, and I think they’re unfolding in a (fairly) realistic way, given the situation. The Vine’s situation is depressing and has a number of connections to real-world situations. These Vines were not the Armor Hunters who destroyed LA, but what is their place in the universe? I imagine this story will resolve most of these questions in the next few issues, and I’m always pleased to see different types of conflicts in superhero comics that aren’t just resolved by punching.

Sandoval, Tarragona and Arreola’s art is strong as usual. The focus they place on characters and technology is nice and generally well-defined, though the lack of backgrounds leaves some panels a bit cold. With X-O’s continual shipping schedule, I would much rather have some lean backgrounds and an on-time comic however. 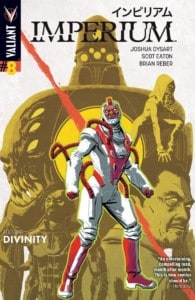 Harada’s confontation with Divinity comes to a head in this issue. Their incredible, yet different powers come together as Divinity attempts to skew Harada’s line of thinking. Harada, the planner that he is, wants to defeat and use Divinity in his quest for world peace/domination. The majority of this issue features Harada and Divinity conversing as Divinity throws Harada’s consciousness through time, forcing him to confront his own weaknesses and his propensity for using people to reach his goals. Their struggle is interspersed with scenes following Harada’s attack on Project Rising Spirit’s submarine, Leviathan, showing Mech Major and LV-99 (Harada’s captured Vine warrior) escaping with their defectors.

Eaton and Faucher’s is great, and it reminds me of Dale Eaglesham’s work in FANTASTIC FOUR. Between space, underwater, and the activities on the Leviathan, there’s a lot going on and it’s clear throughout. Brian Reber’s colors are nice, though I do often prefer a flatter look. 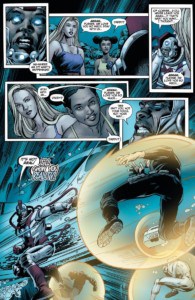 Like this month’s X-O MANOWAR, this issue contains a large amount of talking and an interesting resolution of conflict that is refreshing to see in superhero comics. Harada shows a bit of remorse and vulnerability in this issue, which reinforces his strength as a character. He’s a difficult man, but his goals are seemingly benign, despite his actions to the contrary. Placing this kind of character as the focal point to this comic was a great move, and these last two issues have really emphasized and explored his possibly altruistic motives. The epilogue features a hook suggesting further development for Mech Major and a Vine infiltrator among harada’s ranks, setting up the next story (called “The Vine Imperative”) very nicely. Again, the Vine are ingtegral to this book’s conflict and I love the connective tissue visible between this and other Valiant titles.

NEXT WEEK IN VALIANT: 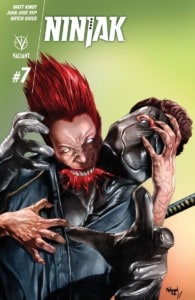 Ninjak’s systematic hunt of the mysterious supervillain Shadow Seven organization continues in NINJAK #7, only two weeks from Ninjak’s last (two) comics! Wonderful to see him so often. Over in UNITY #22, War-Monger’s likewise systematic elimination of Unity members continues as well, and should feature some interesting flashbacks and present-day sequences as the story comes to a climax! See you next week for another great week in Valiant!