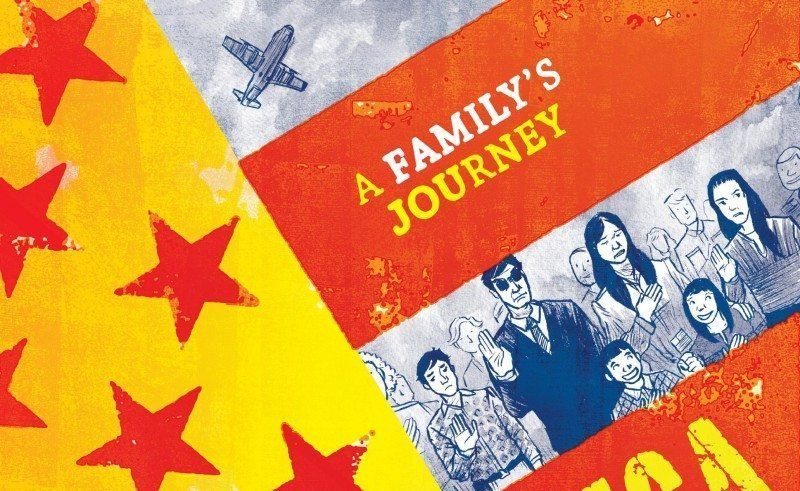 VIETNAMERICA—a portmanteau of “Vietnam” and “America.” G. B. Tran has written a graphic novel that explores this nebulous land that is neither Vietnam nor America in an intergenerational exploration that intertwines two disparate countries during the Vietnam War.

Above are Tran’s explicit imaginings of the country that would be “Vietnamerica,” a mish-mash of cultures. The Washington Monument dons a Communist star, WASP suburban houses complete with lawn and driveway are juxtaposed with iron-roofed shacks, built to withstand heavy tropical rains. Both cultures are confused and overlap―just like those within Tran’s own family. The beauty of this graphic novel lies in Tran’s expert ability to make a cohesive image like this one out of the chaos. Throughout the novel, he weaves the complex timelines of his Vietnamese father and mother, and of himself, a second-gen American, into a tapestry so intricate it belies the fact that this is Tran’s first widely published graphic novel.

VIETNAMERICA opens with Tran’s family in their escape as refugees from the Vietnam War. The following pages culminate in a full page, a monochromatic red, save for an ominous quote: “A man without history is a tree without roots.” This introduction sets the stage for the rest of the novel, which concerns itself with the dual tragedies of war: violence and neglect. Tran, in a decisive act of assimilation, decides to forgo his Vietnamese name, Gia-Bac, for the more pronounceable G.B. This is an act of cultural neglect, which he acknowledges in the depiction of himself below in his family tree. Tran fumbles with his two name labels, ultimately dropping “Gia-Bac” for the sake of “G.B.,” and practically falling out the frame himself in the process. 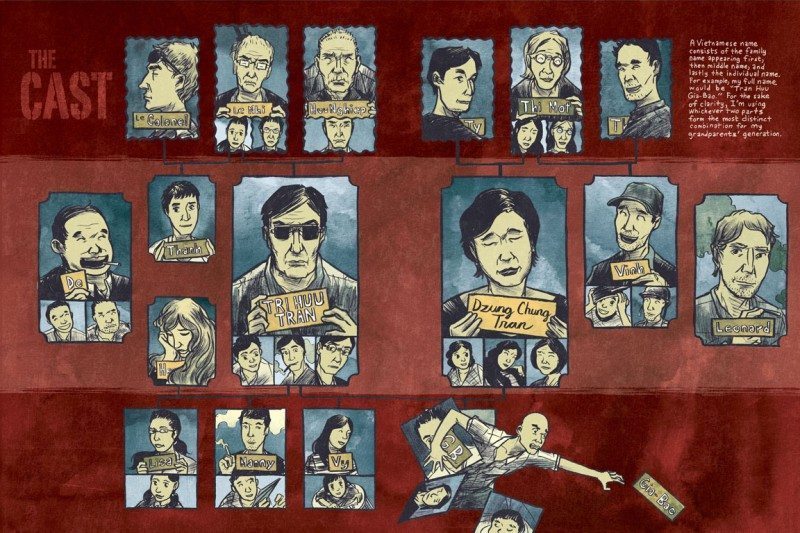 You get a sense that Tran has written this novel to remember the Vietnam he had chosen to neglect. This graphic novel is an act of remembrance and of anti-erasure, both in its content and its purpose as a book. This makes it a fascinating and self-reflective experience for the reader.

Tran writes as if he is both recounting his family’s memoir and as if he is transcribing his family’s oral narrative. To give the impression of listening to a family history, Tran begins most of the chapters with the same conceit: a panel of his mother cooking a different part of the same meal while beginning the narration for a different part of their family story. The effect is re-centering and warm—familial. You can practically hear her tearing the vegetables and smell the spices she tosses into her pan.

The art of VIETNAMERICA is a gorgeous midpoint between realist and stylized—it simulates the hyperbolic hue of imperfect memory, which exaggerates important details and blurs the rest.

The gravity (or lightness) of the memory being portrayed is directly reflected in the color palette of each panel, with (from right to left) the pre-war primary color explosion, the muddy browns of war, and the slate grays and blues of the indifferent present. Tran’s character designs, halfway between portrait and caricature, are each memorable, a feat achieved despite having a near-Dostoevskyan total of 17 named characters, most of which also appear as both children and adults.

VIETNAMERICA spans several genres: war story, ethnodrama, autobiography. It reads like a novel: full of detail, strong personalities, and witty dialogue. But it also holds the contemplative DNA of memoir. If there is a weakness in the book, it is that it can be overambitious, weaving through genres, narrators, and timelines at whiplash-inducing speed which is only tempered by his effective designs. Tran best describes this tight mesh of narratives in his full title for the book: VIETNAMERICA: A FAMILY’S JOURNEY. It is a journey indeed, where the only antagonist is time, and the final destination is memory.