Since I picked up a VENOM: FUNERAL PYRE #1 at a garage sale at eight years old, the symbiotic alien life-form and iconic Spider-Man villain, Venom, has been my favorite superhero. My bizarre love for Venom has held fast as it’s been passed down from writer to writer. As I grew, I got to see Venom grow with me, making the transition from villain to vigilante, back to villain, before finally becoming a hero. In the last few years, my interest in Venom has taken on an academic quality. Through this I have come to the realization that the Venom symbiote is a metaphor for illness. 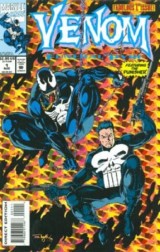 Since its first appearance during the original SECRET WARS, the Venom symbiote—or the ‘black suit’ as it was referred to at the time—has augmented the negative qualities of its various hosts. Not unlike mental illnesses emerging in adolescence or after the use of certain psychoactive recreational drugs. For example, when bound to Spider-Man, its first host, the symbiote made him considerably more irritable. He became prone to alternating fits of depression and rage, and his conduct took on an aggressive nature similar to the criminals he devoted himself to apprehending. It was because of this violent and polarized behavior that Mary Jane convinced Spider-Man to go back to his original blue and red and relinquish the new suit.

READ: For more theory on Spider-Man, check out our piece on ONE MORE DAY

The illness narrative of the Venom symbiote was able to truly develop in the time it spent bonded to Eddie Brock, the first to adopt the ‘Venom’ moniker. Brock provides a wealth of information to dissect in this context. Brock has been plagued with a severe anxiety disorder since childhood. Brock’s mother died in childbirth, and his father never quite forgave him for it, though he was not at fault. It is revealed in VENOM: DARK ORIGIN that as a child, Brock would steal the belongings of other children, and return the “lost” items to gain the approval of his peers. Amidst the biggest failure of his young career as a journalist, Brock learned that he had adrenal cancer. It was shortly after this that he encountered the symbiote. 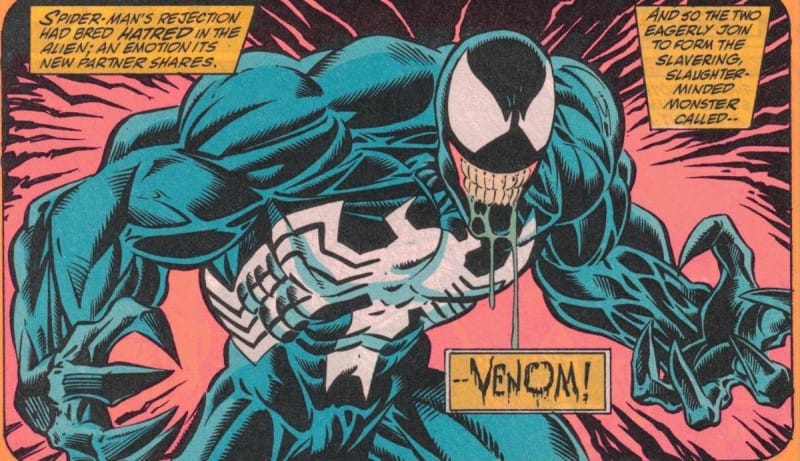 The symbiote provided him with intensely augmented strength and powers reminiscent of Spider-Man’s, in addition to preventing the further spread of his cancer. The power and safety that it provided him proved to be adequate compensation for the violent tendencies that he experienced while in possession of the symbiote. Because the symbiote provided Brock with an improved quality of life, he grew dependent on it.  This is reminiscent of addiction, and, like an addict who has kicked a habit, after his separation from the symbiote, Eddie Brock has continually expressed an intense fear of ever being reunited with it.

LISTEN: For some insight on Spidey’s black suit, check out our podcast on KRAVEN’S LAST HUNT and THE DEATH OF JEAN DEWOLFF

The symbiote’s current host is Peter Parker’s one-time bully and currently decorated war veteran, Flash Thompson. Flash lost both of his legs in Iraq, leaving him confined to a wheelchair. However, as Agent Venom, Flash has use of a pair of legs formed by the symbiote. Flash is the tamest Venom yet, possessing neither the vitriol of Eddie Brock nor the cannibalistic rage of Mac Gargan. This is potentially because of the tranquilizers pumped into the symbiote by the military scientists responsible for the union of Flash and the symbiote. Flash’s Venom has a narrative much more sympathetic to mental illness. Flash suffers from PTSD and alcoholism, two ailments commonly found in combat veterans. This strengthens a claim that holds true over all iterations of Venom: the symbiote is a metaphor for addiction. 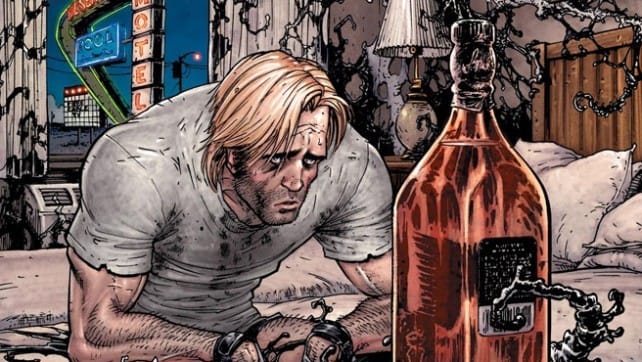 The symbiote forms a set of usable legs for Flash Thompson similar to how it suppressed Brock’s cancer; it remedies the physical restrictions of its host, allowing them to experience a higher quality of life. This allows the host to warm up to the symbiote, submitting their will to it in exchange for fantastic abilities. Each host that has welcomed the symbiote goes through stages of addiction to the power it provides. Flash has thus far been the least susceptible of all of the Venom symbiote’s hosts to the bloodlust it evokes. This could be because of his previous experience with addiction; having tangled with one beast may have provided him with the insight necessary to contend with another. However, because of a reaction between the sedative chemicals forced into the symbiote and Flash’s body chemistry, he is literally unable to survive without being bonded to the symbiote. This means that Flash, while generally in control, has a very real physical dependence on the symbiote. 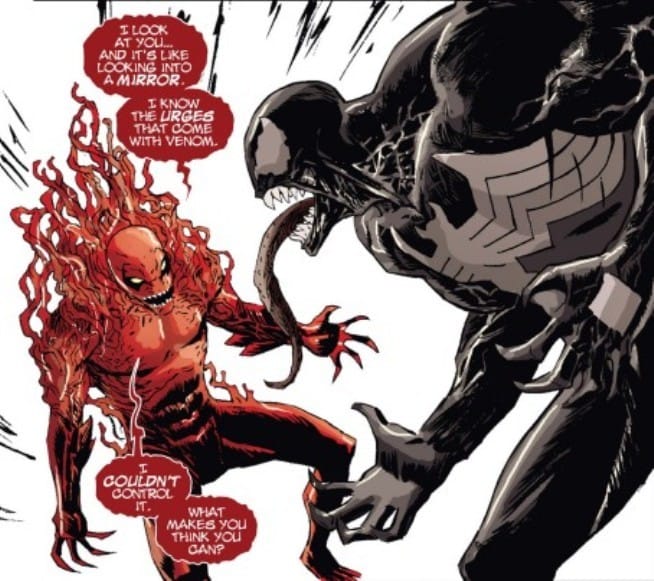 In the Marvel Universe, many heroes and villains alike use the term ‘symbiote, ’as if it were a derogatory word, in reference to the symbiote. In the words of Susan Sontag, “Any important disease whose causality is murky, and for which treatment is ineffectual, tends to be awash in significance. First, the subjects of deepest dread (corruption, decay, pollution, anomie, weakness) are identified with the disease. The disease itself becomes a metaphor. Then, in the name of that disease (that is, using it as a metaphor), that horror is imposed on other things. The disease becomes adjectival.” Venom’s legacy as a destructive force grows with each new host, and each new symbiote that is asexually produced by it and its progeny. Because of its violent history, even as an agent of justice, Venom is viewed as a threat, regardless of the identity of its host. The menacing appearance of the symbiote’s host causes others to treat it, and its host, with extreme prejudice. This again evokes Sontag’s Illness as Metaphor, in which she says, “Nothing is more punitive than to give a disease a meaning – that meaning being invariably a moralistic one.” This speaks to the manner with which America’s legal and healthcare systems approach addiction. The prejudice that addicts face when seeking treatment would lead one to think that their intentions are sinister. They exist within a system that capitalizes on suffering, resulting in treatment generally reserved for criminals rather than victims of a disease. The various hosts to the Venom symbiote are treated as if they become monstrous engines of slaughter of their own volition. However, like addicts, they are functioning while under an influence that more often than not is beyond their control.