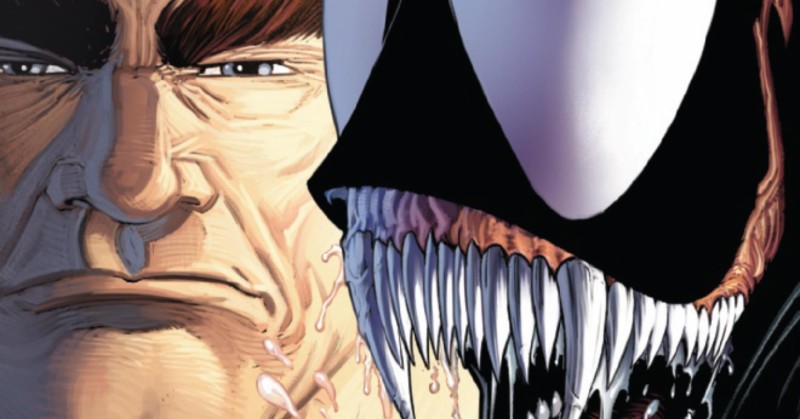 There’s a moment in the film CAPE FEAR where lawyer Sam Bowden pays three men to beat up his client-turned-stalker Max Cady. Cady manages to turn the tide, mockingly calling out as the lawyer cowers in his hiding place. Despite knowing the monster Cady is, it’s hard not to feel a degree of respect for him. What does this have to do with VENOM #6? Because despite knowing the monster the Venom symbiote is, VENOM #6 causes the reader to feel  respect and sympathy.

VENOM #6: The Monster Becomes the Victim

The issue begins as the army puts Eddie Brock on assignment to recapture the symbiote. The new Venom is a former Army Ranger named Lee Price who has been able to dominate the symbiote. Price is attempting to escape capture, but Spider-Man arrives to stop him. This is where the issue starts playing with the reader’s expectations. Lee immediately tries to kill Spidey, while the symbiote tries to stop its host from killing its old enemy. I don’t know about you, but that isn’t what I predicted!

Writer Mike Costa creates a unique dynamic for Venom. The monster that is famous for eating people’s brains wants to leave an abusive host. Yet the symbiote cannot overcome Price’s strong will. Venom has never had such a reversal, but Costa is able to use it well here. Gerardo Sandoval’s gritty art also helps. Sandoval is capable of portray the symbiote as classic Venom or a writhing mass of tentacles. Yet even beyond this, Sandoval still makes Price look frightening with or without the suit.

READ: Did the SPIDER-MAN: HOMECOMING Trailer show too much?

This is especially useful when Brock and Spidey come up with a plan. Spidey says he wants to bond with the symbiote again. Price tries to resist, but the symbiote tortures him with images of his past. Yet even here, we get a twist. Lee’s child self (who killed his abusive parents) begs the symbiote to stay and actually gets the monster to hesitate. Lee’s self-destructive ego ruins that brief moment of sympathy, though, and the symbiote fully rejects its host. It then leaps towards Spider-Man with thoughts of being a hero once again.

Sadly, it is not to be, as Spidey steps aside and Brock captures the symbiote. It’s a moment that twists on the heartstrings; even Spidey says he’s “going to hell for this.” There is the master stroke of this story. The symbiote resists a destructive host and wants to be a hero, yet still just gets denied in the end. Things obviously aren’t over yet, as the issue ends with a bang that’s too good to reveal here, but ensures that Venom is far from done.

READ: Is Venom a metaphor for addiction? We discuss here!

VENOM #6 is a crisscross of an emotional story. It garners sympathy for a monster and makes a beloved hero look like a heel. There’s no way of knowing if the Venom that emerges from all this will be a hero or a villain, but readers will see him justified either way. Regardless of the choices made, however, Spider-Man and Price had best be careful, or they’ll hear a voice calling, “come out, come out, wherever you are.”