VENOM #1 marks the first appearance of the iconic Spider-Man foil after it was separated from its last host, Flash Thompson. Venom last appearanced in VENOM: SPACE KNIGHT and GUARDIANS OF THE GALAXY, where he fit the mold of a hero more closely than Venom ever has before. Judging from the first issue of the new VENOM series, the ‘savior’ will not be a component of Venom’s character any longer. The team of Costa, Sandoval, and Almara seems to be bringing us back to a darker Venom, perhaps darker than any we’ve seen before. 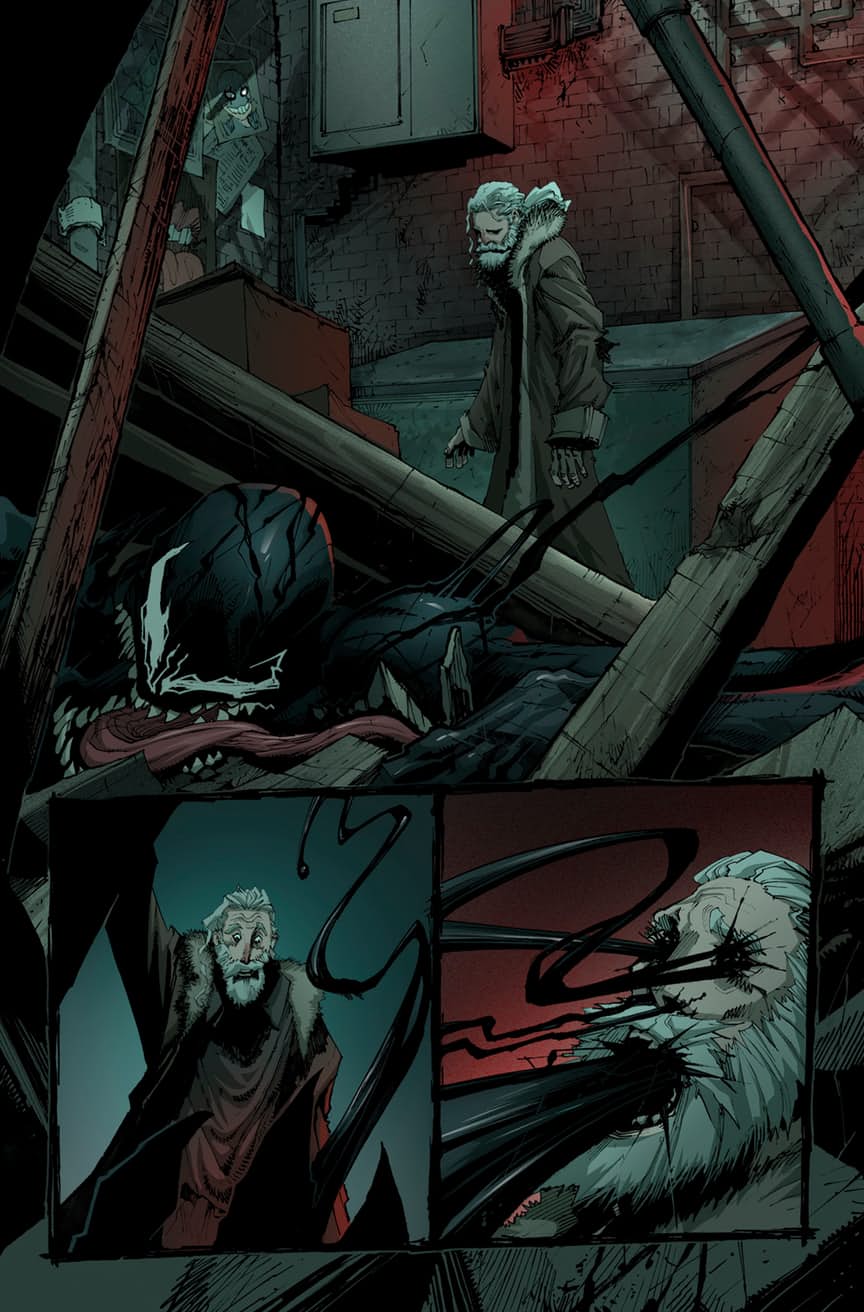 VENOM #1 follows the newest host of the Venom symbiote, Lee Price through the events that culminate with their bonding. The Venom symbiote, as we saw in VENOM: SPACE KNIGHT, has gained the ability to exist without a host. For whatever reason, in VENOM #1, the symbiote’s humanoid form is revealed to be rather sickly, saying, “I’m just looking for a little help.” While a portion of the comic is narrated by the symbiote, the majority of the book follows Lee Price, the eventual new host of the symbiote. Price shows up at a diner to meet a friend about an opportunity to work security at Alchemax as well as at the contact’s “lucrative side business.” At the diner, it is revealed that this contact is none other than Mac Gargan, AKA Scorpion, and a one-time host of the symbiote.

LISTEN: CIVIL WAR II is almost over! See if our predictions were right in our podcast on CIVIL WAR!

That night, Price shows up to work, helping Gargan transport cases of toxic gas. The deal goes sour, and Price finds himself staring down the barrel of a gun. With an unsettling level of composure, Price goads the man to shoot him, clearly apathetic in regards to his own well-being. The symbiote takes this opportunity to detatch itself from a dying homeless man, and save Price from a barrage of bullets, bonding to him in the process. The symbiote then shows Price the history of its recent heroics with Flash and the Guardians of the Galaxy. However, Price will hear none of it, declaring himself in control before thrashing those on the opposing side of the sour deal. Lee Price then murders his friend in order to ensure that no one will learn of his new identity as Venom, before going home to “figure out how to use [his new powers] to [his] advantage.”

The final page of VENOM #1 shows us the pitiful image of a gaunt, sickly symbiote attempting to crawl away from its new host. A task that is proving impossible, given wits apparent inability to maintain a physical form without the assistance of a host body. 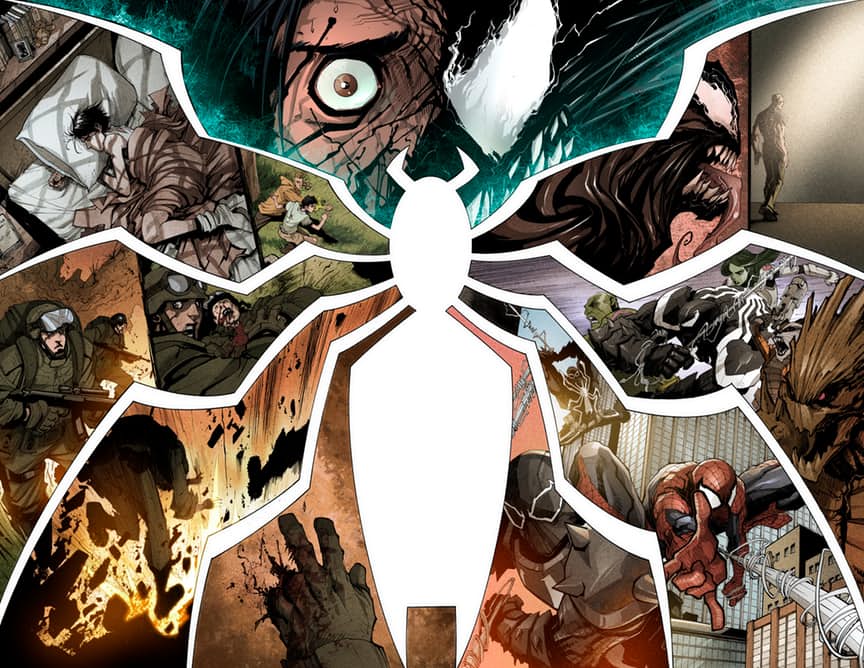 Venom has always been a character defined by inner conflict, and the alignments of its various hosts have contributed to the symbiote’s growth over the last decades. Eddie Brock, despite multiple attempts to murder Peter Parker, became a protector of the innocent, using lethal force to appease the symbiote’s bloodlust. Mac Gargan gave himself up entirely to the symbiote, allowing its animalistic urges to heighten his own villainous tendencies. All of Venom’s past hosts, even Flash (despite the symbiote being pumped full of sedatives), struggled to retain their individuality while bonded to it. Flash had considerably less trouble with the symbiote after it was purified, creating the first Venom that was fully devoted to good. It would seem that Lee Price will be using his newfound abilities to look after himself, regardless of the cost. He has already demonstrated dominance over the Venom symbiote, something none of the its other hosts have been able to accomplish.

READ: Love Venom? Check out our analysis of Venom as a metaphor for addiction!

Though Lee Price was able to kill his childhood friend in cold blood, writer Mike Costa does his best to make the character sympathetic. Not only is Price missing two fingers, but because of this, he is unable to find any work similar to his old position as an army ranger. His status as an orphan, rendered as such by a deadbeat father who abandoned him shortly after a young pyrokinetic mutant accidentally set fire to his and Price’s childhood building, killing the latter’s mother. Mike Costa, whose SCARLET SPIDERS #1 forever revolutionized the standards to which I hold comics, gives VENOM a solid foundation on which to grow. The dual narrative structure solidifies early on that Lee Price and the Venom symbiote are two separate beings, a crucial piece of information for incoming readers. Costa is giving us a Venom the likes of which have not been seen before. It’s dark and gory, yes, but the symbiote is in possession of a newly awakened drive to do good, pitting it against its new host in a very different way than readers have seen in the character’s thirty-odd years in the Marvel Universe. As such, I’m much more interested to watch Costa further develop the Venom symbiote than I am to see what he does with Price. The latter is not a stock character, by any means, but he lacks the sense of responsibility that drew me to follow Venom after picking up FUNERAL PYRE at a garage sale as a young child. While past iterations of Venom have focused predominantly on the host, I believe Costa will split his attention equally between host and symbiote, if not devoting more time to the latter.

READ: YOUNG JUSTICE is coming back for a third season! In celebration, we analyzed Miss Martian and Artemis!

Costa establishes the emotional and desperate narrative of the symbiote, and how it clashes with Price’s nearly sociopathic apathy. Piggybacking off of this, Gerardo Sandoval delivers an environment characterized by fraught linework and heavy inking. It would appear that we’re done with Venom’s alternate appearances for good. Of course, I’m not losing any sleep over Venom’s horrendous spaceman-esque redesign from a couple of years ago, especially because Venom’s appearance has finally returned to how it is supposed to be: huge, toothy, and monstrous. I have no complaints regarding Sandoval’s artwork, and omitting discussion should not be taken as such. Sandoval is most deserving of praise for his rendition of Venom. He expertly captures the undulating, organic texture of the character, and as such accounts for Venom’s malleability, which is most visible when changing forms. Sandoval’s work with Venom has been and continues to be of the highest caliber. 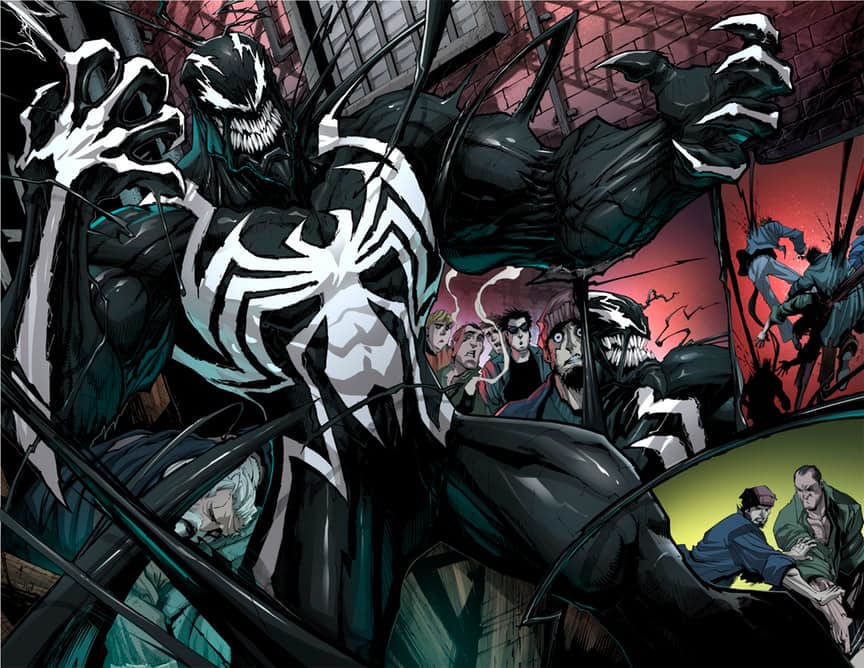 The colors provided by Dono Sànchez Almara serve to cement the comic’s dark tone, the groundwork for which is laid by Costa and Sandoval. Almara’s backgrounds are characterized by bleak, splotchy colors that draw the reader’s eye to the figures in the panel. Almara makes a clear distinction between flashback and the present by coloring the former with washed out colors that contrast heavily with the saturation seen in the latter.

While I was initially outraged at the nature of the new host, given that the symbiote had grown so much while partnered with Flash Thompson, I now view the new partnership as an opportunity for growth. Will the Venom symbiote revert back to its old ways, giving in to Price’s self-serving ways? Or will it overpower Price and either compel him to do good, or leave in search of an entirely new host? Only time will tell!