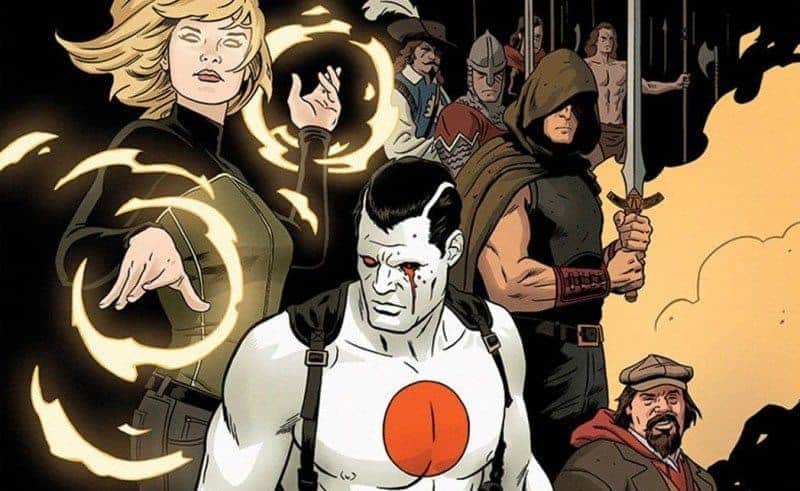 Valiant released some big news this week. In December, a four issue world builder, The Valiant is coming by some of the best talent in comics! It will be co-written by Jeff Lemire (Justice League Unlimited, Animal Man, Sweet Tooth) and Matt Kindt (Rai, Unity) with art by Daredevil‘s Paolo Rivera.” An entirely self-contained comics event spotlighting Bloodshot, Eternal Warrior, Geomancer, and a cast of heroes and villains from across the Valiant Universe.” To celebrate the announcement, Valiant is offering a good selection of their first issues for free on comiXology this month including the critically acclaimed Rai and Unity. The Valiant Universe is just beginning, entering its third year, with its staggered series releases and content driven works- I recommend sampling what the Universe has to offer before December, you will be glad you did.

There have been many anniversary celebrations lately in comics: Batman’s 75th, Ninja Turtles’ 30th, Detective Comics 900…but nowadays, even reaching issue 25 is a feat in itself. Valiant Entertainment, the phoenix that rose from the ashes, is celebrating its staying power. X-O Manowar got a special 25th issue in May and next on the block is Harbinger 25, out today. Labeled an “anniversary spectacular”, issue 25 is 48 pages with six new stories, a pin up, and a cover gallery. 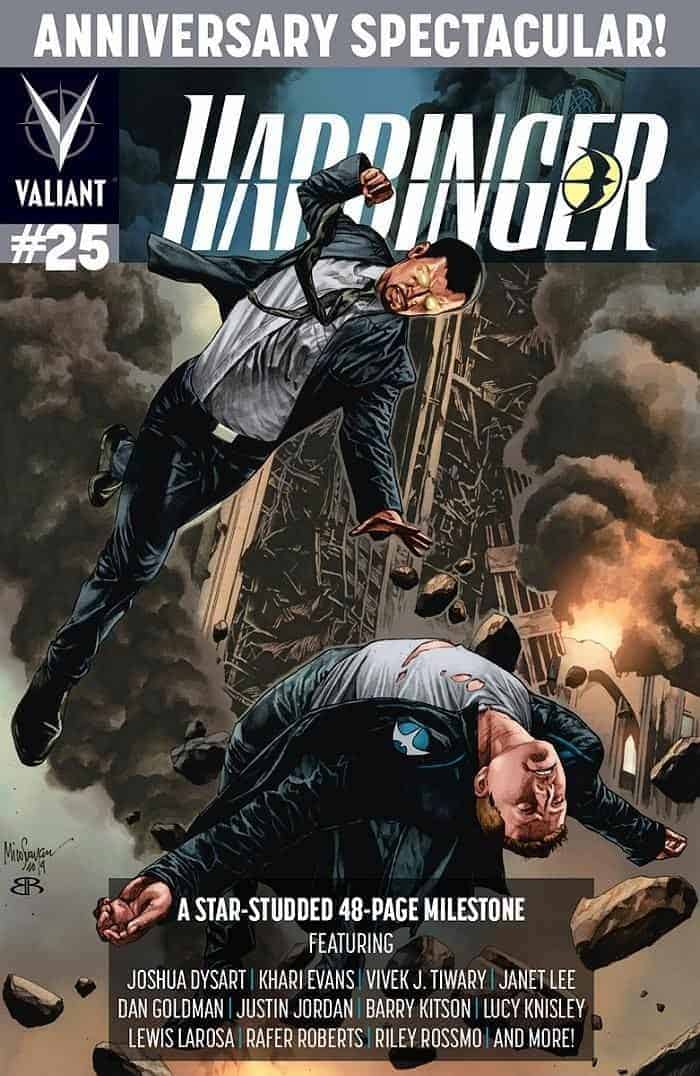 “The Origin of Harbinger” by Joshua Dysart, Lewis LaRosa, and Romulo Fajardo is a great one page,5 panel primer to get a crash course in the series. This, along with the standard last issue recap leading into “Wake, Part II” should be enough to introduce new readers into the chaotic world of Harbinger…the supplementary stories are what makes the new readers stick around.

“Wake, Part II” by series regulars Joshua Dysart, Khari Evans, and Brian Reber, is the final part in the Death of the Renegade storyline that has put the protagonists, and the audience, through the ringer. This story was missing the character labels, showing their names and power set. That might confuse new readers as we have lots of super powered psiots doing things in the issue that left even a longtime reader of the series saying “who is he again?”

The main purpose of this story was to set up the next chapter: Harbinger: Omegas. “New lines of power are being drawn”. The Renegades were not as present as I would have liked in the part of “chapter one”, but their return will be that much more exciting.

Peter’s story really comes full circle to the first few issues. In “Wake”, “Into Memory”, and “Cold Brains” (Dan Goldman and Clayton Henry) we are reminded of the dynamics that started out the series. “Into Memory” was filled with beautiful art and a touching story by the team of Vivek Tiwary, Lewis LaRosa, Brian Reber and Dave Lanphear.

“Fan Fiction” is a fun, upbeat car ride story featuring the renegades. Rafer Roberts art is a call to zines, vastly different from any superhero art of today. “A Hero’s Mission” written and drawn by Lucy Knisley is Beautiful, illustrative art, and most of all, fun. These stories really showcase the essence of the Renegades remnant, in a drama free, “get to know us” kind of way. The art in these two stories is daringly different, proving that Valiant can and will take risks.

The supplemental pinup and cover gallery were added bonuses to the already packed issue, but I do think it lacked a bit of text. Text retrospectives are not bad, and can be really valuable in special issues to connect with readers and reflect on the journey of the characters. I’m a sucker for character profiles, but Valiant does have their own handbook out on the shelves, hopefully readily available.

This issue’s focuses seemed a bit off to me. As I am still dealing with the death of one of the Renegades, I would prefer a story featuring that character, rather than two about a character from 25 issues ago. The cover gallery is overwhelmingly the Harbinger stories from 90’s Valiant…which is different from this universe/take. Again, text could easily describe that and if I was a new reader, I might be confused.

Harbinger has been a consistently great series and this issue samples a lot of that mojo. It may be the end of Harbinger chapter one but next month brings us not one but TWO Harbinger miniseries with more world building and character driven stories.

I highly recommend this issue to try out the series. If you like it, you have plenty of time to check out the trades before Chapter 2 fully starts! 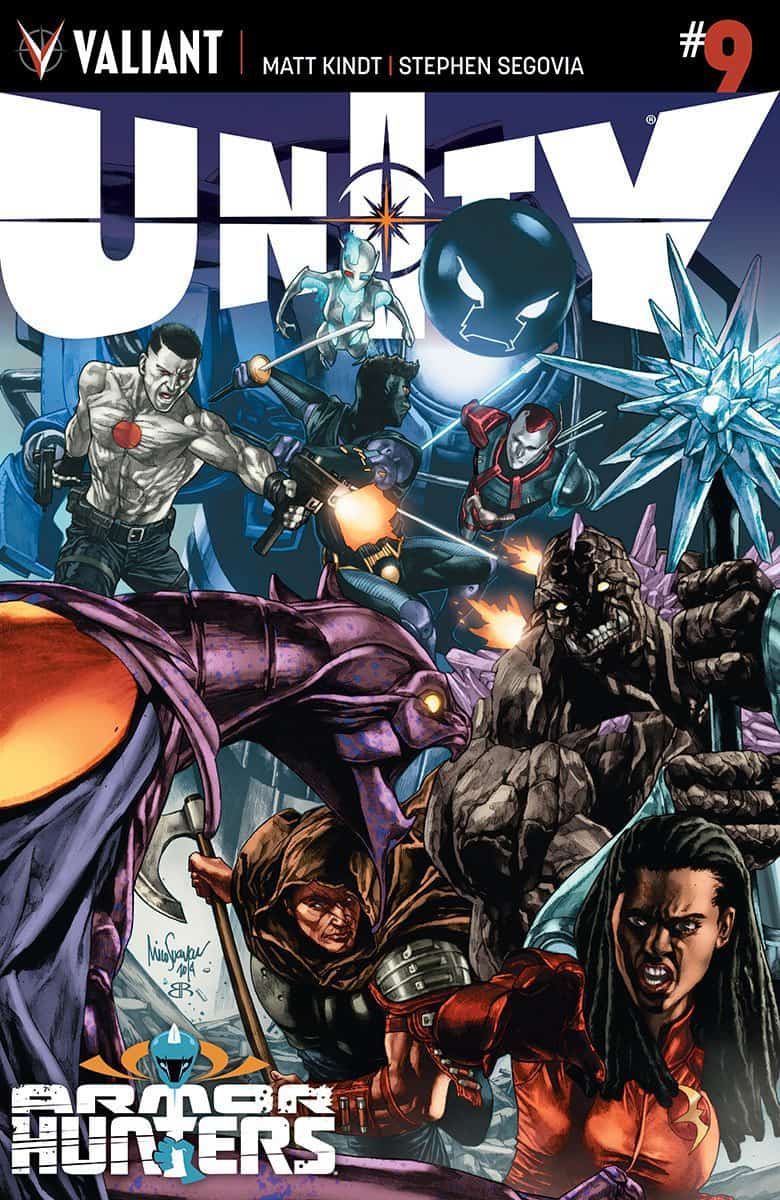 Unity issue 9 takes place knee deep in the Armor Hunters crossover. The narrative is strong as always, this time with Livewire taking the main stage after a brief leave of absence. While Ninjak and Eternal Warrior are fighting the monsters springing up in major cities across the world, newcomer Bloodshot is getting acquainted with the situation. It was the classic “hold of the invaders, defend the base” story and really felt like rising action in the Armor Hunters crossover. The story might not stand well enough by itself when separated from the crossover.

This untitled story does not feel like a part of the action, more on the outskirts. The Armor Hunters were barely mentioned, X-O is not present, Ninjak and Eternal Warrior had some disjointed flashbacks but that was it…Sure, in team books, the teams are often split up- it can make for a good story. But this issue offered no recap. Ninjak and Eternal Warrior were left on a cliffhanger last issue, which was not touched upon in this issue, instead resolved over in Armor Hunters issue 2. Bloodshot, also introduced in Armor Hunters 2, just kind of appeared in this issue, without much explanation aside from a prominent spot on the cover. Unity should stand alone a bit better- and it has all the tools to! Matt Kindt’s writing and Stephen Segovia’s art have been stellar in this run. The character choices are strong, contrasting, and always compelling. Now, with Bloodshot migrating over to this book, the dynamic will be churned and the stakes will be even higher. Do not give up on this title, this issue might have been a bit slower than others, but I know it will have an explosive return to force very soon! This issue is a good part of the overall story, but not so essential to the casual fan.