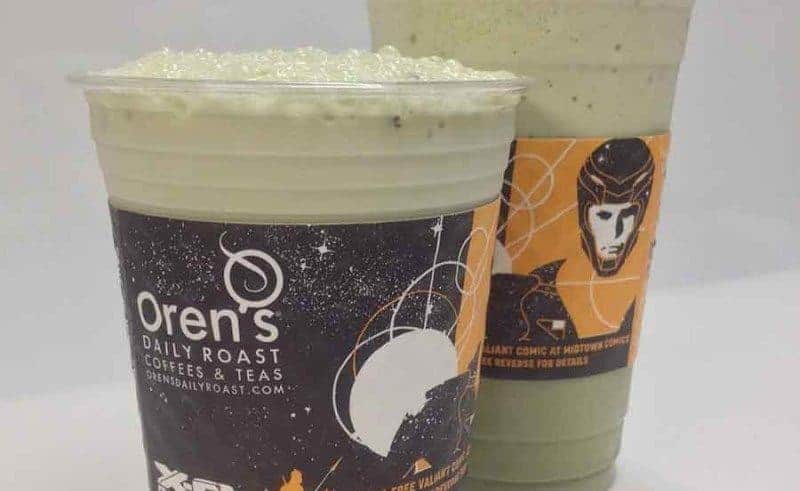 The signs of summer: heat, ice cream, iced anything really, and comics? Summers have been synonymous with Valiant since its revival in 2012. And this summer, Valiant Entertainment is using their flagship character, a time displaced Visigoth, powered by alien X-O Manowar armor, to promote their new partnership with Midtown Comics and Oren’s Daily Roast, both of New York. First, go to any of the ten Oren’s locations and order the “X-O Manowar Green Tea Blast” to cool you down and recharge you. Then, bring the “Java Jacket” to any of the three Midtown Comics locations to get a free Valiant comic through 9/30 (While supplies last). Return to Oren’s with any Valiant comic, show them at the counter, and get 10% off your order! Synergy in motion.

The rollout was celebrated at Oren’s Times Square location. The small coffee shop was packed with fans, press, even some of the Valiant creative talent showed up to try out the new drink; boy was it a hot day in New York. Owen’s employees behind the counter sported their favorite Valiant tees (some in great 8-bit style available at their official store here). The TVs showed a great trailer of the current events going on in the Valiant Universe right now and X-O Manowar was plastered all over the walls and window dressing.

The free comic from Midtown is a copy of Must Read Valiant, a celebration of five of their best stories from their 1st year. Must Read Valiant was released in January of this year. A second edition is in the works to reflect on their successful second year. Valiant Entertainment is in their third year as a publisher now and plan to take a slow and steady pace to not lose any steam. They are committed to releasing no more than nine monthly titles to focus on the storytelling, quality and consistency.

Valiant famously had Armstrong Brew, their own beer, back in the 90s but new liquor laws makes transport across state lines much more difficult today. Valiant’s President of Consumer Products, Promotions and Ad Sales, Russ Brown, ran marketing for Marvel back in the day and was responsible for Hulk Hands. “Casual dining brings something different to the table,” he explains. “With the major marquee locations of both Oren’s and Midtown just two blocks from one another in the heart of Times Square, this a perfect opportunity to bring even more new fans of X-O Manowar and the entire Valiant Universe into the fold.”

Valiant’s target audience has always been fans of the original, current comic readers, and lapse fans who might remember reading the 90s comics but fell off the wagon. Putting a poster of X-O Manowar, a prolific product of the 90s, in a storefront in Times Square is one way to remind old readers that Valiant is back and stronger than ever.

The promotion, hopefully the first of many, is New York celebration between three independent New York staples. Midtown Comics was a devout supporter of Valiant’s resurgence back in 2012. As for the coffee connection: Cody Robison, now Social Media Director for Oren’s, sent a fan video to Valiant offices last year. He bears an uncanny resemblance to Armstrong (of Archer and Armstrong). Being a big fan, he gave his best Armstrong impression and was quickly invited to the studios for a visit. Speaking with Russ Brown, he revealed his day job as a barista at Oren’s and ideas began to percolate on how to make a promotion happen between the two. They had originally planned on a Louisiana fresh beverage based on Shadowman but that was changed in favor of the frozen green tea and vanilla blend, perfect to cool down during the summer and a visually striking green that matches X-O’s blaster ray.

While this promotional event is strictly NYC oriented, but do not fret, Valiant is planning several special promotions a year, “surprising stuff”; be on the lookout for what they rollout in celebration of New York Comic Con this October. The company, again lead by a masterful Russ, designed the uniforms and sponsored the USA Men’s ice luge team at this year’s Winter Olympics. If you find yourself in New York this summer, be sure to try some take advantage of this summer special. As for more food items: a Ninjak beverage (and comic series, at that) could not be confirmed but I suggested Quantum and Woody’s Goat Chips.

As for how the drink tastes? The overwhelming review was that it tasted like ice cream with a hint of green tea. Recommended.