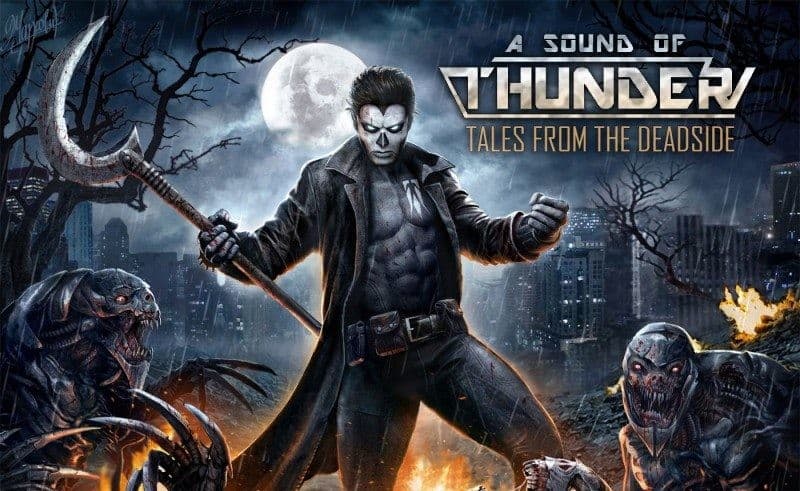 I was eleven years old when I watched The Who’s Tommy for the first time. I really probably should not have been watching that movie at that age, but it happened, and I was enamored with the idea of the Rock Opera. I sought out the ones I knew about. The Who Sell Out, Quadophenia, and The Wall instilled a long running interest in rock operas, concept albums, and generally music that told a story. When I heard about A Sound of Thunder’s new album, Tales from the Deadside, I was so hyped. Luckily, they delivered on a great album as well as a unique adaptation of the Valiant source material!

A Sound of Thunder made this album over the last year in collaboration with Valiant and a successful Kickstarter campaign. Per the band’s guitarist Josh Schwartz (and Valiant), Tales from the Deadside tells “…[t]he story of Shadowman, his alter-ego Jack Boniface, and the many characters in his world inspired us to create what we believe is our best album to date… [w]e let the story lead us to places our music has never been before, combining all the elements of supernatural horror, drama, action and adventure found in the comics. Of course, everything has gone through our own unique Thunderous filter, and all the familiar ASOT elements will be there. Shadowman’s harrowing journey demanded no less!”

I’d never heard of the band, but I dove right into the album. I should also note that I am not very familiar with Shadowman either. The most I know about the character comes from my research regarding his nemesis, Master Darque. His recent appearances in Valiant’s very popular BOOK OF DEATH crossover piqued my interest, as did the upcoming return of Shadowman to the Valiant Universe. According to the recent solicits, Shadowman and the Deadside will appear in NINJAK, which should prove for a very interesting pairing of divergent characters. I’m quite pleased with the experience. I found a metal band with great vocals, a concept album about an interesting character, and a wealth of comics to read to get the full experience.

LOOK at my latest review of Valiant’s stunning crossover BOOK OF DEATH!

Through Tales from the Deadside, Wikipedia research, and information from my father (long time comic collector), I gained a working knowledge of Shadowman. The album tells a story that seemed very similar to the relaunched Shadowman’s story. Jack Boniface, real name, is the titular Shadowman, and he protects the barrier between our world and the “Deadside,” a realm full of evil and dark forces trying to get into Earth through New Orleans. Again, we can see Master Darque in BOOK OF DEATH, though Shadowman has been absent since his series concluded in 2014. Tales from the Deadside, along with BOOK OF DEATH, are only the first part of bringing back one of Valiant’s most popular characters. He even had two successful video games, the first of which is available on my favorite games site GOG.

I’m not a big follower of metal, though I would compare A Sound of Thunder’s, well, sound, favorably to The Sword, Internet darling The Protomen, or similar high concept-friendly bands. Clear vocals, dynamic guitar, and a strong sense of album coherence (very important in a concept album) are apparent in their work. The album tells the story of Shadowman’s origin, from his father’s (the previous Shadowman) death to Jack’s inheritance of his powers to his first confrontation with the Deadside. I would describe this as progressive metal. They utilize multiple muscle influences throughout the album, though a heavy driving guitar is omnipresent. The sprawling “Deadside” is most evocative of these traits, though I find the driving metal guitar behind “Tower of Souls” to be the high point of the album. “Punk Mambo” has, naturally, punk influences and I can only imagine it would be wildly fun in concert, with its smooth sax interludes. A lot of saxophone in general; musical variety is again something I love on metal albums, though my fondness for saxophone is likely due to the fact that I used to play one for many years.

The only aspect of the album I wasn’t crazy about was the narration between (and occasionally within) songs. It was certainly effective but I felt that it removed some of the flow from the otherwise very concise album. If you have never read Shadowman (like me), I highly recommend you give this album a shot and pick up the Shadowman comics before he returns in NINJAK this fall. Valiant’s multimedia efforts are only going to multiply from here on out, with several films planned and one of the most popular crossovers of the year emphasizing the stellar growth of the company. Check out the band on Soundcloud, Spotify, and pick up this album today!

CHECK OUT MORE FROM ALEX!