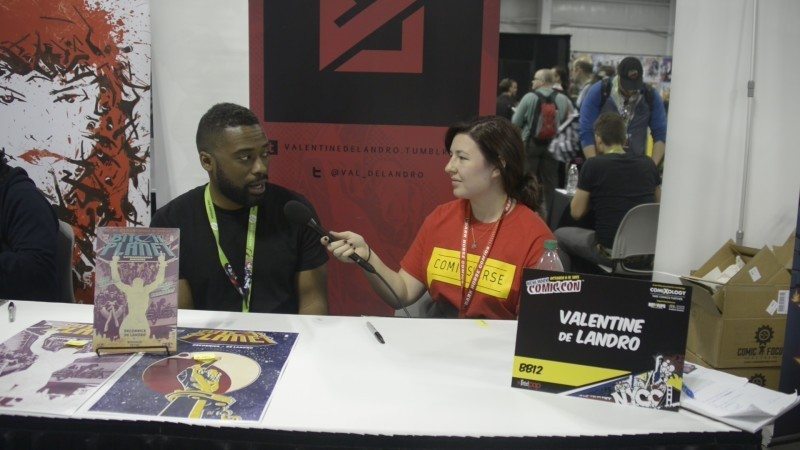 When I first looked at the list of people that were going to be present this year at New York Comic-Con, I immediately wanted to conduct a Valentine De Landro interview. Valentine is the artist of BITCH PLANET written by Kelly Sue DeConnick.

READ: Love Image? Check out our review of another amazing series, ODY-C!

Even though I had very recently spoken to him at Special Edition: NYCC, I had to ask him about the fact that a month or so ago the first arc of BITCH PLANET finally ended and ripped out my, and many other fans, hearts with a powerful loss. De Landro, who gave me a figurative shoulder to cry on in the moments right before the camera started recording, told us all about the reasoning behind this decision as well as gave us a lot of awesome and exclusive information about the upcoming arc of BITCH PLANET, which focuses on a mysterious new group and takes us to a new cell block.

Want to catch up on BITCH PLANET? Want to know why it’s so awesome? Listen to our podcast on it right now!

He also took some time to talk to us about his amazing art style, which really lends itself to the subject matter of the book and gave us more than a few insights into why he believes that representation in comics is important, and why he and Deconnick feel that they should never pander or force preachy statements about diversity into their work.

Overall, this Valentine De Landro interview was amazing as usual, and it made me feel very lucky to get a chance to speak with him and read that he clearly approaches with a large amount of respect and care. So, if you haven’t checked out BITCH PLANET yet you probably should, but be mindful of this interview because there are definitely spoilers a plenty!