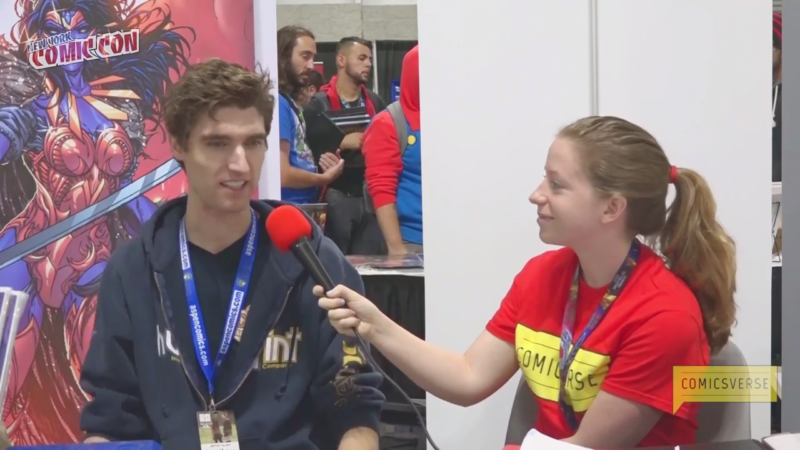 New York Comic Con 2016 was brimming with passionate creators and fans of comics. ComicsVerse had the pleasure of talking to V Ken Marion. Mr. Marion is a talented artist who is making a name for himself in the industry.

V Ken Marion is the noteworthy artist for DC’s BLOODLINES. A six-issue miniseries rebooting the 1993 comics by the same name, BLOODLINES follows the stories of several characters living in a small town who seem to gain powers. The comic takes on a darker tone as it depicts the dramatic events that unfold after a meteor brings with it an alien presence. This reboot combines the superhero genre with horror and science-fiction to appeal both to 90s nostalgia and to create something new.

First, in the interview, Marion explained how he had always wanted to draw comics since he was a little kid and how he turned his dream into a reality. He subsequently revealed which artists and comics inspired him to pursue his career. Then, Marion described how he and J. T. Krul collaborated on BLOODLINES and how the two first met. He complimented Krul for his ability to make relatable and diverse characters. Finally, for Marion’s part, he went into detail about his artistic process, from receiving the script to the finished project. With all the work that goes into it, creating a single page in a comic can take Marion from eight to fourteen hours! The hardest part for him is drawing machinery that has tricky perspective, like cars and planes, and, of course, working to meet deadlines! Thankfully, Marion loves his job!

Make sure to follow V Ken Marion as he continues to add to his already impressive portfolio. If you haven’t yet read BLOODLINES or his latest work on GREEN LANTERN, then be sure to take a look!

In conclusion, what did you think of our interview? Let us know in the comments below!