In a world of alternative facts and fake news, I understand if you’re wary. In fact, I will say, this isn’t canon. But once literature enters the public sphere, it’s open for critique, praise, and most importantly, interpretation. I’m referring to V FOR VENDETTA, the amazing comic by Alan Moore and David Lloyd and the ambiguity allowed in its reading. There are certain things we simply never know in V. That’s the point. They are for our minds to fill-in, like the gutter in between panels. And I believe V is a trans-woman. This interpretation not only means a lot to me, and it’s an important theory to consider.

V’s image (or perhaps, the image of the Guy Fawkes mask) has been co-opted by various political groups and internet subcultures, some of which are very toxic. They can be racist and sexist and then some. We need to take back the symbol of V from the internet dredges of 4chan and the like. In the 1982 comic and 2006 movie, V’s main goal is the destruction of fascism. However, it’s hard to miss that he wants to destroy this government in part because of its disgusting civil rights abuses. He is a vigilante for all forms of justice: social, political, religious, etc. He wore a mask because he wanted to be a stand-in for anybody. And so whether V himself is a trans-woman or not, he would not have a problem with this theory. And neither should you.

Whew. Now that that’s out-of-the-way, why do I think V is trans?

LISTEN: Want to know other thoughts on V FOR VENDETTA? Check out the ComicsVerse Podcast episode #78!

V FOR VENDETTA tells us that V was one of the prisoners at Larkhill Resettlement Camp before he became the masked vigilante we all know and love. It’s also a fact that Larkhill housed people who the British regime did not see as “acceptable,” such as queer men and women, Jews, and other religious and political minorities. It would have also obviously included transgender people, though they aren’t directly mentioned. Also, the story is canonically set in the 1990s. Transgender people certainly existed then and well before this time. It is not a reach to say many trans-people were killed or imprisoned in Norsefire’s regime.

My specific fan theory rides on the fact that V, or Prisoner Five, as they were known as then, arrived at Larkhill as a woman. Being trans, of course, made her an obvious target. Though all the guards and doctors at Larkhill refer to Prisoner Five as a man and use he/him pronouns, this doesn’t phase me. Would an extremely anti-gay, anti-trans group of doctors even think to use someone’s preferred pronouns? Not for a second. They would rely on her “biological” sex as an indication of what her gender was. 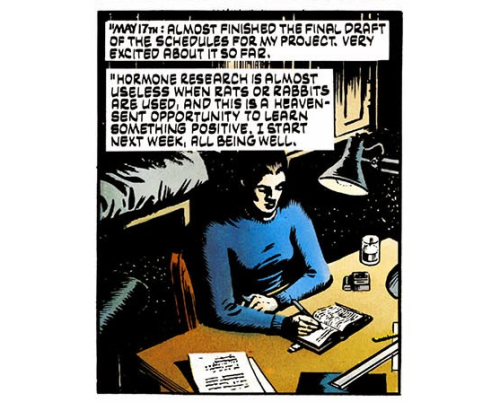 Look at the panel above. In Dr. Delia Surridge’s journal, she writes about hormone research at Larkhill. And now, she has “a heaven-sent opportunity to learn something positive.” That opportunity is Prisoner Five, who she’s going to transition back to a man — forcibly. We know she succeeds because the silhouette of Prisoner Five in the fires of Larkhill is clearly that of a man. We always knew Prisoner Five’s time at Larkhill was disturbing. Now, we see exactly why. Just like watching THE SIXTH SENSE and knowing the twist sheds a different light on the movie, reading V FOR VENDETTA while assuming V is transgender does the same. You don’t even need to use your imagination to think about the terrible things that happen to trans-people. It’s here and it’s real. Conversion therapy exists and is widely practiced in America. 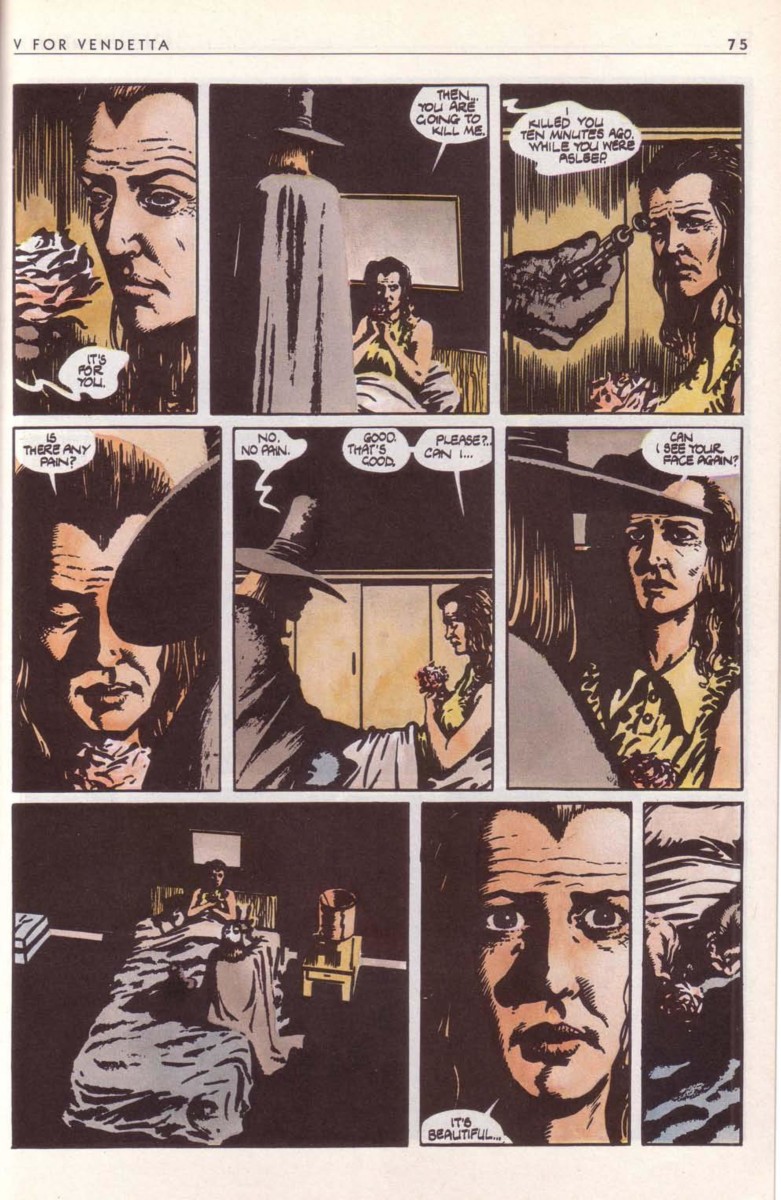 There is also Delia’s strange reaction to V the night he comes to kill her. Instead of asking for mercy, she asks to see V’s face. Why? Maybe she knows something about V that the reader does not. Maybe Delia knows what she had done to V through forced transitioning and wanted to see Prisoner Five’s face one last time. Notice she says that V is “beautiful,” a specifically feminine compliment.

LISTEN: Want more Alan Moore? Then check out our podcast on the origins of SWAMP-THING!

V imprisons Evey in a simulated Larkhill to force her to wake up. He cuts her hair, shaves her head, and gives Evey a sack for her clothes. V strips her of any recognizable femininity. He is attempting to mirror what happened to him at Larkhill, so why not also put Evey through this gendered humiliation? After she exits Larkhill, imbued with V’s experience and knowledge, Evey becomes a gender anarchist. The evidence: when we first see Evey in the comic, she’s very stereotypically female. She wears makeup, has long hair, and dresses in feminine clothing such as dresses or skirts. After the simulated Larkhill, we never see her dressed the same again. Instead, at the end of the novel, she’s practically androgynous. Her hair is shorter and her clothes are gender-neutral. This is part of the knowledge that V wanted to give her: gender is a construct. 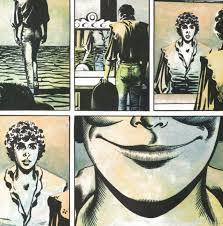 When V is dying, he says, “you must discover whose face lies behind the mask, but you must never know my face.” As most people interpret this, V is telling Evey that she must recognize that anyone can become V and taking off his mask would ruin the symbolic importance.

But, let’s look at this differently. Evey “must never know [V’s] face.” Why? Evey has already done so much to prove herself worthy of V’s mantle. Would seeing who V really is deter her from her goals, or make her forget what she has learned? No. V doesn’t want her to see him because his face is not who he really is. His face is a man‘s face, albeit a severely burned man’s face. V is a woman. She’s not some monster that hateful people created out of fear. He doesn’t want Evey to know him as he was then, but to remember him as he is now — as something more. 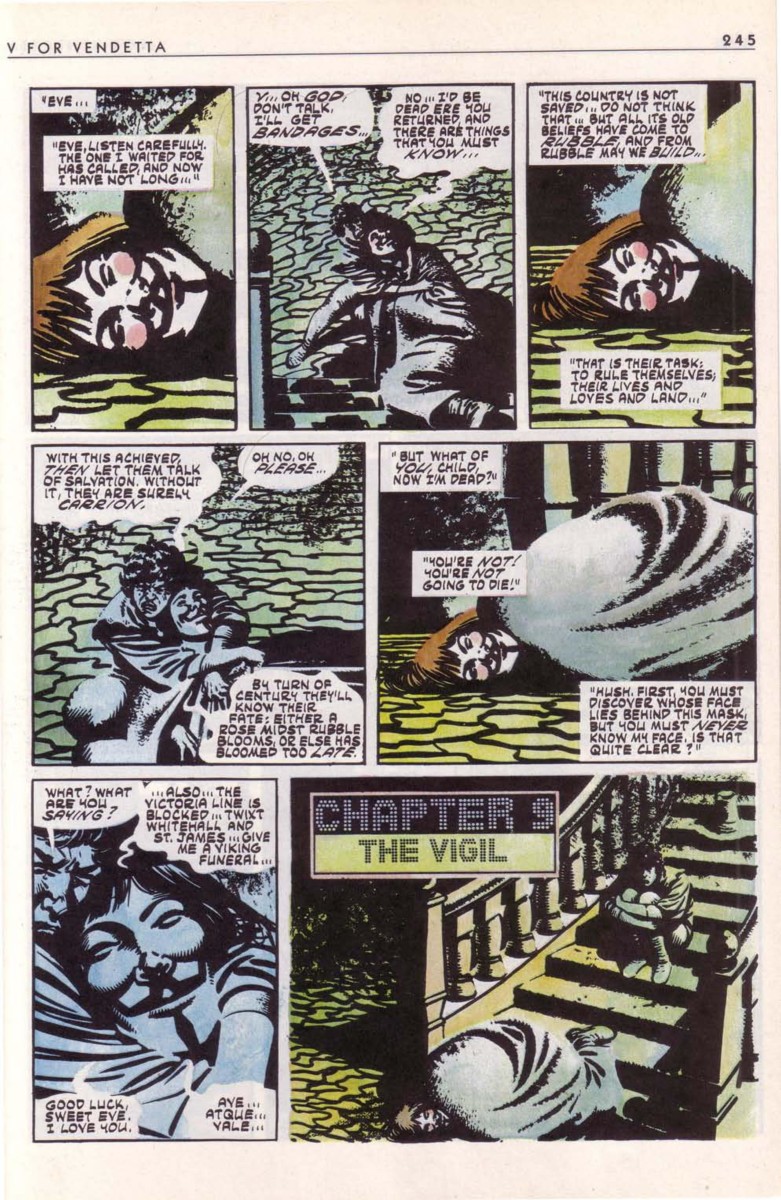 READ: Want a pro-transgender comic that is a bit more lighthearted? Meet Julia Kaye in our exclusive interview!

While I’m writing this, a Guy Fawkes mask signed by David Lloyd watches over me. My copy of V FOR VENDETTA sits, rugged with wear and tear, on my bookshelf at home. It’s important to know that when you create a character, they exist somewhere you cannot go. They become a symbol, a story — a warning. For me, that’s V. Not the hacker group Anonymous but the woman who never stopped doing what was right, no matter what it took.

I’m not saying you have to take my word as fact, though I hope I convinced you to look at the comic a little closer. But wouldn’t it be wonderful if during the Occupy Wall Street Protests, the Ferguson Protests, the Women’s March on Washington, those masks were of someone society has pushed to the corners? My V is fighting the battle at the front lines. Instead of how most people see her, or even the real life Guy Fawkes, my V is someone who society has never given a chance. Still, she knows it has the potential to become something great.