Meet Purgatory Squadron – a ragtag group of pilots saved from court-martial and given one last chance.  But, though they don’t know it, the fate of the Earth rests upon their shoulders…

It begins with the Wall.  A weird, pitch-black substance that’s suddenly appeared in the Solar System, Earth’s military are fascinated and disturbed by this monstrously enormous presence, that seems to cut the Solar System in two.  Purgatory Squadron, a group of pilots who are being given a second chance, are in the front lines; their recklessness has already caused irreparable damage to Saturn’s rings, but when one of them flies into the Wall he kick-starts events that could lead to the destruction of the Earth.  Because the Wall is a weapon, and its use heralds the start of Universal War 1.  By the time UNIVERSAL WAR 1 has ended, we’ll have travelled through time and space, visiting the furthest reaches of the Milky Way and risking the destruction of the entire time-space continuum!

CHECK OUT OUR REVIEW OF BOY-1 #1, ANOTHER SCI-FI COMIC CLASSIC OF OUR TIME!

As a fan of science-fiction, I’m always fascinated by the world-building that is necessary to establish a truly powerful science-fiction series.  And UNIVERSAL WAR 1 is practically a masterclass in world-building.  Each section begins with a flashback sequence that establishes the history of one of the Purgatory Squadron members, while other narrative techniques – including a moment when Purgatory Squadron are reading a propaganda booklet – are used to flesh the world out further.  I love the depth of thought to Benis Bajram’s creation, with a consistent management of science-fiction theory (for example, discussion about the risk of temporal paradoxes, or the sophisticated technology behind the Wall).  It’s clear that every aspect of this world was carefully-crafted, none of it left to chance or developing by accident.

The central plot is fascinating, spinning us through time and space in ways that make total narrative sense.  In my view, there are few mainstream comics and novels that truly play with the concepts of temporal paradoxes; in the world of “Doctor Who”, for example, the novel VANDERDEKEN’S CHILDREN stands head-and-shoulders above all others.  UNIVERSAL WAR 1 is a close contender, weaving character-driven plots and temporal mechanics into one seamlessly entertaining experience.  By the time you’re on the third and fourth sections of the graphic novel, you’ll find yourself mentally revisiting the events you’ve seen before, amused that you didn’t spot the gaps in the narrative that time-travel slots into.

My one quibble is the almost-literal deus ex machina ending of UNIVERSAL WAR 1, but in all honesty that’s signposted throughout the book by the use of Scriptural ‘quotations’.  These quotations begin as almost word-for-word quotes from the Christian Bible, but the odd word-shifts stand out and make you wonder what’s going on.  As they move on, though, the quotes become far more radical, and signpost the direction UNIVERSAL WAR 1 is heading, a fascinating narrative technique.  I was left very impressed at how that was done.

Purgatory Squadron are a fantastic bunch, and the flashbacks are used to give them a real sense of character and history.  Unfortunately, that does mean that a handful of the characters are a tad one-dimensional before you get to their backstories, but that simply makes the comic merit a reread – upon reread, you find that you understand those characters and their motivations far better.  That isn’t to say that there are no mis-steps; as someone who has a history of depression, I found Kalish’s suicidal depression to be badly-managed, and the method used to jolt him out of it was frankly irritating.  By the end of the story, I’m not entirely convinced as regards Mario’s character journey, but I will warrant that the seeds of what he’ll become are shown.  I’ll leave readers to make their own judgements about that.

In terms of art, UNIVERSAL WAR 1 is rather entertaining.  At first, I found the artistic style to not quite be to my taste; however, as I read on, I found that it perfectly suits the themes and styles of the book.  After all, this book shifts from carefully-rendered facial expressions through to glimpses of worlds shattered by wormholes!  It’s understandably a real artistic challenge, but Bajram lives up to the demands of the scripts, producing something that’s truly memorable. 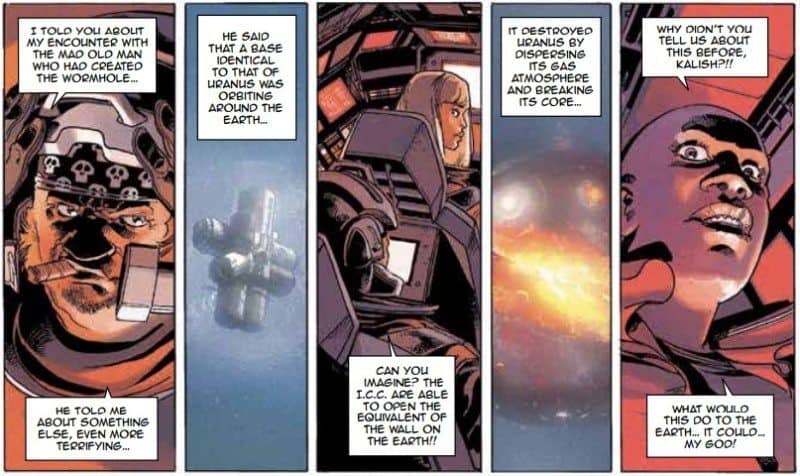 I definitely recommend that fans of science-fiction give UNIVERSAL WAR 1 a chance.  It’s sophisticated world-building, combined with pretty deep characterisation, means that this is a fresh and entertaining science-fiction experience.