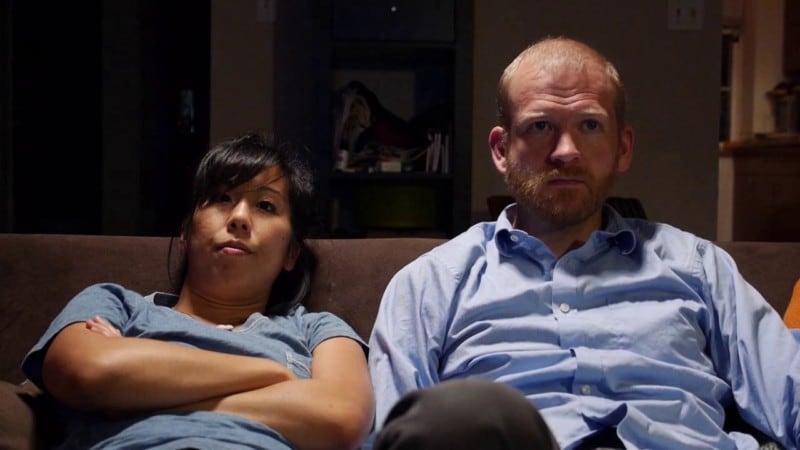 Earlier this year, ComicsVerse sat down with Becky Yamamoto, writer and star of the surprise hit web series, “Uninspired.” The comedic series is about a young woman named Sarah, who wanders through life a bit aimlessly.

Much of the comedy comes from Sarah’s random encounters with oddball characters all around New York City, who guide her in strange yet exciting directions.

The second season recently premiered on Youtube, and Becky gave us lots of juicy details about the origins of the show, the new season, and the things that “inspire” her writing.

ComicsVerse: Can you give our readers a breakdown of “Uninspired” in your own words?

Becky Yamamoto: Sure. It’s about a woman who doesn’t quite have her shit together. Going through everyday life, wallowing, while her friends around her seem to have it together. Thinking “am I crazy?” Because she doesn’t have her agenda in front of her, she kind of gets lost along the way, and gets stuck in situations she didn’t think she would.

CV: What inspired you to create “Uninspired?” Pun intended.

BY: I wanted to do something super comedy based. Something that was slightly closer to an expression of what was going on for me. It has elements of real life stuff. And things that I think are kind of annoying or funny in real life in New York. I’m a transplant from LA so I guess some of this is coming from an outsider point of view.

CV: Sarah interacts with a lot of people who are total oddballs. Is that how you see New Yorkers in some way?

BY: I think it was a big culture shock for me [coming to New York]. In LA you can kind of be with the people you know, or with your group, you can kind of control that more. Not that you can’t control that here, but it’s kind of cool because out here I feel like I can talk to strangers more. I talk to strangers and it’s never a weird thing. It’s kind of fun that way. It makes things a bit more unpredictable. It feels like you can just kind of walk into [any situation]. I do that sometimes. [I’ll ask] “What’s going on over there? It looks like they’re giving out free drinks!” In LA you’re driving a lot, and it’s not like you’re gonna pull up in front of a random building (to get free drinks).

CV: In terms of the writing of the show, as I watch Sarah interact with all these weird people, it becomes like a formula for the series. It’s like every episode she interacts with some person who’s really odd, and she’s kind of normal, but the weird person manages to drag her into this situation nevertheless. Her life is sort of unguided but she’s also game for anything. So it seems like there’s a specific kind of formula you’re going for?

BY: Yeah totally. I guess I hadn’t thought of it in that way, but yeah. I think it speaks to a character who’s a little aimless. But I think part of it also has to do with moving here, and I felt that [formula of meeting strange people] kind of guided my first few years [in New York], especially when I was here and just trying everything and meeting all kinds of different people I’d never met before. I think that totally inspires the show.

CV: Is there a sense, if any, of Sarah’s Asian-American identity in the series? And does that have any kind of impact on the stories you’re trying to tell?

READ: Our recent interview with the writers of DC Comics’ Batgirl and the Birds of Prey!

BY: I don’t think I’m always aware of it. I’m aware of it in life. But that’s another thing, I don’t always think of myself first as a woman or an Asian American. I definitely wanted to approach (the show) and be like, “This is one person’s life in this situation and I also happen to be Asian American.” It’s so hard with identity stuff, just because it probably subconsciously informs a lot of stuff, but it’s hard to know what elements are in there. That’s one thing I really liked about [the series] “Insecure.” (The actress) is showing us another aspect of the experience without [discussing it overtly]. That’s one of the most refreshing things for me, when (multi-racial elements in a series) are there but not necessarily the thing that’s focused on. So my roundabout answer is “not explicitly,” but [Asian-Amaerican] is who I am.

CV: I really like that character Mark, the guy who for some reason is really into humming the theme from Jurassic Park.

BY: Oh Ryan, he’s so funny. He’s like a surprise weirdo. He’s such a handsome man, but then he has all these funny quirks and weird stuff he does.

CV: Did he come up with that humming bit on his own?

BY: He totally did. It was totally improvised. It’s funny too, because someone wrote a Youtube comment [saying], “My favorite part was the Jurassic park theme song thing.” I’m like, I didn’t even write that!

CV: In terms of where Season 1 ends, we see that Sarah is attempting to take her life into her own hands. She tries to propose to her boyfriend, but it doesn’t really work out. And she winds up in basically the same place she started. I’m curious how this leads into season 2. Does Sarah evolve and begin to take charge of her own life? Or does it continue to be a struggle for her?

BY: She does take charge and make some things happen, but it is a continual struggle. (Her and her boyfriend) wind up breaking up in the second season and she moves in temporarily with her sister. But she’s also still kind of reacting to things as opposed to making strong life choices. Even though she thinks she is.

CV: So it’s kind of like she wants to make changes and she wants to move forward but she doesn’t know how. I think that’s one of the most endearing aspects of Sarah.

BY: Yeah, it’s kind of sad. And I’ve gotta say, I think that’s how I feel about things. You know, “I’m in charge of this.” But then life kind of dictates what you’re able to actually do. Not always. But we tend to think we’re affecting something, when (we might not be).

CV: What else can you tell our readers about the new season of “Uninspired?”

BY: I think it’s an extension of the first season in some ways, maybe a bit more blown out. There’s a dream episode, with a nightmare dream wedding, which I’m really excited about. There are some repeat characters who come back. Like Christine from the bridal shower episode [in season 1], she’s hilarious. There are a few episodes focusing on the supporting characters a bit more, like Christina. And one that focuses on Doug [Sarah’s boyfriend] a bit more, Doug’s office life. [The second season] is an exploration of some of the characters’ choices in the first season, taking them further. And more awkwardness.

BY: I love awkwardness. I think it’s all I know, really.

Our thanks to Becky Yamamoto! Check out the first two seasons of “Uninspired,” now available on Youtube! Read more about Becky at her website, http://www.beckyyamamoto.biz/