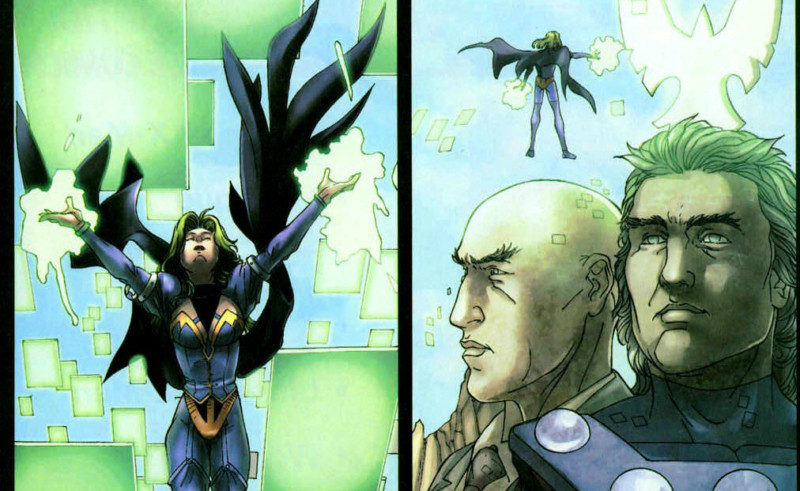 I wish things were as simple as comic books used to be. I’d like to meet someone who sees Superman saving a trainful of orphans from plunging into a ravine as “morally gray.” Yet as time wore on, simple stories became replaced with more complex ones. This change may have occurred because the audience of comics was changing. No longer were they sold on newspaper stands to children but in specialized stores to older audiences. This change is evident in UNCANNY X-MEN #442-443. Written by Chuck Austen and drawn by Salvador Larroca, the narrative blurs the lines between two opposing ideologies, showing how, in great times of political divide, parties may find themselves demonizing one another.

READ: Who wants more politics in their X-MEN? Read our review of X-MEN GOLD #2 here!

Everyone wants to incite change. People just can’t seem to agree on how to it. UNCANNY X-MEN #442-443 starts with the team fighting about how to handle the funeral of Magneto, who just died in a fight in New York. Some believe he deserves punishment even after death, while others argue that he deserves same decency as anyone else. This debate escalates until Polaris decides to play devil’s advocate, trying to show how even Magneto’s flawed vision has some goodness within it.

X-Men fans frequently compare Magneto and Charles Xavier to Malcolm X and Martin Luther King, Jr., respectively. Both want the same thing, yet their methods of obtaining it differ drastically. To claim that one method of rebellion is superior to the other simplifies the complicated issues of this debate. Neither are perfect, yet both come from a good place in their hearts. Xavier truly believes in humanity, while Magneto has no such “delusions.” In a way, this strife resembles the age-old political party divide that plagues America. Both believe they must do what’s right for their country (in theory), yet neither can agree on how to do it. So when one side appears to have failed or not progressed quick enough, an extreme alternative rises in its place that threatens to shake the very foundations of the system.

The Good, the Bad, and the Ugly

“Don’t judge a man until you have walked a mile in his shoes.” These words by Harper Lee perfectly signify the comic and its political message. Magneto’s vision undeniably has flaws, but so do many other political beliefs. When people feel attacked by a system that they cannot control, it’s only natural they’d fight back. To say one reaction is superior to another completely glosses over why people have to fight in the first place. It’s no secret that mutant-kind is treated terribly simply for existing, just as many people within our society are constantly endangered by the current political administration. When one method, a method like Xavier’s, proves inefficient, it’s easy for people to look towards different, albeit flawed, means of change.

Both issues deal heavily with protest. In UNCANNY X-MEN #443 Polaris and Professor Xavier debate about why he holds his pacifist beliefs over Magneto’s more violent yet seemingly effective ones. The argument between the two mutants escalates when she brings up how terribly people treat mutant-kind and argues that Xavier’s method does nothing to stop their maltreatment. He wants people to understand there truly is no difference, but, as Polaris continues to point out, nobody is willing to listen. On the other end of the spectrum, Magneto physically fights against the powers that be. Magneto treats fighting oppression like a war, demonizing the other side to ensure his kind will live another day.

This type of debate also exists in the world outside of comics, such as in the recent TV show BROOKLYN NINE-NINE. This happens when one of the officers almost gets arrested for “looking like he didn’t belong” in a predominately white neighborhood. Almost getting arrested makes him want to file a claim against the officer that wronged him. Like Xavier, the chief of his precinct initially does not want him to do so. He believes change must be made from the inside, not through the outside protests that someone like Magneto would champion. Yet the officer makes a critical point that unites both philosophies together — if they don’t do something now, when will the change happen?

What We Can Do Together

This is what Polaris argues for. She wants change, and Xavier’s method isn’t working. Polaris sees the value in Magneto’s argument, especially since Xavier’s way hasn’t saved more mutant lives. She believes it too passive, given how many mutants regular humans slaughter. Ultimately, her arguing with Xavier just leads to crying and sadness. The comics show how intricate the debate between the two ideologies is without really resolving which is better. It is up to the reader to decide which method they choose. Personally, I believe that the debate itself shows a need for these two groups, the more active and passive forms of protest, to come together. Their usefulness is situational, and with both sides allied together, there’s strength in numbers.

Polaris’ type of rebellion might look like something Magneto would carry out, something scary and extremely outspoken. It comes from a place of fear and frustration with an entrenched system. Instead of fighting the organization, the Magnetos and the Xaviers of the world bicker amongst themselves. For the only true way to make progress is to come together. To find a medium where both sides can speak and know what they want to say to the pervasive power. To fight back against the tyranny of the masses and create a new world order. Though imperfect by themselves, the two sides come together to become a complete whole. United we stand, together we fall.