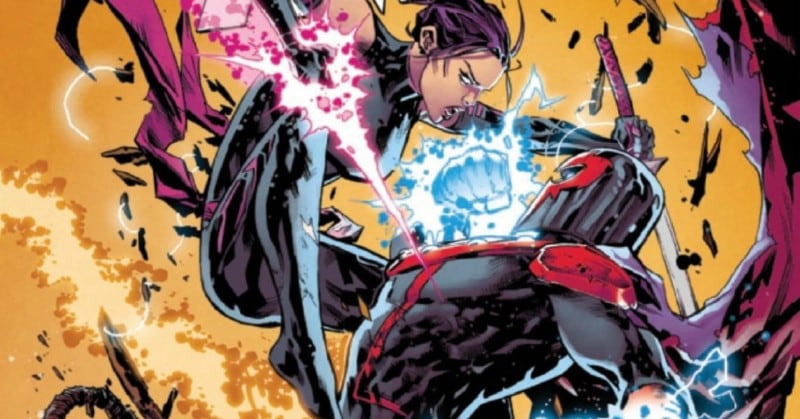 UNCANNY X-MEN #19 follows the events that took place during the INHUMANS VS. X-MEN storyline that ended with issue #18. With the X-Men now ‘spread out’ and seemingly disbanded, it appears as though Magneto has finally achieved one of his long-term goals: destroying the X-Men. The only problem with that? We still have Psylocke on his trail, and she is clearly not happy! This issue is all about Psylocke and Magneto from start to finish. Writer Cullen Bunn and artists Edgar Salazar and Ulisses Arreola do a wonderful job with this issue, even down to the minute details that went into the cover art. 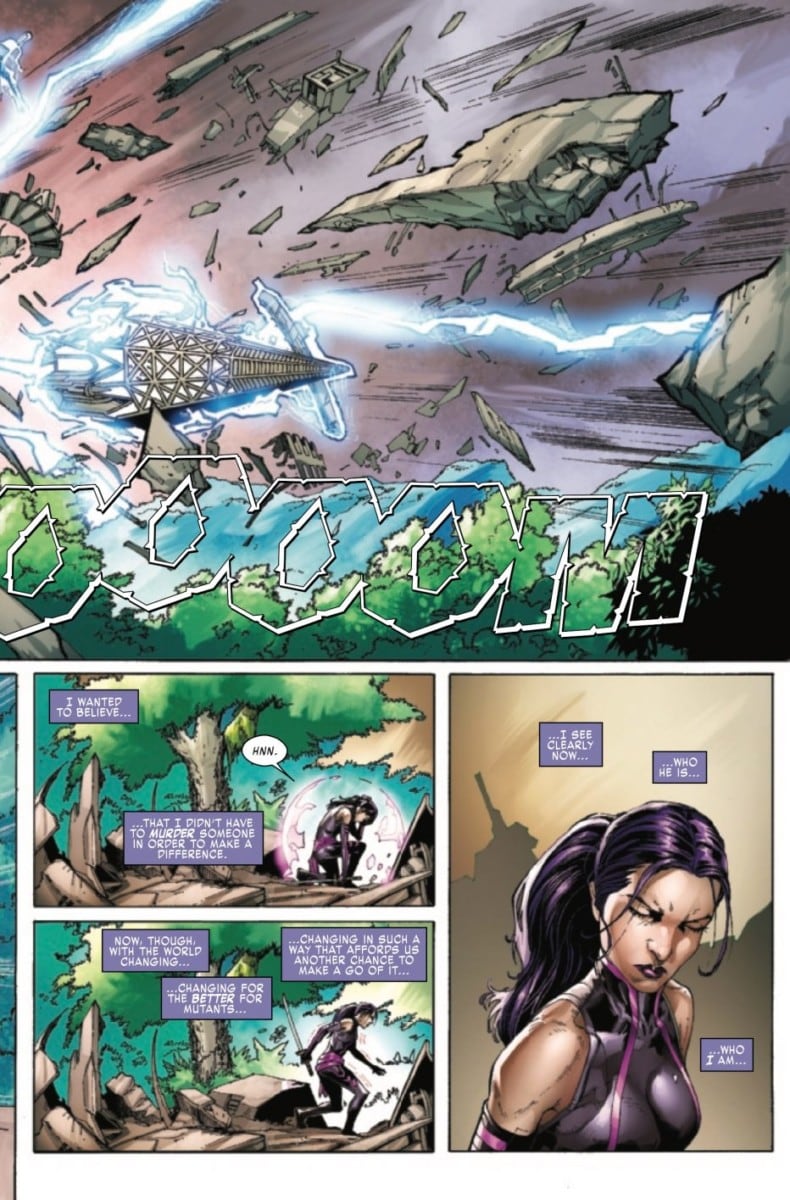 We start off this issue with Psylocke running towards what we know to be a confrontation with Magneto, all the while she’s reminding herself of all the reasons he needs to die. Psylocke seems almost angrier with herself for believing in Magneto’s cause than she is at Magneto himself. This makes the opening panels that much more dramatic, as the build is slow and purposeful. I also think it’s nice to have Psylocke make it a point to note a specific event for this confrontation – in this case, it was the reveal that Magneto had been working with Emma Frost to destroy the Inhumans. Right there we get two things to help this storyline make sense: motive and rationality.

READ: Mutant or Inhuman fan? We reviewed INHUMANS VS. X-MEN #0!

The story itself did read more like the slow climb to a climatic fight scene at the end of an X-Men movie than a traditional comic book story. That isn’t a bad thing, though. I’d dare to say it actually made the story much more captivating considering how short of a read it was. Any issue that starts off with the hero engaged in an active pursuit really thrusts the reader into the moment. We knew from the start that Psylocke was on a mission. That mission, of course, was to kill Magneto. When you compare this to any other comic book, any other X-Men book, it really does stand on its own.

You can read a hundred comic books and never know how intense or how engaged the heroes and protagonists will actually be when they finally meet in battle. Here, we already know what we’re getting: a showdown between Psylocke and Magneto. You can definitely get a feel for her anger and frustration towards Magneto, and you can understand why she wants to destroy him. That feeling is certainly reinforced for me when Psylocke reminds Magneto that ‘his X-Men’ are no more. We then see panels depicting Mystique, Sabretooth, M, Xorn, Archangel, and Fantomex in their ‘new’ separate lives. They’re separated from the team and driven away by the actions of one man: Magneto. 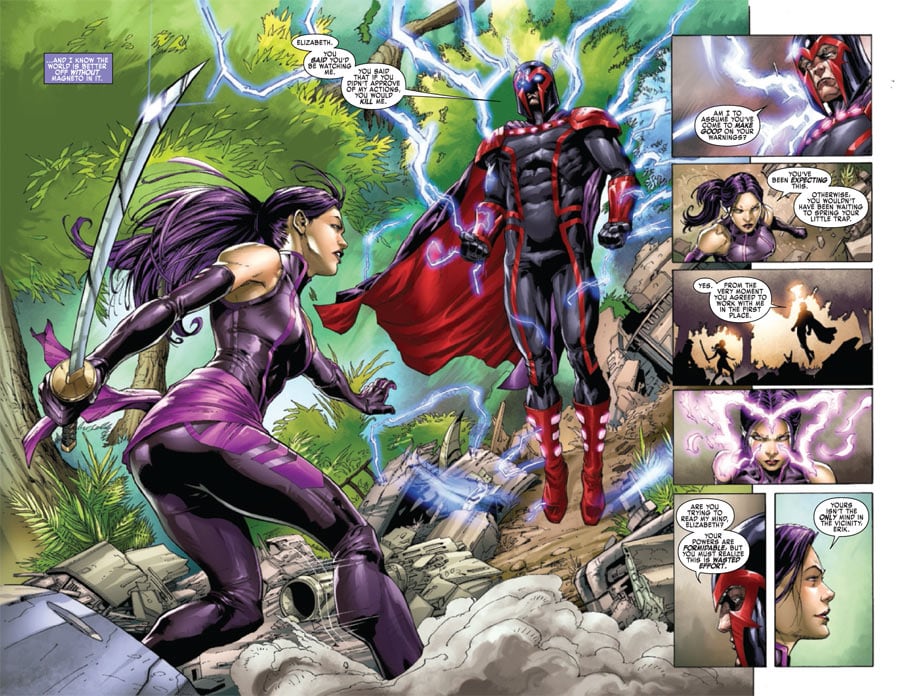 What I find intriguing about the end of this issue is just how remorseful Magneto seems despite being ‘prepared’ for his encounter with Psylocke. By the time she takes him down with a telekinetic sword, Magneto seemingly agrees with her on all the reasons she says he needs to be destroyed. To put it in Psylocke’s words: “You’re a poison. You wanted us to be X-Men. But you also wanted us to be The Hellfire Club and X-Force, and the blasted Brotherhood of Evil Mutants. You wanted it all, and it cost those around you everything!” This is one of the more engaging and emotionally charged fight scenes I’ve read in awhile. When you break down the scene in terms of pure emotional context, I’m sure a lot of readers had this feeling as well. To have someone you trusted, or maybe even the reader themselves, hurt and affect the lives of those around them based solely on their actions — that’s a very powerful way to tell a story.

As for the artwork, the colors in this issue are vibrant and sharp when needed, yet darker and softer at times as well. I think this is a necessary contrast to this issue. You never want to take away attention from the primary figures and action going on in a scene. Edgar Salazar and Ulisses Arreola’s decision of making the trees, rocks, dirt, and sky surrounding Psylocke or Magneto wouldn’t have made sense. The artwork here is nearly flawless in my opinion, and it gets me excited for the issue from the get-go! First impressions really can be everything when it comes to picking up a comic book, so it’s vital the artwork is appealing. With UNCANNY X-MEN #19, I could tell from the beginning it was going to be an emotionally charged and action-packed issue. Again, this was due in no small part to the artwork on the front cover. Well done.

READ: New to X-Men comics? Here’s what you need to know!

While UNCANNY X-MEN #19 doesn’t result in any shocking deaths or earth-shattering revelations, it does tell a great story. By the end of this issue, I’m left wanting more, while at the same time feeling satisfied with what I have read and what’s clearly to come. Action, engaging characters, a backstory that makes sense, and a dramatic end scene with a twist — there really isn’t a lot more you can ask for from an X-Men title. This is a solid issue from start to finish.