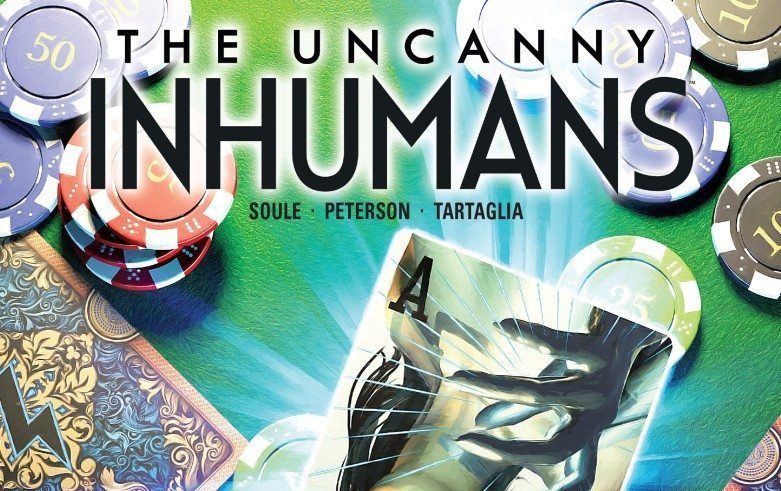 The new UNCANNY INHUMANS story, “The Quiet Room,” is not so quiet. Chaos fills Black Bolt’s new bachelor pad and everyone’s looking at the former Inhuman king for answers.

Last time in UNCANNY INHUMANS #5, the Inhuman Queen Medusa drops off her son Ahura at his father’s new home, The Quiet Room. The Quiet Room is magically hidden inside of Grand Central Station. It’s your average nightclub equipped with a bar, open floor, and in the back there are several rooms for all types of misconduct and other purposes. In these rooms, we are shown a dinner for Ahura, an Ennilux conference, a fight conference, and a villain’s poker game. Apparently anything goes for Black Bolt, and he just wants a place where business can be conducted without incident. However, things fall apart when the fighters decide to brawl. A couple of poker players challenge each other, and something important is stolen from Ennulix. 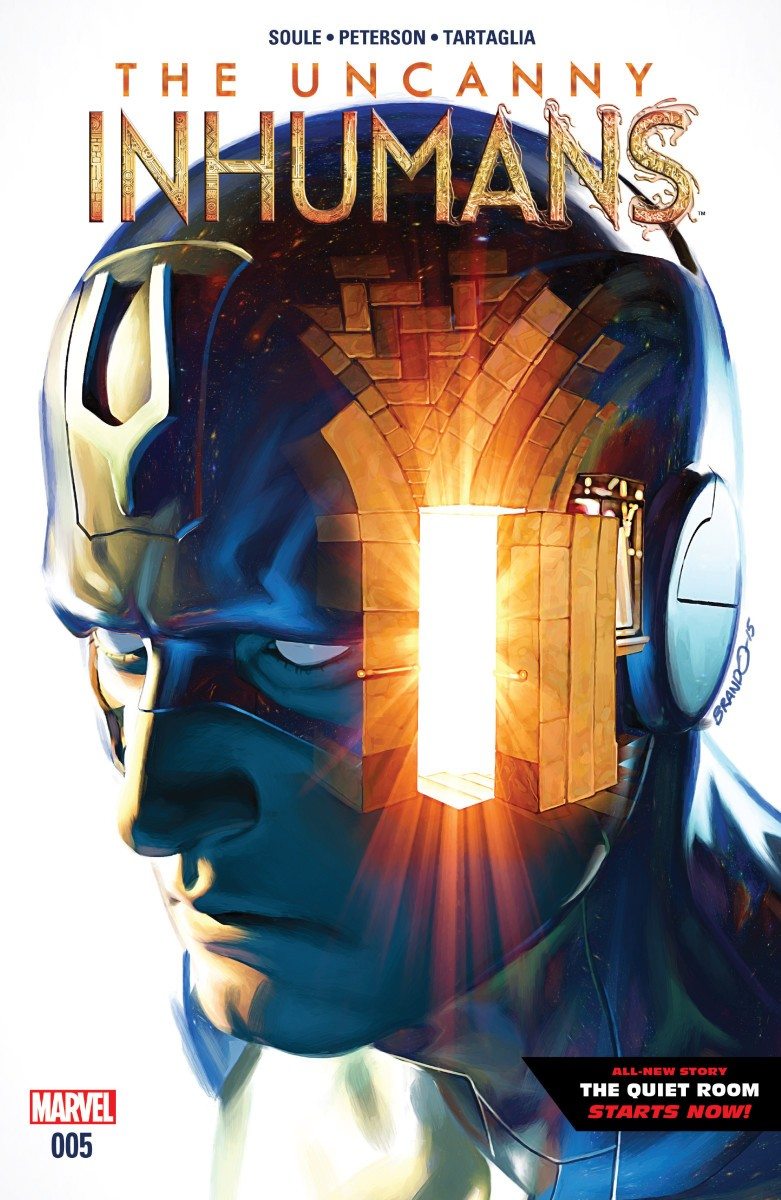 UNCANNY INHUMANS #6, written by Charles Soule, jumps right into the action. An assistant barges into Black Bolt’s office to inform him of the current problems from the previous issue. Black Bolt assigns Iso to deal with Mad Tinker and the Leader at the poker game, assigns the Reader to find the stolen Ennulix item with the help from Frank McGee aka Nur, and decides to deal with the fight between the Moloid and Lava Man by himself. 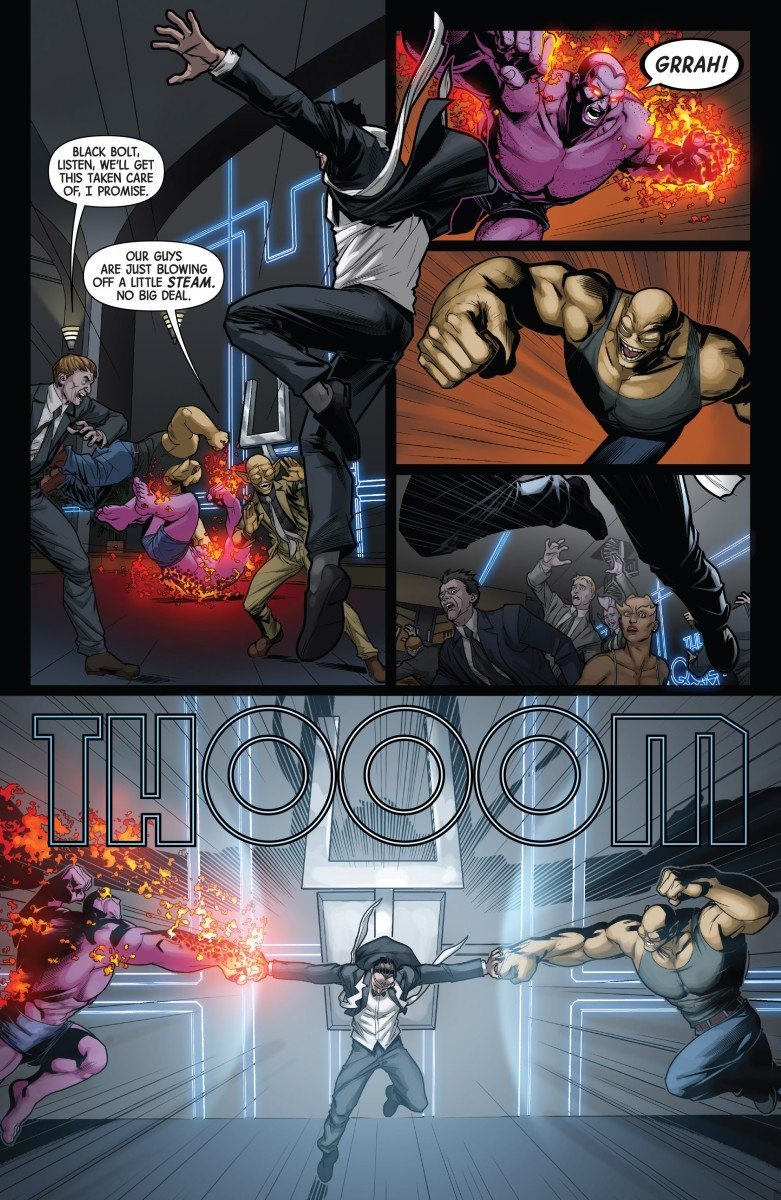 Many of the story events in the issue feel like filler since the main focus going forward will be the storyline about the stolen Ennilux item that threatens the Inhuman race. We get too much of the new Ennulix leader, Marishi Spin, complaining and threatening the Inhumans to get his revolutionary property back. The fight is just some nice action, but it does present a reason for Black Bolt to be late for dinner with his son. While Iso’s problem-solving skills are impressive, the poker game with the Leader and Mad Thinker is pointless in regards to the main story.

READ: Take a walk down memory lane with our review of UNCANNY INHUMANS #1!

The art is very detailed. It seems like the art would be a challenge because of the large number of characters present. We have several Inhumans with different looks and powers to be drawn. Also, there are others like the Moloid, Lava Man, and Spin shown in many of the panels. The scenes are very packed with all of these characters in the same space and speaking with each other about the problems present in the club or trying to solve those problems. Overall, the art is impressive. 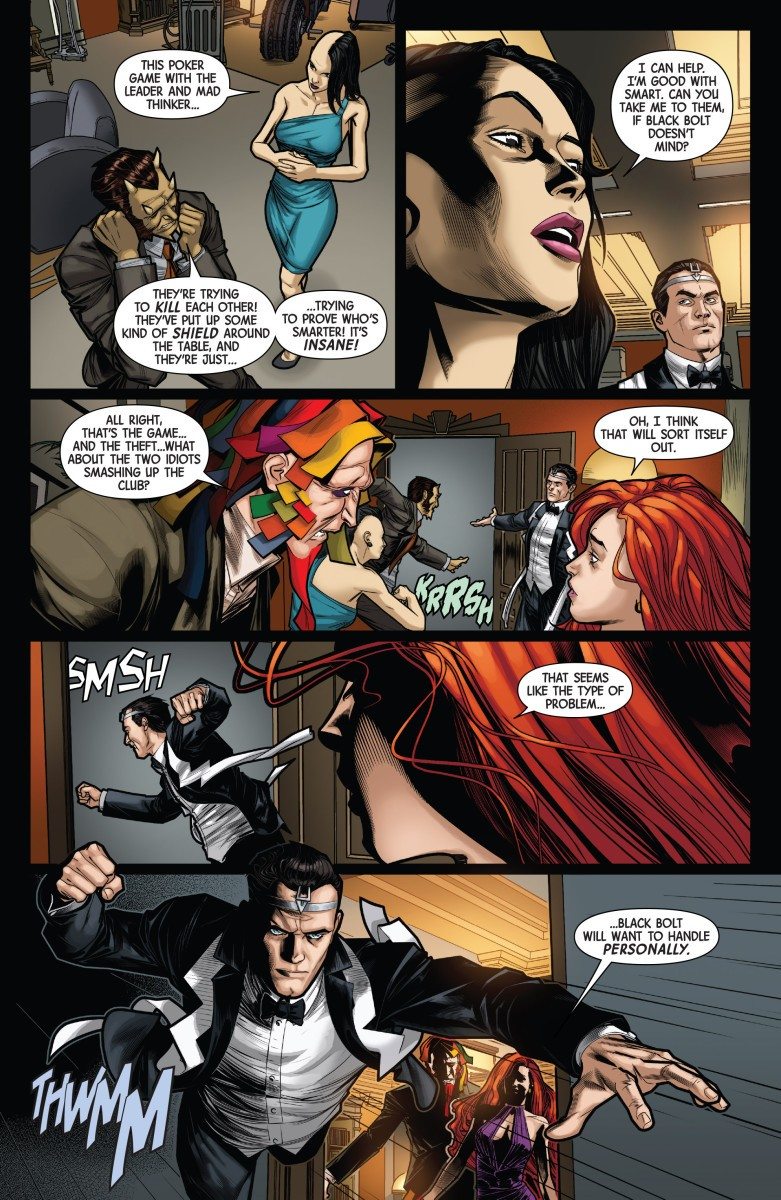 I would like to see the issues that follow continue the main conflict with Ennulux. We do get to see who hired Fantomelle and Culpepper to steal it, and the story direction seems as though it will be a huge threat for the Inhumans. I’m also interested in seeing whether or not the subplot with Treste will go anywhere, and if she is at the club for any other reason, then wanting to have fun. This goes for Ahura as well. Side note: His conversation with the hologram of himself was…ominous. I will definitely look forward to the next issue. There is a lot more to discover in The Quiet Room.