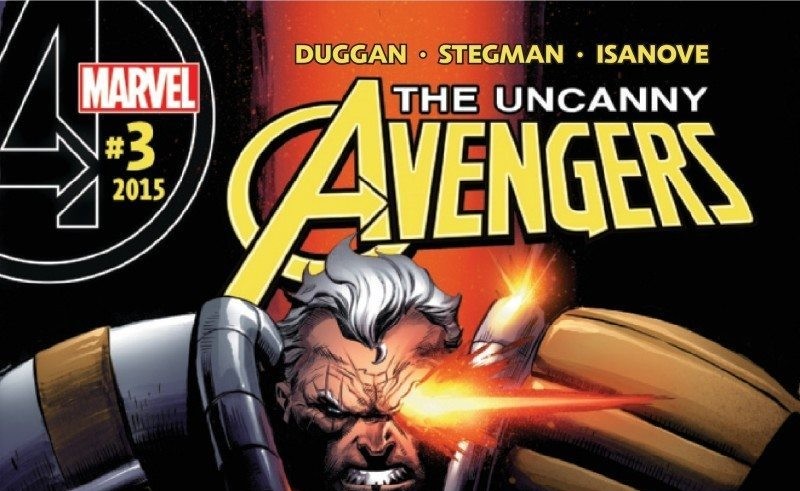 Steve Rogers’ Unity Squad has faced a lot of issues throughout the years, but nothing like Shredded Man, the team’s first Inhuman nemesis. After his plant creature attack on Boston, will the team survive their first big mission? Will Cable’s vision of the death of mutants and humanity come true? Did I just say Cable’s back in UNCANNY AVENGERS #3? Hell yeah, I did!

I haven’t seen this much talking in an AVENGERS title since Bendis left the book. That’s not to say this is a negative thing, communication between characters is key, and this issue does great work of getting into the mindset of each character. Well, not Doctor Voodoo, but he does save Quicksilver, and “actions are louder than words,” as some say. Duggan and Stegman are both exceptional as creators and their talent is highlighted in the dialogue and pencils of this issue. The major problem with this issue is that, despite the introduction of 90’s powerhouse, Cable, and the villain’s reveal, the read felt like an uneventful, fill-in issue. 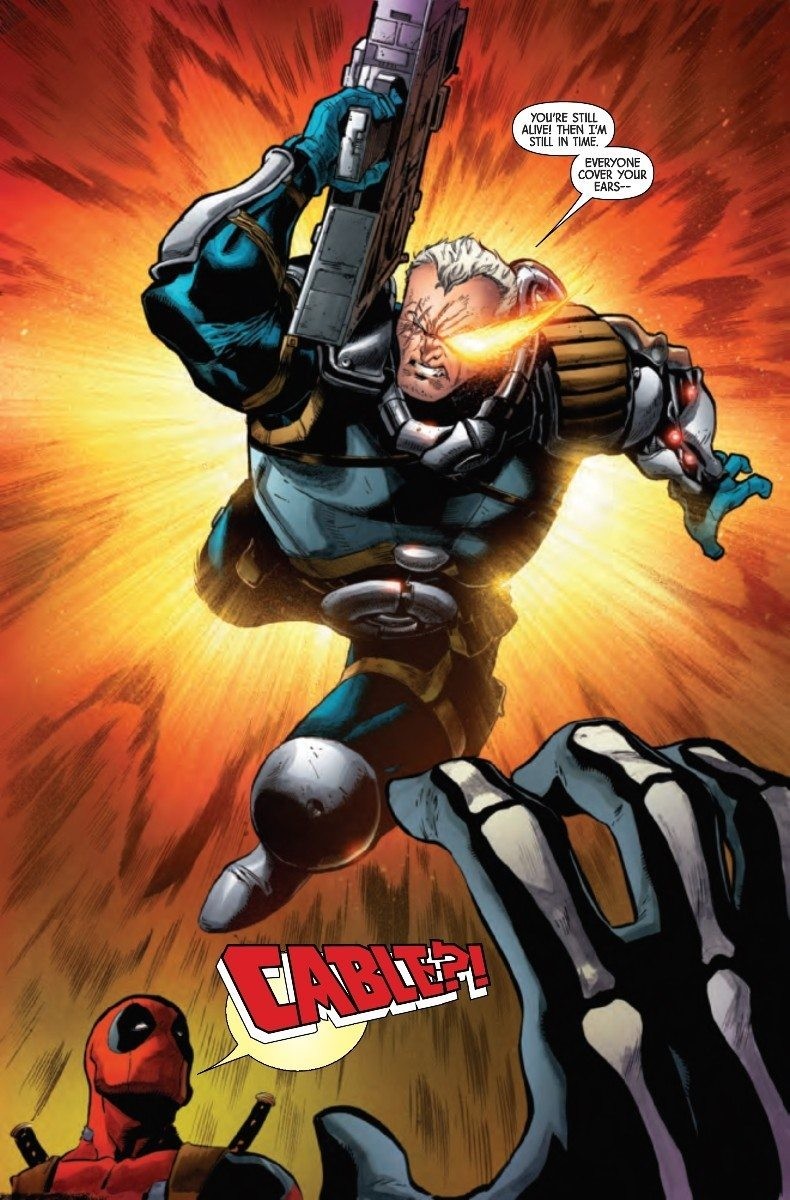 The issue opens up with Doctor Voodoo saving Quicksilver from an unidentifiable demon’s attack, the voice knows Voodoo and refers to him by his first name. We then see the team trying to settle a potential riot of infected people trying to get out of Boston. A gun is drawn and Deadpool takes out the assailant with a bean bag and a quip. It’s at this point that Cable arrives and tells the team that in his future, there is no one left but Inhumans. He begins to shout commands at the team with Rogue telling him off for not being the leader and in the middle of this, Deadpool is the voice of reason. (Is this an alternate universe? Am I missing something?) Deadpool talks Cable down and it is revealed that he has an antidote for the Shredded Man’s plague. Before Quicksilver can bring it to Human Torch to reproduce, the team is knocked out by an attack from the Shredded Man. The only two members of the Unity Squad left standing are Cable and Synapse; her exposed Inhumanity leads to a prejudiced response from Cable as he cares for Rogue. Synapse goes off to confront the Shredded Man, where he not only reveals his desire to wipe out humanity but also his relation to Synapse- he’s her grandfather!

READ: Check out Sean’s review for issue 8 of SECRET WARS!

Another crazed villain with the desire to commit genocide in the Marvel universe? You can prove it happened by bringing in a fan-favorite from the future? Genocide in comics, especially involving mutants, is such an overused trope that it’s become exhausting to be an X-Men fan. Adding an Inhuman into the variable that wants to commit a genocide of one species and is pretty casual about a second genocide of the other does not make for an exciting plot. This book has an interesting group of characters, yes, but it’s an Avengers title in name only. While adding the element of mutant prejudice on the All-New, All-Different, All-Inhuman Legacy Virus is an interesting element that we have yet to see, it does little to benefit this lazy storyline. 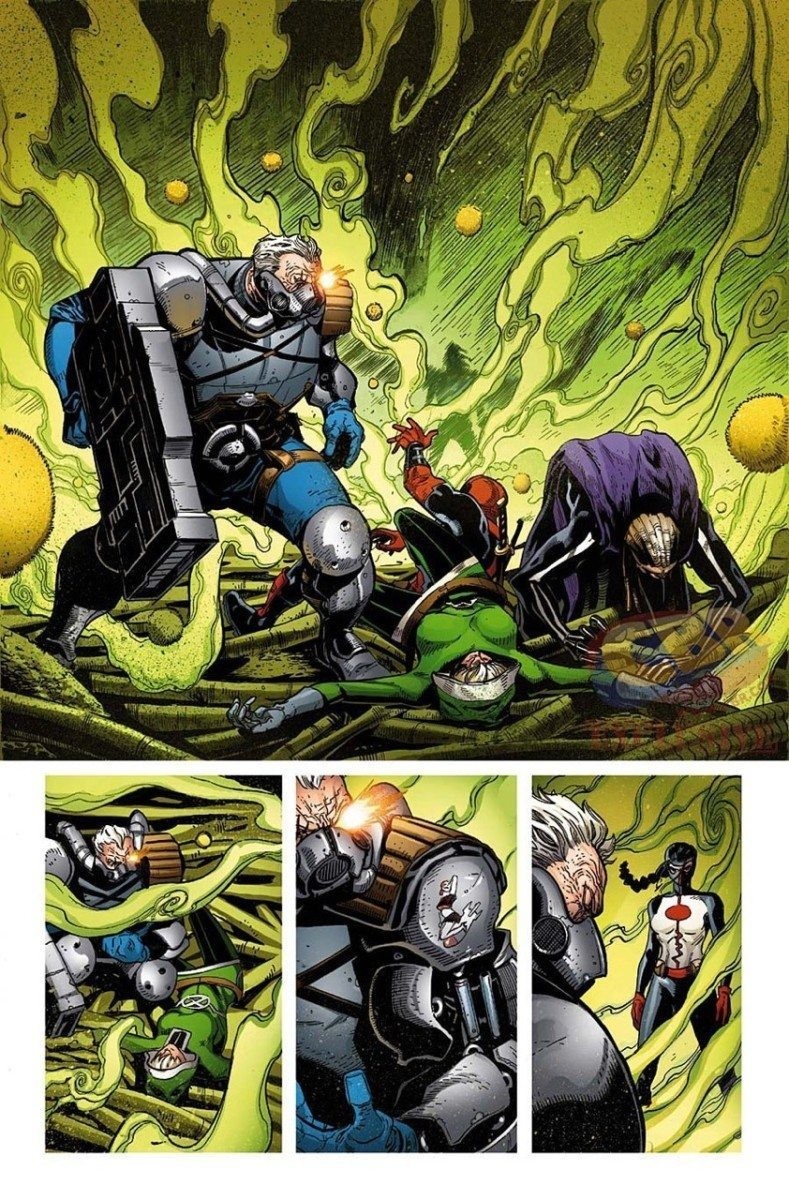 The two saving graces for this issue are Cable and Ryan Stegman. The re-introduction of Cable into the Marvel Universe without Hope is a blessing any fan of the character can be thankful for. This issue reestablishes him as a soldier over an X-Man, and his concern is with saving the future. His combative nature brought an interesting dynamic to the team that I haven’t come across before.

Ryan Stegman kills it on this issue. For an issue that was mostly passive, his artwork allowed the title to move quickly. I’ve always been a fan of his action-oriented style, but the anatomy of his characters shined in this issue. His style allows every character to stand out on the page; human appearances are apparent, but their distinct personalities are represented in how they’re drawn. Quicksilver’s ego has never been more visible on his person prior, I love it.

READ: Check out our review of the first issue of UNCANNY AVENGERS!

I am a bit frustrated with the title, and the genocide storyline is yawn worthy. I am looking forward to learning more about Synapse’s background, but I just wish it was playing out differently. Also, the depiction of Deadpool is vastly different than how Duggan is writing the character in his own title. I won’t spoil that one for you, but I recommend it more than I recommend this issue. If you like Cable and the 90’s, pick up this title. If you’re tired of the same-ol’ Marvel genocide attempts, hold off and wait for the next arc.