UNCANNY AVENGERS #20 is an issue unlike any I’ve seen before. Gerry Duggan and Pepe Larraz have worked to give us a number of special issues during this current run of UNCANNY AVENGERS. These two have continuously provided us with artwork and storylines that have been nothing short of spectacular. This time, however, cover artist Adam Kubert hits readers the hardest. as he paints a wonderfully eerie and detailed picture. The cover art alone brings up a lot of questions for readers. For example: why is there a graveyard littered with the headstones of notable heroes and figures? Combine that, with a plotline that deals with our current ‘Uncanny Avengers’ dealing with past demons and failures, and you have our attention before we even get to page one.

READ: New to this series? Here’s our review of UNCANNY AVENGERS #1

Something I really loved was the layered, psychological elements of this story. The fact that Red Skull was able to take over the minds of The Human Torch, Quicksilver, Brother Voodoo, Wasp, Rogue, and Synapse — using the telepathic powers he stole from Professor Charles Xavier much earlier in the series– and seemingly bury the Avengers so early into the story was quite impressive. Equally impressive was the amount of detail put into the artwork of this issue. Normally when I say I’m impressed by the art of a particular issue, it’s more about the layout and less about character details. Here it’s the complete opposite. While the colors and schemes of the layouts are amazing, I was more impressed by the facial expressions Pepe Larraz took the time to convey as the primary focal points in UNCANNY AVENGERS #20: namely Red Skull, Rogue, and of course, Deadpool. I was truly impressed by the work done here. 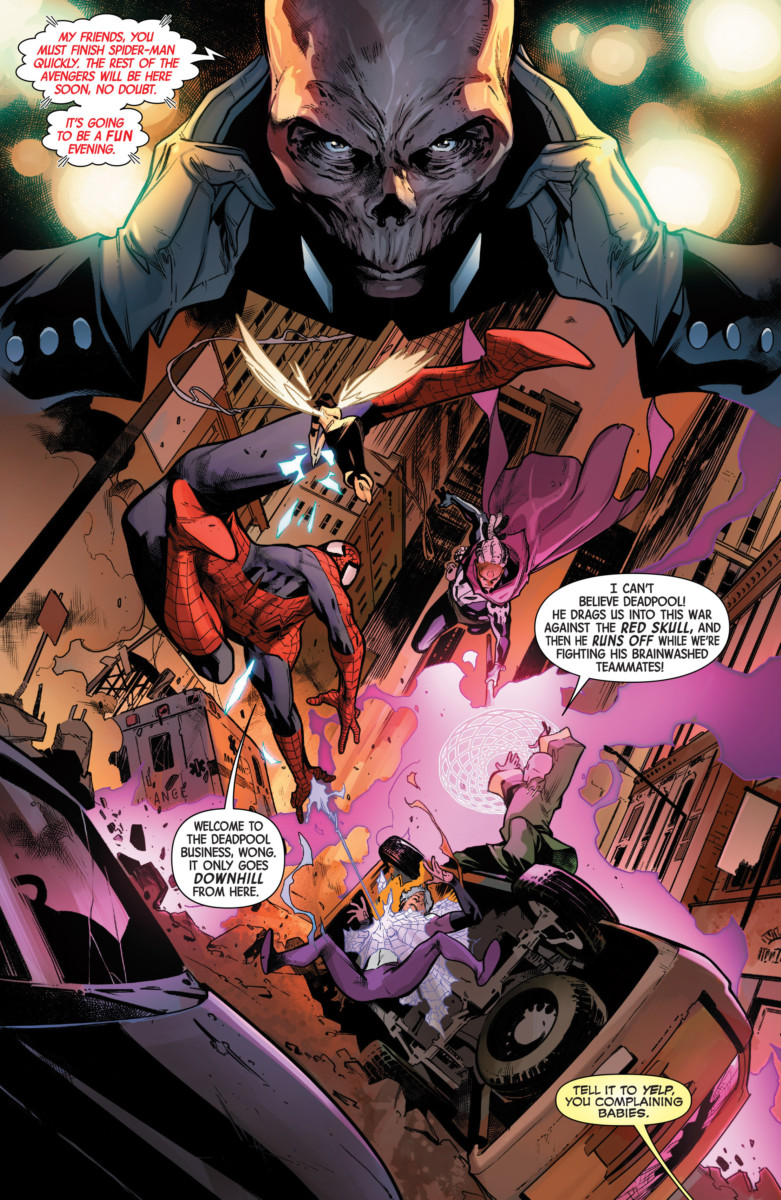 Another thing I really got a kick out of in this story was seeing Deadpool become the voice of reason for the majority of the issue. How often does that happen? Not very. I really enjoyed seeing this different side of Deadpool, and I hope he becomes more of a leader going forward. Should he be the primary focus of a group series? No. But I wouldn’t mind seeing one of Marvel’s most popular anti-heroes taking the lead a bit more often. The plot was a very well conceived by Gerry Duggan. If there was anything this issue was lacking, it would be more backstory that revealed how long it took Red Skull to take over the minds of the other Avengers. Was it more of a gradual process? Was it immediate? Obviously, we know Professor Xavier is able to control someone’s mind almost instantly. So does Red Skull have the same capability? Would it not be harder to control that many Avengers? These are definitely questions I would like them to answer and explore more at some point. 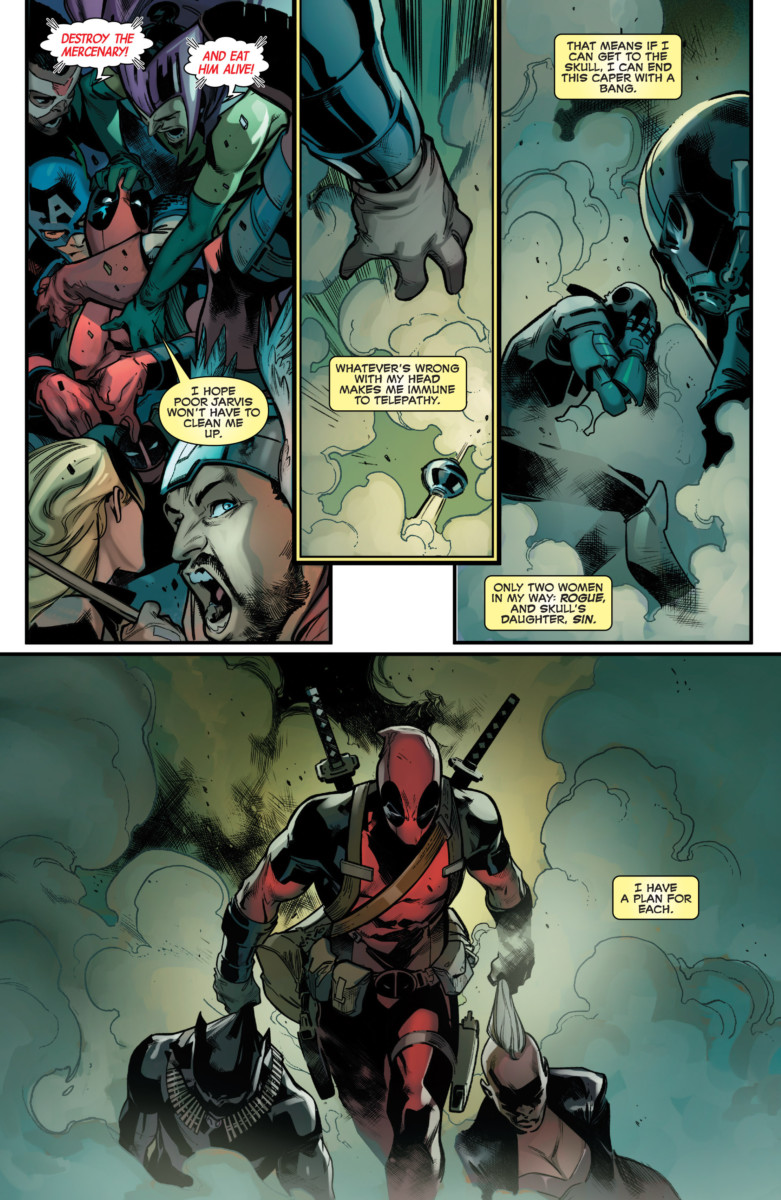 As one would expect, we do eventually see Deadpool, Spider-Man, Captain America and Iron Man get called into action. However, the influx of ‘Avenger star power’ here seemed almost inconsequential to the rest of the story when considering the issue as a whole. When the dust settles by the issue’s end, we see a still mind controlled Rogue getting the better of Deadpool. We also see Red Skull tormenting Deadpool with the thought of keeping him alive “just long enough” for him to see his world come crashing down. I thought this added a much needed dramatic element to the issue. Having multiple factions of the Avengers work together in order to defeat a common enemy was a great way to bring the heroes together without seeming too forced or too contrived.

READ: Here’s more about Deadpool and his essential history!

Throughout this issue, we see a beaten, bloodied, and bruised Deadpool still as defiant as ever in the face of his oppressors. This, of course, is nothing out of the ordinary for any Deadpool fan. It’s just good, old-fashioned Deadpool, right? The jokes and catchphrases were still in this issue of course. But UNCANNY AVENGERS #20 could almost be viewed as a revelation of Deadpool’s abilities as a leader. It was definitely a great way to showcase what kind of hero he can be, and why he’s such a valuable member of the Avengers. This was also definitely one of the darker issues of the series, and quite possibly, one of the darker Marvel comics I’ve read in quite some time. Maybe this is what it takes to elevate Deadpool to a higher level in terms of responsibility within his team? If that’s the case, I’m all for it.

UNCANNY AVENGERS #20 was extremely graphic in terms of violence. As extreme as the violence was, however, it was equally just as psychologically intense. Both seemed to be essential elements, however, with regard to the story that is being told: “death and destruction from within.” How could you not tell a somewhat explicit story, when you have brainwashed heroes trying to kill off their teammates? How could you not showcase the raw emotion and brutality of an epic battle between friends? Every tiny detail placed within this issue was a valuable piece to the overall puzzle.

Sometimes, all it takes to make a good issue great are small, well-placed details with a purpose, and UNCANNY AVENGERS #20 was certainly great. I really enjoyed this issue and would consider this a must-read, not just for fans of the series, but for fans of comic books in general.