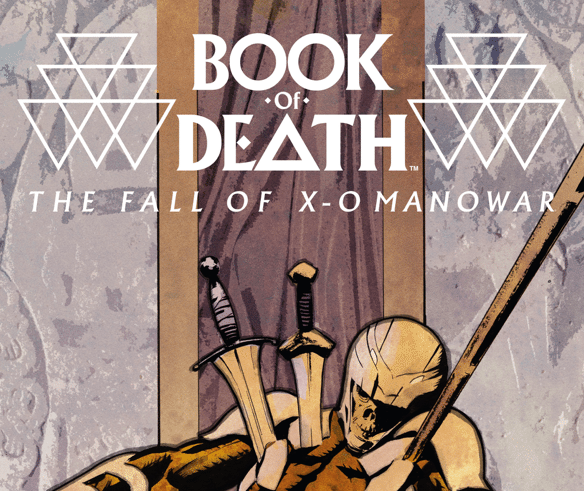 Welcome to another week of Valiant Comics! This week, we’ve got another solid BOOK OF DEATH tie-in, a very funny issue of IVAR, TIMEWALKER and another gorgeous RAI. Keep an eye out for my interview with Jen Van Meter, author of THE DEATH DEFYING DOCTOR MIRAGE and its upcoming (in December) sequel, SECOND LIVES in the next few days! Now, for this week’s comics!

READ: So what happened LAST WEEK in Valiant?

BOOK OF DEATH: THE FALL OF X-O MANOWAR #1 by Robert Venditti, Clayton Henry, and Andrew Dalhouse

The glimpse of the future seen in this tie-in is a bit different than the previous issues. As a child and his family visits the X-O Manowar museum some time in the future, where X-O’s nemesis Commander Trill is planning an attack and theft of the deceased king’s body. The story cuts back to Aric’s last day on earth, shortly before his death. These events take place some time in the future of the Valiant Universe—just as undefined as the others, allowing enough leeway for Venditti and the other writers to use these futures if they see fit (or get rid of them entirely).

The New Visigoth Empire, as seen in the future, is quite a beautiful place as rendered by Clayton Henry and Andrew Dalhouse. In this version of the story it seems that they have recovered from the war currently raging in the main title. It’s nice to see the character, or any character really, have a happy ending. Even though this issue does show Aric’s death, it’s at a very old age, in his successful kingdom, with his loving daughter by his side. And as the other section of the book shows, his legacy is well-regarded. I don’t think that one could ask for a more pleasing ending, honestly. The bittersweet moments of Peter Stanchek, Harada, Bloodshot, and Ninjak’s deaths in their BOOK OF DEATH tie-ins were much more, well, bitter, while Aric’s death is the nicest way that he could go.

Speaking of legacy: Commander Trill’s attack on the X-O Museum is foiled by (shockingly) X-O Manowar! Except it’s Aric’s daughter! Her appearance in this story, her only appearance as far as I know and can remember, developed her character a significant amount in a short time. Her costume is very familiar to her father’s (it’s the same technology) though with a much more interesting helmet. I’m surprised I liked her as much as I did, as a new character, but she was important to telling Aric’s story. Like anyone, her father’s teachings and wisdom live on inside her, and she represents his legacy. I’m not saying I’d love to see a new X-O comic with her as the lead, but for the purpose of the story, she was great.

As I mentioned earlier, Henry and Dalhouse’s rendering of the future is quite lovely. Much of this comic is serene, however the future X-O’s confrontation with Trill and his Vine soldiers is rendered with a lot of vibrant energy and nice choreography.

This was a fitting end to Valiant’s most popular hero, and it left a lot of room between his current comics and this issue’s start for adventures, fatherhood, and whatever else Venditti wants to throw at us.

This month’s IVAR takes us deeper into the world of Roman dinosaur people, which is (as you can imagine from that description) suitably insane. Ivar has been captured and forced to fight in gladiatorial combat, while Neela attempts to barter for his freedom with Caesar Invictus (who I called “Dino-Caesar” throughout the issue).

Last issue, I noted how I thought the “alternate universe” angle that this book was taking was a good idea that opened it up to numerous humor and plot opportunities. I think I was right; this issue is hilarious. Ivar’s arena combat, alongside his new friend Ank (a bipedal Ankylosaur) allows the character’s ingenuity to shine while Neela’s conversations with the dinosaurs enhance the joke even further. Neela even gets a Jurassic World moment as she holds off three toga-wearing raptor assassins (holding knives). This is really a comic you should be reading, if only for sight gags alone. 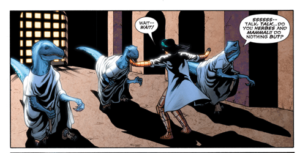 Pere Perez is doing a great job here—I loved his work many years ago in BATGIRL (with Stephanie Brown, my favorite Batgirl) but he seems to have really hit his stride working with Van Lente, as his work here and on ARCHER & ARMSTRONG was kinetic, clean and excellent at conveying humor. 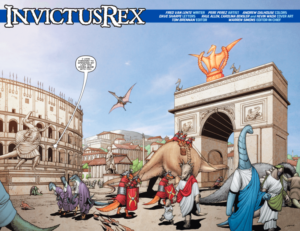 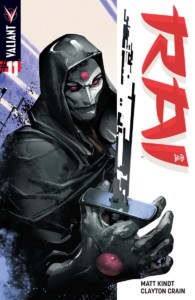 Rai seeks a way to return to Neo Tokyo while building his skills on Earth and learning how to survive without his abilities. Continuing from the previous issue, he’s seeking the Eternal Warrior (the one we know and love) in order to use his help and experience in returning to help his friends’ uprising in Neo Tokyo. Things aren’t going too well up there; Tama and her friends rescue Spylocke from the arena while Momo and Izak attempt to find a lost army of Izak’s people. The Neo Tokyo portions of the story aren’t as thrilling as Rai’s journey through Earth, but they will likely set the pieces together quite well for Rai’s eventual return, and the team’s second battle against the evil Father. Rai is clearly the glue that binds the team together, as they seem lost without his guidance. They’re trying to make it work in spite of his absence, with Spylocke (apparently a descendant or disciple of Ninjak, if previous issues’ hints are to be believed) taking the leadership as much as possible. The end of this arc should be quite exciting, though I hope some of Crain’s Earth will stick around in the future.

I think that this might be the most beautiful comic of the week. I haven’t always liked Clayton Crain’s art—I’m thinking of his CARNAGE series when I say that—but I have completely flipped my position, and now I can’t wait to read each issue of RAI. His slick digital style is perfect for the dystopian Neo Tokyo of Valiant’s future, and the changes that he has made for Rai’s journey on the surface of the ruined Earth ties his metallic tones with organics to create a unique take on a destroyed planet.

RAI is Valiant’s best looking comic, though next month’s WRATH OF THE ETERNAL WARRIOR might bump it down to second. Rai’s earthbound journey and the welcome appearance of the Eternal Warrior make me excited to see where this arc can go.

BOOK OF DEATH concludes with its fourth issue! That’s all that’s coming out, other than its limited tie-in series BOOK OF DEATH: LEGENDS OF THE GEOMANCER, but it should be quite an issue. It’s set to propel the Eternal Warrior into next month’s wonderful looking WRATH OF THE ETERNAL WARRIOR, and bring Master Darque and other Shadowman elements back into the Valiant Universe. I can’t wait! Catch up on the best event of the year now while you have the chance!

Check out more from Alex!