Another Sunday, another fantastic WALKING DEAD. Those of us who didn’t watch last night’s Oscars were treated to a unique episode (titled “Hostiles and Calamities”) in which the background characters, Dwight and Eugene, were the primary focus. This episode provides two perspectives on life (under duress) with the Saviors. While the perspectives of these two characters are certainly engaging, it’s always interesting to see The Walking Dead do these types of episodes that explore minor characters. Not only does it keep the story fresh by showing it from another perspective, but it also gives some other actors some well-deserved screen time. Combine that with some serious Jeffrey Dean Morgan and a total lack of Carl, and you have a pretty solid recipe for success.

READ: Want to read about The Most Recent Walking Dead? Click Here!

Dwight’s character arc just keeps getting darker and darker, doesn’t it? After seeing his daughter die, getting half of his face melted, and his wife leaving, now we have a character who has lost everything he has cared about. “Hostiles and Calamities” showed that now that Sherry has left him, Dwight has nothing more holding him back from being one of Negan’s foot soldiers. And that is a scary proposition. Why is it such a scary proposition? Well, just take a look at the last act he performed out of love for his wife. He got a totally innocent man thrown head first into a fire to protect the woman he loves. Now that his wife left him, he’ll probably be looking to release his anger any way he can, when he can.

Eugene’s story, on the other hand, is downright cringeworthy. Have you ever seen a character “give in” like that so quickly? Some might argue that Eugene is simply doing what he needs to do to survive. He has no idea Rick & Co. have decided to fight back, so in his mind, no one is coming to rescue him. He is doing what he has to do to make himself useful, (notice how he told that story about working on the human genome project to Negan much like he told Abraham) and he is simply doing what anyone would do in that situation. Another way to look at it? Eugene is just a coward, plain and simple. Not only that, but he making the most out of his situation and enjoys living in The Sanctuary. The guy took a bed pan from one of the people who still are on a point system there. And for what? He clearly didn’t need that, the flyswatter or anything else he took. He did it because he could. Eugene might not have the testicular fortitude to commit the violence Negan and The Saviors do, but he sure as heck will share in their spoils.

READ: Want to read an overview of the first part of this season? Click Here!

“Hostiles and Calamities” highlights an interesting pattern: Every single episode that has taken place at The Sanctuary has been enjoyable. Every single one! The reason being is a mixture of two things. Firstly, Jeffery Dean Morgan’s Negan is exceptional. There is simply isn’t a better character on TV right now! And secondly, much like seeing Darth Vader suspended in a bacta tank on Mustafar, it’s always interesting to see the inner workings of the bad guys’ “lair”. You get to see their inner workings and thus, a side of the antagonists you don’t usually get to see. Because of the way The Walking Dead is presented (one hour a week focusing on a specific set of characters), it gets very easy to forget about certain places, certain people and certain events that have happened throughout the season. By coming back to The Saviors’ base only every once in a while, the show keeps the mystique of the group alive while highlighting their true brutality. 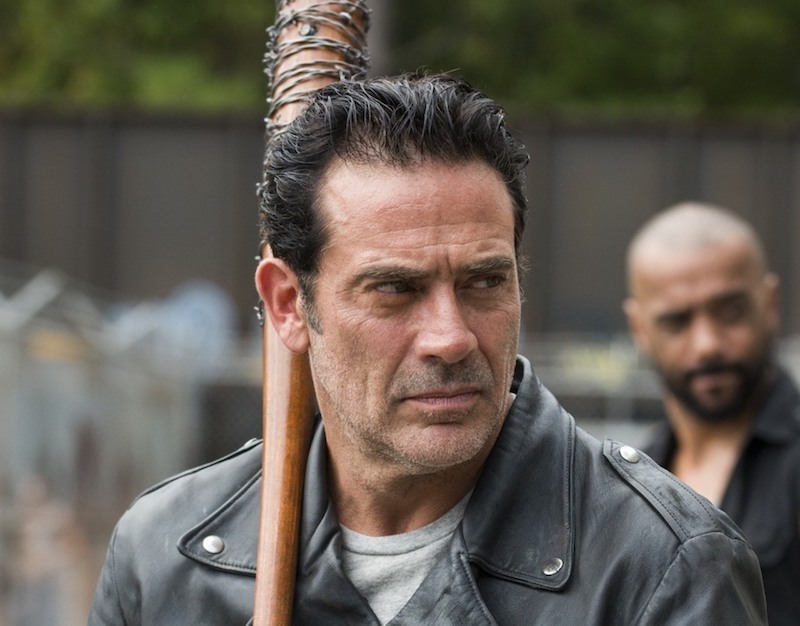 Let’s put our cards on the table here. Not every episode on a show like this is going to further the main story’s plot. If that were the case, this season would have been finished after four episodes. So, you’re going to have episodes like “Hostiles and Calamities”. Ones that explore the characters we already know, rather than the dangers we previously did not. In that vein, “Hostiles and Calamities” was a major success. We got to see how two very different people end up dealing with semi-similar situations and what they are doing to make their own lives easier. After that episode, I’m convinced of two things: 1) Eugene will die whenever The Saviors go to war with Rick’s group. He’ll be told to do something terrible, won’t have the balls to do it, and will be shot. 2) Much like in the comics, Dwight will switch sides mid-conflict, if Daryl doesn’t get to him first. For all of the horrible things we have seen Negan do to keep people in line, Dwight seems like the only person who has actively lied to him time and time again. Dwight seems like quite the tortured soul.  Much like Darth Vader serves Emperor Palpatine, Dwight seemingly only serves Negan because there is nothing else left in his life. If he sees an opportunity to snuff Negan out, he will.