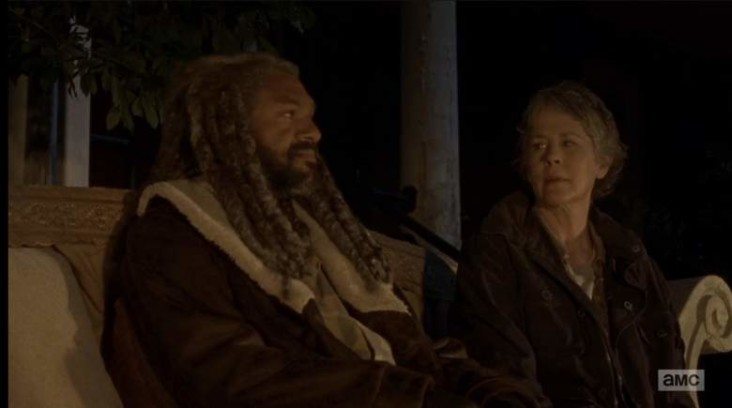 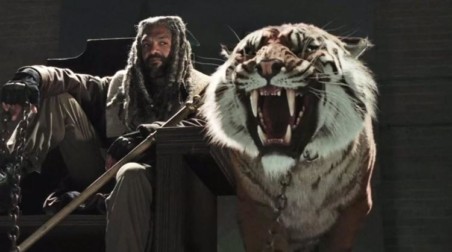 When compared to the season premiere, this Sunday’s episode of THE WALKING DEAD had a considerable shift in pacing. The newest episode was  significantly more dialogue heavy, taking its leisurely time introducing and expanding characters. We were introduced to King Ezekiel and his pet tiger Shiva, living in another community, the Kingdom. More theatrical than most characters on the show, Ezekiel’s campy personality appropriately juxtaposed Carol’s somber story line. During their first conversation, Ezekiel offers Carol a pomegranate as an act of hospitality and welcome to the Kingdom. Towards the end of the episode, Carol decides to stay in the community, and moves into a nearby house. Ezekiel shows up at Carol’s doorstep, again offering her the pomegranate. This fruit is a symbol of love between Hades and Persephone in Greek mythology, and possibly clues us into Ezekiel and Carol’s future relationship.

In Greek mythology, Hades is the god of the Underworld, and brother to Zeus. The story is told that while visiting the world of the living, Hades happens upon Persephone, Zeus’ daughter and vegetation goddess, gathering flowers in a garden and immediately falls in love with her. He consults his brother Zeus, and they hatch a plan that eventually traps Persephone in the underworld. Hades takes Persephone as his wife, and deals with the consequences.

As depicted in the painting above, Persephone was not entirely on board with the idea of spending her life with Hades. She fought and struggled on her way down to the Underworld, and rejected Hades’ love. Needless to say, many gods and goddesses were not big on Hades’ wife-napping, beyond the fact that Hades was technically Persephone’s uncle. One goddess in particular was Persephone’s mother, Demeter, who begged Hades to release her daughter back into the world of the living. Eventually an agreement was reached, and Persephone would spend 4 months of the year in the Underworld, the other 8 with the Living. This agreement required Persephone to eat 4 seeds of a pomegranate given to her by Hades, a symbol of her consent to her captor.

Last Sunday’s episode of THE WALKING DEAD referenced this love story when Ezekiel offers Carol some food, specifically a pomegranate. After Carol refuses, Ezekiel spends the episode insisting Carol accept his hospitality. He continually attempts to convince Carol to stay in the community. When she finally caves and moves into a nearby house, Ezekiel visits with an appropriate housewarming gift: a pomegranate. Like Persephone, Carol was brought to the Kingdom against her will, and only accepted Ezekiel’s pomegranate after she was convinced to stay. 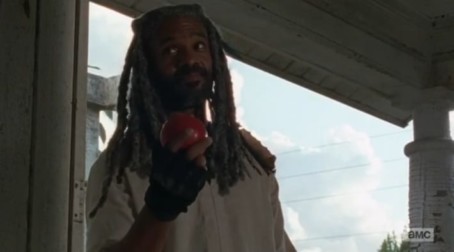 As described in another article, THE WALKING DEAD is attempting some new storytelling techniques this season, like instantaneous character deaths. This past episode’s reference to a Greek myth is another example of the show stepping into unfamiliar territory. What can we gather from this episode’s retelling of Hades and Persephone? Is Ezekiel trapping Carol in the Kingdom, like Hades trapped Persephone? Are we being informed that we should not trust Ezekiel? Is the television show planning on changing Ezekiel’s character from the graphic novel and turning him into an antagonist? Since Persephone eventually becomes the queen of the Underworld, are we learning that Carol will eventually embrace the Kingdom as her home? Or is this simply a clever way for the show’s screenwriters to let us know that Ezekiel is smitten with Carol?

Only time will tell.