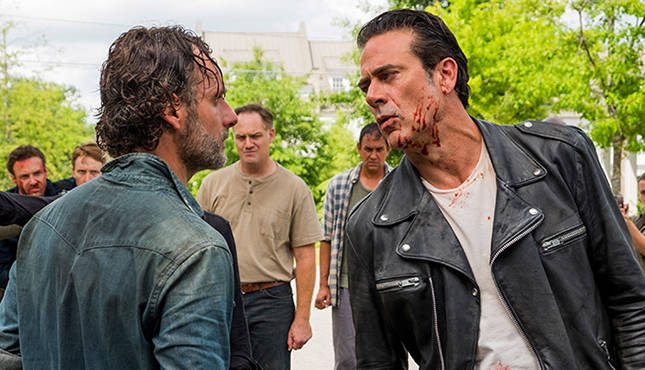 As THE WALKING DEAD aired its mid-season finale this past Sunday, whatever percentage of the audience remaining that’s still tuning in was wondering if this episode would end the first half of the season with a bang or a whimper. This episode’s reviews are somewhat mixed, but most agree that the mid-season finale had some memorable moments and improved pacing; however, it fell victim to a lazily-written plot device.

This episode began where the last episode left off, with Negan getting some R&R in Alexandria. As he meets the folks he terrorizes, Negan kills Spencer during a game of pool when he attempts to overthrow Rick. Rick returns right after Rosita’s failed assassination attempt, and Negan kidnaps Eugene before leaving. Convinced that Negan needs to die, Rick and his group reunite, ready to plan for the upcoming war. 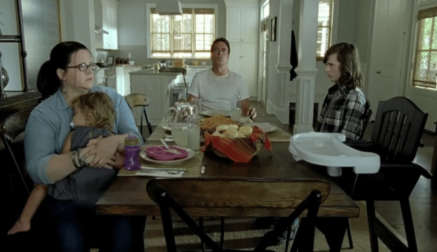 The episode’s pacing was enjoyably upbeat, with scenes consistently transitioning once necessary. Unlike previous episodes, scenes didn’t linger on characters longer than necessary, which had made episodes feel drawn-out. The pool table game between Negan and Spencer stands out, with wonderful character blocking, and an interesting conversation ending in a bloody throwback to a scene from the graphic novel.

This type of fan service is new this season, as we’ve only seen lines of dialogue taken from the graphic novel up to this point. Instead, fans of the graphic novel were able to watch Spencer’s memorable death come to life, something we haven’t seen since Glenn’s death in the season premiere.

Season 7 wrote itself into a bit of a hole with Rosita’s storyline. Rosita spent the entire season sneaking a gun into her possession, and convincing Eugene to make her a bullet. Her sole intention this season was to kill Negan after Abraham’s death. Leading up to this Sunday’s episode her intentions were clear, but the audience was unconvinced. Was anybody really expecting Rosita to shoot and kill Negan as she planned? Beside the fact that Negan was confirmed to be in Season 8, Rosita’s bullet would have been an unfitting, anti-climactic ending to Negan’s story that no one believed was a possibility. Instead, we were just waiting to see how the writers planned to squirm their way out of this one. 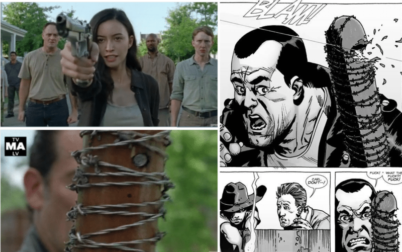 And boy did they ever. The bullet that Rosita spent this entire season to acquire, that she painstakingly begged Eugene to craft for her, that she planned to die for, missed Negan and hit his bat instead. Really? Her shot just happened to go in the one place where it would do no harm? Is there any evidence to suggest she’s a poor shot? Knowing that this is her only shot at revenge, wouldn’t she do everything she could to make sure her timing and accuracy were perfect?

It was eye-rolling at best, and an unsatisfying way to end Rosita’s storyline at worst. THE WALKING DEAD was clearly using Rosita to set up Eugene’s plotline of making bullets, and didn’t feel like brainstorming any better ways of writing herself out of what is now Eugene’s story.

READ: Is it moral to watch THE WALKING DEAD?

It’s easy to say that this episode was better than others this season simply because the other episodes have been some of the worst the show has put out. Despite this, “Hearts Still Beating” was an enjoyable watch, and ends this lackluster season on a high note. As the group prepares to go to war with Negan, so does the audience prepare for what will hopefully be a thrilling second half of the season beginning on February 12th. If the future episodes are anything like “Hearts Still Beating”, then THE WALKING DEAD will likely find its way back to the top.