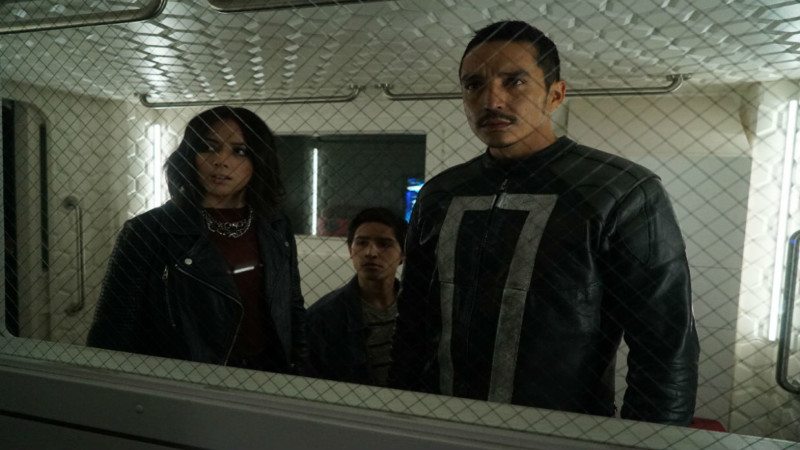 On last Tuesday’s episode of AGENTS OF S.H.I.E.L.D, entitled “The Good Samaritan”, many interesting twists caught fans (including myself) off-guard.With many revelations surfacing in this episode, be it from characters, or from secrets from the past, the show is finally beginning to reveal the truths that have been shielded from us and the characters alike. With that in mind, the show is only six episodes into this season and has already revealed a major spoiler for those unfamiliar with Robbie Reyes from the comics, so beware! Spoilers abound below!

The episode began with a flashback of Eli Morrow (Robbie Reye’s uncle) at Momentum Labs where he seems visibly upset by the fact that Joseph Bauer has made a breakthrough on their experiment with the help of the Darkhold.  The team then rules the testing of the experiment a success when carbon is created with energy. Lucy Bauer then starts to tell Eli Morrow about the Darkhold and how it helped them get this far. This whole flashback gives us the necessary backstory as to why the Darkhold was so heavily sought after by Lucy Bauer. The book seems to be able to unlock secrets of the universe for a price. Although the price of the knowledge given from the book is unknown as of yet, it appears as though misery seems to follow whoever touches the book and uses its powers. I garner that from the fact that Joseph Bauer responds to Eli Morrow by angrily throwing things at him. Lucy Bauer also seemed unstable when speaking about how her husband can become a god from the book. This is in contrast to how she first acted, with the intent of doing the experiment in order to help people. Eli Morrow also seemed to take a turn in his personality when learning about the book in one of the flashbacks. He has a look of lust in his eyes, and later turns the team into ghosts in order to pursue the book. With the Darkhold in the hands of S.H.I.E.L.D. I assume it will be used in later plot points in the season. My thoughts are that it turns a S.H.I.E.L.D. agent into a mad villain, the senator finds about the book and blackmails Mace some more, or the original Ghost Rider comes to deal with it. Whichever choice they make with the book, it should make for good action because it can be used in so many different ways.

The next notable issue that occurred within this episode involves Director Mace and Simmons. After the last episode where the senator blackmailed Mace with footage showing S.H.I.E.L.D. harboring a murderer (Ghost Rider/Robbie), and a known fugitive (Quake) from the previous episode, Mace tells Simmons she needs to go on a mysterious mission. Mace forces her to go alone, as well as wear a bag over her head so she has no idea where she’s going. To me it seems like Mace may be sending her to work with the senator to give her unrestricted access to learn more about the Inhumans. I also believe the Watchdogs will come into play again with the senator in the near future to figure out what to do about Mace ever since he admitted to being an Inhuman. With that in mind, perhaps Simmons overhears a phone conversation between the senator and the Watchdogs and then has to try to convince Mace to act.

READ: More about the latest in the MCU about DOCTOR STRANGE (spoilers inside)!

Somewhat later in the episode, Robbie sits down and tells Gabriel and Daisy Johnson (Quake) his origin story. It’s revealed through a flashback that Robbie convinced Gabriel to join him to watch a street race. But unbeknownst to them, a hit had been put on their uncle which leaves Gabriel without the use of his legs and kills Robbie. Robbie then reveals that Gabriel got the story wrong. After Gabriel said he saw a Good Samaritan he actually saw another Ghost Rider. Robbie also died from this incident and was brought back to life by the Ghost Rider. Gabriel then accuses Robbie of killing all the gangsters that shot them. Robbie denies it by saying the thing inside him that craves vengeance killed all of them out of revenge, not him. To me though, this seems untrue because right afterwards Robbie says they got what they deserved. Robbie is clearly linked to the Ghost Rider as evident from this response.

More that comes to mind here is how Robbie lies to his brother before they start speaking about the incident. Either he’s ashamed of what he is and doesn’t want to tell his brother, or he’s afraid of how Gabriel will react. Next, after the Good Samaritan is revealed to be another Ghost Rider, I wonder what direction they’ll choose to take the character. Maybe they’ll open up a relationship between Robbie and the Ghost Rider in another arc? Maybe they’ll keep the other Ghost Rider in the dark (despite his flaming skull) and use him as a background character? Regardless of what they use him for, after Fitz asks Coulson to give him access to old SSR files locked away by Agent Peggy Carter, Robbie asks Mace about his uncle and Lucy Bauer (which is vital information). Robbie then breaks out as the Ghost Rider. The Ghost Rider then fights Mace while Robbie’s brother watches him beat the crap out of Mace. Gabriel gets ahold of Robbie inside the Ghost Rider and makes him stop beating Mace. This can be used as more proof that Robbie is linked with the Ghost Rider. Maybe he wanted to get out so badly to protect his uncle and seek vengeance on Lucy Bauer, a combination between his motives and the Ghost Rider’s. A fact also worth noting: when Robbie tells his origin story, he actually dies and now joins an exclusive club of “undead” characters on the show (second this season, not long ago Agent May was killed and brought back to life by Radcliffe).

The implications from Robbie’s fight with Mace are manifold. First, Mace does not trust Robbie Reyes at all in helping to stop Lucy Bauer. Mace also loses face with Coulson after finding out about his lie of hiding Daisy and Robbie. Additionally, Agent May doesn’t trust Robbie any more after this incident. But what may be the biggest consequence from this fight is the effect on Gabriel’s feelings for his brother and what this does to their relationship. It seems as though Gabriel has lost trust in Robbie, and does not approve of Robbie killing all those gangsters out of revenge in his name. All of these consequences can have negative implications in terms of the relationships between Robbie and all those involved. Perhaps Mace double-crosses Robbie for the senator in an ultimatum situation. Another possibility is that Robbie loses control over the Ghost Rider and actually kills Mace next time if the Ghost Rider really thinks it’s warranted.

Fitz finally gets into the files he needs and sees that Peggy Carter was looking into Isodyne. Her team was gathering information about zero matter/dark force. Fitz also finds out that Roxxon bought out Isodyne and its assets which also controlled Momentum Labs. What’s important here is that the heads of Marvel Television are finally piecing together AGENT CARTER with MARVEL’S AGENTS OF S.H.I.E.L.D. Hopefully the mention of this second overarching storyline from AGENT CARTER season two allows for more continuity between the two shows. It’s also worth noting that in Bob Harras’ NICK FURY vs. S.H.I.E.L.D. (1988) comics Dum Dum Dugan, who appeared in AGENT CARTER turned out to be a Life Model Decoy like Dr. Radcliffe’s Adda. Hopefully the story can progress that far along so Life Model Decoys of AGENT CARTER characters can come back to life, so to speak, in AGENTS OF S.H.I.E.L.D. More minor characters from the show would be better to use in this scenario such as Dugan since a main character or bigger character like Howard Stark could steal the show and end up bringing up more questions than answers in terms of the whole MCU universe.

Later on, the team raids the power plant where Lucy and Morrow are with communications down between the team. During the raid, Robbie runs into Lucy Bauer; she explains what happened in the past. She tells Robbie that the attack that killed him and left his brother paralyzed was supposed to be a hit on Eli Morrow. She continues on and says how Eli wants to play god and that he started everything by turning her and the rest of the Momentum Labs team into ghosts. After hearing all this, Robbie kills Lucy Bauer for all the harm she’s done to others. The implication from Lucy’s information tells the viewer that Eli has been lying this whole time about his intentions. Eli also lied to his nephews about why he put Joseph Bauer into a coma. After some time, Coulson eventually finds the chamber with the device but needs help shutting it down. Morrow reveals to Coulson that his plan has finally been completed. He then activates the device which hits Robbie, May, Mack, and Coulson which could have unknown effects. Later, Eli Morrow comes out of the tube and creates carbon out of thin air.

The takeaway from here is that Eli was the mastermind behind the Momentum Labs experiment failure and has been after the Darkhold after all this time. We assume Coulson got away, although he was affected by the blast. Additionally, Coulson knows what Eli did in the past but does not know what Eli has done to himself by locking himself in the chamber. Coulson also entrusted the Darkhold to May to protect, since it is heavily sought after. What interests me is the reference to Isodyne earlier and how some materials used by Eli were used in the Isodyne experiments. Could this create similar powers given to the characters hit by the blast of Morrow’s machine as the ones from AGENT CARTER? We’ll need to wait to find out for sure. The thing that makes me most excited here is how the show uses Eli Morrow. Will he be a mainstay villain for a long time with his new matter creation powers? What are his other abilities? How will he differ from the comic version? Will he be a one-off villain after this season like Graviton and Quinn (too soon)?

READ: Reminisce about the early days of Marvel’s AGENTS OF S.H.I.E.L.D. with this season one lookback!

I wish they expanded some more on other things like Mace’s past or Daisy’s relationship with the team, but overall this episode and the season thus far have been both enjoyable and informative. Despite the episode opening many questions (which is to be expected as the show goes on a long hiatus) it showed us new aspects to the story of this season. With glimpses of the other Ghost Rider to think about, Eli Morrow and what he hopes to accomplish with his new power(s?), much is on my mind and I’m raring to see more. Hopefully these events and more will be explained in the coming episodes after the long hiatus (sadface). Until then, prepare for vengeance.