If there was any sign of LEGION becoming less… nonsensical, let’s say, then “Chapter Four” has thrown that out the window. The astral plane. Jemaine Clement (Flight of the Conchords) in a monochromatic suit listening to loud jazz. An episode-ending reveal to make us question everything we have seen up to this point. All of the trippy elements LEGION has been teasing have come to the forefront this week in all the best ways. But the episode actually moved faster when it left David’s head and let Syd (kind of) take center stage.

If there was one thing that LEGION needed to move away from, it was David’s “memory work.” I think the show had gotten as much as they could out of the concept last week, so it was a nice change of pace to let David fight his inner demons in the astral plane while we got to see Syd, Ptonomy, and Kerry Loudermilk work together to “fix” David. They are a fun trio to watch, and we got to see exactly what Kerry’s deal was with Cary. Which led to one of many miniature stories told in “Chapter Four,” as the mysterious Oliver promises from the beginning.

Clement’s Oliver monologs that children’s stories teach either empathy or fear–and that the tale to come would lean one way or the other. Finally getting the lowdown on Kerry/Cary was a nice touch of character development for a couple (or I guess one?) characters who had been mostly background or comic relief up to this point. Their power is still a little confusing, but with the events of the end of the episode, I’m sure we’ll see their extent soon. We heard David’s ex talk about their relationship as Ptonomy and Syd dig for info on David. We even heard a (probably fake) tale that was definitely on the empathetic side from David’s old psychiatrist.

Which brings me to the only real issue I had with the episode. When Syd and Ptonomy are doing their digging on David’s ex, Ptonomy knows exactly where to go, which also happens to be a trap. When Ptonomy sees David’s ex going to the lighthouse, something is clearly wrong, and the psychiatrist’s eye looks suspiciously like the Eye that is hunting David. I know that they thought that David had assaulted the psychiatrist, but it seems way too coincidental. I mean David’s ex even whispered that “they are watching”! Even when they were meeting with the psychiatrist, everything felt too easy. Maybe I’m reading too much into it, but if I’m on the run from a mutant with a milky eye, I’m probably not going to trust anybody that just has one blind eye out of happenstance.

Either way, it led to one of the most exciting sequences of LEGION yet. The realization that the psychiatrist is the Eye, the soldiers lighting the house up with assault rifles, it all continued LEGION’s trend of being the most cinematic show on television. The Eye is also a total badass, just walking through bullets and debris towards his soon-to-be victims. Kerry finally gets her wish for some action, initiating one of two climaxes in the episode. As “Undiscovered First” by Feist (a song from 2011, further muddying the time-frame of the show) plays in Oliver’s ice fortress, Kerry kicks and punches her way through waves of soldiers as her other half Cary mimics her back in Summerland. It was a beautiful sequence, punctuated by Syd body-switching with the Eye in a last ditch effort to save her friends.

This was all crazy stuff, but nothing came close to David’s trippy astral plane sub plot. Oliver showing up in an old-time scuba suit, the Yellow-Eyed Devil following David, even the look of the astral plane oozed cosmic horror. Noah Hawley and co. have done an amazing job on the visuals of LEGION, and the astral plane is no different. Oliver’s ice fortress was futuristic and retro all at once, perfectly fitting LEGION’s hard-to-place aesthetic. It also offered most of the comedic relief of the week, ranging mostly from David’s reactions to Oliver’s impromptu beat poetry slam. “Chapter Four” also briefly touched upon the fact that Oliver is, in fact, Melanie’s husband, but when David brings her up Oliver simply says “I once knew a Melanie.”

But the real meat of “Chapter Four” comes from the unexpected revelation that Lenny might be a product of David’s mind. It raised more questions than it answered, especially given that the information came from the Eye in disguise and David’s ex, who clearly had been influenced by the Eye’s organization. Plus Syd knew and met Lenny in the psychiatric ward. But that shot in the end of Lenny’s hand turning into the Yellow-Eyed Devil supports the fact that not all might be as it seems.

As it is now, she helped David escape the astral plane by showing him Syd in danger. David, the crazy powerful mutant that he is, appears right in front of the transport truck as if he had never been gone. These final minutes were where the episode shined most, as all the pieces came together in all the wrong places. Filled to the brim with gunshots, body switching, and telekinetic badassery, “Chapter Four” ends with a punch to the gut. If Oliver’s opening monologue held any sort of truth, then I would say that this chapter teaches some serious fear (mostly of The Eye). Sequences like these show that LEGION is not afraid to shy away from the easy, predictable nature that some Marvel properties have fallen into. But for now David is back, and I have a feeling he’s going to want some answers from Melanie. 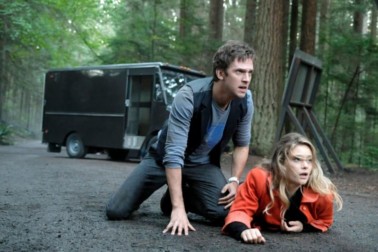