I know that I wasn’t the only person waiting for this twist. If you have a cast of characters who are first seen in a mental institution, the question of whether everything is “real” is in the back of most viewers’ minds. And LEGION doesn’t exactly feel like reality even outside of crazy concepts like “memory work” or “the astral plane.” But such a twist doesn’t usually happen mid-season, which begs the question: “what the hell is even happening on this show?” For an episode that actually began answering some questions, “Chapter Five” moved into the unknown REAL fast.

READ: LEGION “Chapter Four”: The Best Episode Yet is Also the Trippiest

For the second week in a row, David is mostly relegated to the backseat. Well, at least the David that we were familiar with. After last week’s events, David now has a newfound confidence that is somehow even creepier than his shifty schizo norm. He was able to enamor Syd for long enough with his white room, but nobody else seemed fooled. Nevertheless, he went to Division 3 without any Summerland mutants, leaving them to yet again follow the trail to find him. Only this time, he is a dancing killing machine. 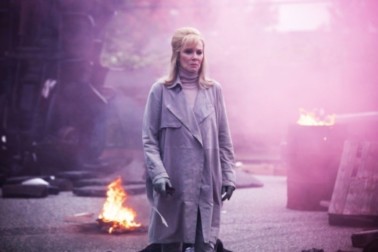 There are a lot of horrific moments sewn into “Chapter Five” but up near the top is the aftermath of David’s rampage on D3. Soldiers bodies strewn everywhere, many missing limbs. Faces melted in horror because they became one with concrete, a la Lenny in the pilot episode. But Lenny ain’t dead. Was she ever alive? Many of the questions raised about Lenny last week have been answered–she is a part of David’s “legion.” But what we thought was a legion might in fact just be one old…wait for it…mutant parasite!

Cary seems to have figured out the big question of what exactly the Yellow-Eyed Devil is. Apparently attaching to David as a young boy, the Devil is an old mutant feeding on David’s powers, splitting his mind and erasing imperative memories as a result. The Summerland group even get their first taste of the Devil–first on the infrared cameras in D3, then Syd’s full-on attack by the beast in David’s white room. LEGION went full-on horror film this week, topping D3’s massacre scene with Syd’s confrontation with the mutant living in David’s head. Seeing the freak waddling around as Syd screamed for help made my skin crawl, especially after watching it control David on the camera feeds. The way it made him dance and move was terrifying. Everything about the Yellow-Eyed Devil has been expertly done, he is a scary antagonist and he doesn’t need to say a word. 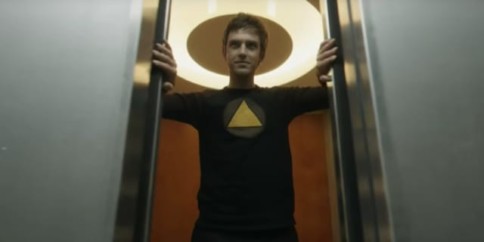 The climax of “Chapter Five” brought all of the major players together in the same room for the first time (David’s many personalities included). The utter silence of the entire scene, as the group searched David’s childhood home, brought the tension to a peak as Lenny reveals who she is to Syd. Up to this point, the action of the episode had been the aftermath of David’s havoc, but as Kerry says, “there’s always some action.” That’s what we have The Eye for! While it wasn’t entirely clear how this happened, The Eye had shifted into the telepath who had helped rescue David in the pilot episode and began shooting. It wasn’t the highlight of the episode by any means, but a tense crawl that gave us some answers as to the nature of the Yellow-Eyed Devil.

But as many questions as “Chapter Five” answered, it raised more. Melanie is still very vague about Oliver: she alludes that he was as powerful as David is, but that’s really it. Jemaine Clement was sorely missed this week, so we might have to wait a week or so to get any answers on his mysterious Oliver. Oh, and Amy chooses to finally inform David he’s adopted! Then there’s the ending. We go from Syd screaming for help to her coming out of a daydream in a mental institution, surrounded by David and everyone from Summerland. Lenny is even the psychiatrist leading the group! This throws everything we’ve learned up to now out the window if this was all really a dream. But it probably isn’t. Right before the quick shift of scenes, David is clearly doing something with his powers, intentional or not. As he said earlier in the episode after showing Syd the white room, he can create these spaces easily. Yet LEGION remains the least predictable show on television, so maybe everything was just a dream after all…