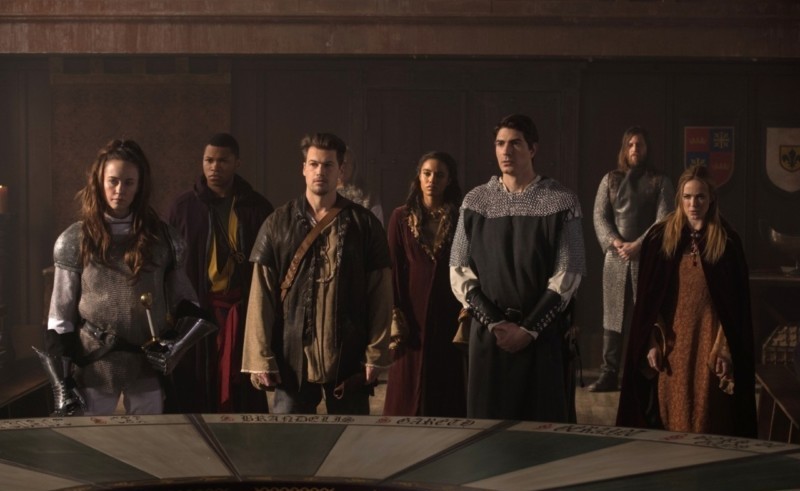 In a DC universe filled with puns, humor and general tomfoolery, DC’s LEGENDS OF TOMORROW shows that it is indeed the king of all that is listed above within the Arrowverse. The newest episode, CAMELOT/3000, is no exception.  The story for this episode was engaging enough. The episode started on a darker note, with Rip time traveling to the year 3000 to perform very rudimentary surgery on Dr. Mid-Nite in order to retrieve a piece of The Spear of Destiny. Following Gideon’s tracking ability, the crew then sets down in Medieval England, where they find themselves in King Arthur’s court. While the plot of this particular episode was all well and good, it was the dialogue that made Camelot/3000 stand out as another quintessential Legends episode.

The quick little quips between Steel and Vixen in the opening of Camelot/3000 show that their relationship might be hitting a rough patch already. It’s evident through that quick exchange that Vixen doesn’t have the same level of affection towards Steel that Steel does towards her. Keeping the conversation with Steel, his quick 180 from enthusiasm to wariness after being introduced to both the Knights and the Great Hall of Camelot was humorous. For future episodes, it established that the history he had been researching might not be entirely correct.

As much as the first half of Camelot/3000 was Steel’s episode, the second half was unequivocally Ray Palmer’s time to shine. His choice to stay and fight even after the Legends had recovered the piece of the spear they had come for established that Ray is immature in some ways. He sees things as either black or white, good or bad, and struggles to see the bigger picture sometimes. While this particular example was one that showed how noble and good-hearted he can be, this character flaw is definitely something to look out for, as it could land the Legends in a compromising position later down the line.

The subplot of Stein using Rory as a test subject only to see it backfire on him was extremely amusing. It seems that anytime Rory’s character is explored on it goes one of two ways, he’s either dumb as a rock or somehow he rises to the occasion and surprises the rest of the team. Examples of the latter are always amusing, as they usually seem to embarrass one member of the team or another. To see Victor Garber portray such a clearly perturbed and annoying Dr. Stein was certainly enjoyable, and again proves that he is one of the more gifted actors on the show.

Although his acting talents can certainly be appreciated, this episode marks another in a continuing trend of not having Firestorm appear. While the whole “scientist back at the base” thing works for Dr. Stein, it virtually renders Jefferson useless. This essentially cuts down the Firestorm character from 3 people to 1. At this point, one has to wonder if Franz Drameh, the actor who portrays Firestorm, has scheduling conflicts.

One thing about the name of this episode. Comic readers were probably hoping to see something more inspired by the DC series of the same name. This episode of Legends certainly is not that. For those not in the know, DC’s Camelot 3000 was a 12 issue series in which King Arthur, Merlin, and The Knights Of The Round Table are reincarnated in the year 3000 to fight off an alien invasion. While clearly not related to the comic, Camelot/3000 did live up to its title by having the show take place in both time periods.

While this episode is another of the “fighting in history” displays the series is becoming known for, it manages to keep things non-formulaic. This is fantastic, as it keeps the viewer guessing throughout. The reveal that Rip had the JSA help him scatter the shards of the spear was an exciting one, as there is now hope that the show will continue to introduce more and more of these characters to the Arrowverse. The ending of Camelot/3000 was perfect, as the viewer instantly came to the same conclusion as Rip: Gideon still considers him to be the captain. This premise should make for a great episode next time. Seeing as the title of the next episode is LAND OF THE LOST, there definitely is a reason to believe things should get a little crazy.