A fun foray into the supernatural workings of the DC Animated Universe, JUSTICE LEAGUE DARK takes B, C, and D-list heroes and throws them headlong into the fray, even as it familiarizes us with them through necessary exposition. The film is tasked with introducing these heroes to a new generation of fans whilst ensuring that longtime followers of the material are left satisfied. It juggles this responsibility with the kind of sure-handedness you’d like to see from a film of its kind, occasionally fumbling but always managing to regain control of its pieces. It’s competently made animated fare that’s bolstered even further by stellar voice acting and a particularly compelling final act, cementing it as one of Warner Bros. Animation’s most inspired efforts since 2013’s JUSTICE LEAGUE: THE FLASHPOINT PARADOX. 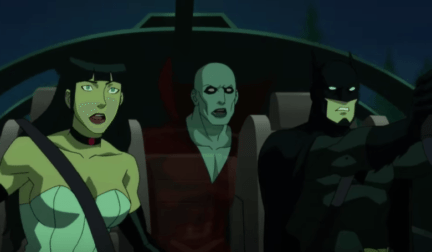 Following a series of heinous crimes committed by well-behaved citizens, Batman, Superman, and their studly stalwarts enlist the help of occult detective John Constantine and a team of darkness-detaining heroes that includes magician Zatanna, Deadman, Etrigan the Demon, the beastly Swamp Thing, and the quiet, enigmatic Black Orchid. Despite their power and prowess, the Justice League isn’t equipped to fight every kind of threat thrown its way. With this truth kept in mind, Batman embarks on a mission to find Constantine and company and fight the forces amassing against the League and the living.

WATCH: The ComicsVerse interview with Jason O’Mara, the voice of Batman in JUSTICE LEAGUE DARK

The DC Animated Universe (DCAU) runs parallel to the live-action DC Extended Universe (DCEU), never intersecting with it but sharing its aims to explore and expand the worlds introduced to us over decades’ worth of published work. While the DCAU has delivered its fair share of duds, it tackles its stories with more flair, more fervor than its live-action complements.The washed-out gray/blue tinges and hues that characterize the aesthetic of the DCEU are replaced with an array of colors that pulse and pop. The heroes are quick and quippy. There’s even a payoff between Etrigan’s human host, Jason Blood, and Constantine. Put simply, the action focuses on the characters in the action instead of the action itself. We care about them. We care about their fates.  JUSTICE LEAGUE DARK fits all of these strengths into its lean runtime even as it filters out the filth that muddies the universe and its workings. It’s a well-made, well-balanced entry in an ever-expanding canon, one that raises the bar for future installments in the DCAU. 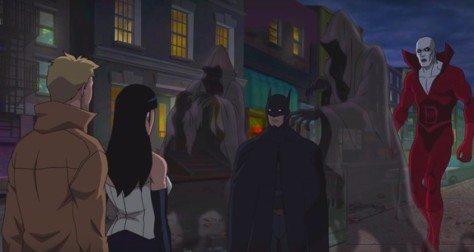 Writer Ernie Altbacker lends his deep love and understanding of DC lore to Jay Oliva’s confident direction, immersing viewers in a familiar world while simultaneously introducing them to complex new characters with complex sets of powers. J.M. DeMatteis and Heath Corson, two writers regularly tapped to pen entries in the DCAU, leave teleplay duties to Altbacker, who proves himself an expert at creating situations and scenarios in which these characters can learn and grow. DeMatteis assists with the story, but it’s Altbacker and Oliva who do the creative heavy-lifting here. There are many moving pieces that could’ve resulted in clutter, but under Oliva’s watchful, careful eye, the story remains tight, focused, and undeniably gripping.

WATCH: The ComicsVerse interview with Matt Ryan, the voice of Constantine in JUSTICE LEAGUE DARK

Despite a puffy-looking Superman and a Deadman whose lips look like they were targeted by a swarm of bees, the animation on display in JUSTICE LEAGUE DARK is rendered gorgeously and realized imaginatively. The DCAU’s art style varies slightly from film to film, so it’s not surprising to see differences in the aesthetic. The way the characters move, talk, and fight carries more subtleties than they do in previous installments, which helps bring the characters to life in ways that other animated films can’t pull off.

A joyful experiment, JUSTICE LEAGUE DARK stands as one of DC’s biggest risks to date. Viewers are expected to root for and care about these characters despite the fact that many will have little to no idea who they are or where they fit in the DC canon.  This team doesn’t carry quite the same clout as the Justice League we’ve grown so close with, but they represent a cobwebbed corner of the DC Universe that definitely deserves a bit of dusting. It’d be nice to see more of Etrigan, whose relationship to the villain serves as the crux of the film and deepens the lore established here. Swamp Thing and Black Orchid are robbed of screen time, so it’d be fantastic to see more of them as well. However, given the fact that the filmmakers had miles of ground to cover in a remarkably short time, it’s hardly a gripe. JUSTICE LEAGUE DARK serves as a reminder to filmmakers that great risks can bring great rewards.